The Time a Dead Pope Was Put on Trial

Trials are often complex things that can go through some unusual twists and turns. This can happen at the best of times, even in modern days, but it sometimes got altogether more bizarre in days past. While there are numerous strange trials and cases throughout history, perhaps one of the most bizarre is the time they dug up a dead pope to sit his lifeless corpse up at his own trial.

The time was the 9th century, and it was a time of upheaval and power struggles within the Roman Empire. By the 800s, the glory days of the Roman Empire were fast fading, and the death of the Roman Emperor Charlemagne caused the Empire to crumble further, as differing factions, fiefdoms, and dynasties vied for control, sparking violent feuds and power struggles across the Italian peninsula. Stuck in the middle of this intrigue and turmoil was the Vatican, which was already divided itself. At the time, Popes were not really looked up to as spiritual leaders, but were rather seen as diplomatic tools to be put into power and influence by the enemy, and as such they were not elected for their standing in the church but rather through which sides they chose.

It was during this tumultuous time that there lived a missionary by the name of Formosus, who had proven successful enough to get the position of cardinal bishop of Porto, Italy. During his tenure Formosus had made deep connections with various powerful parties, such as the Bulgarian prince Bogoris, Constantinople, and the Carolingian court, and Arnulf of Carinthia, a Frankish king of the Carolingian imperial dynasty. This growing influence didn’t sit well with many, least of all reigning pope John VIII, who invoked charges against Formosus including being a traitor, coveting the papacy, seeking to rule over more than one place at a time, and plotting to become the archbishop of Bulgaria. These charges saw Formosus excommunicated and sent into exile in 876, but this wouldn’t last long.

When John VIII was assassinated Formosus was reinstated, and the papacy would then see three more popes, Pope Marinus I, St. Adrian III, and Stephen V come and go in quick succession. In 891, Formosus was unanimously elected to the office, but he was in a tight spot. Before he was made pope, a new emperor had managed to take the reins of the Empire, Guy III of Spoleto, but Formosus distrusted him, and so created diplomatic relations with Arnulf of Carinthia, who tried to attack Rome with Formosus’ help to usurp Spoleto control. Formosus would later crown Arnulf the new Emperor of Rome and then die a few years later in 896 after his rather disastrous and controversial papacy, but he would not be forgotten.

The successor of Formosus, Pope Boniface VI, lasted just 2 weeks before dying (it was a tough time to be a pope), and then came Stephen VI, who would end up sympathizing with Guy III of Spoleto’s son, Lambert. It would turn out that the Spoleto family had not forgotten their betrayal at the hands of Formosus, and sought to tarnish and spite his reputation even in death by finding him guilty of the crimes that had originally had him excommunicated during the papacy of John VIII. It was decided to convene a type of ecclesiastical council or trial for issues related to faith, called a synod, but how could Formosus be put on trial when he was dead and buried? For Stephen VI the answer was simple- just dig him up and have him attend anyway.

Formosus was disinterred from his grave, dressed up in his pontifical robes, and propped up in a throne for the trial at the Basilica San Giovanni Laterano, where various cardinals, bishops, and other important church dignitaries were in full attendance for the macabre spectacle. Since he obviously could not speak for himself, the Pope assigned a deacon to be Formosus’ ears and mouth, and to speak for him. He was then read the charges of coveting the papacy, ruling over more than one place at a time, and of breaking canon law, with the court addressing the dead man propped up in his seat directly. The deacon did his best to defend Formosus, but he was mostly reading from prepared statements and it is thought that the results of the trial had been decided before it even began, making it a losing situation. It was all a rather surreal sight, seeing these charges shouted at a lifeless corpse, and it was made even more bizarre by an earthquake that shook the basilica and damaged part of it during the proceedings, now known as the “Cadaver Synod.” 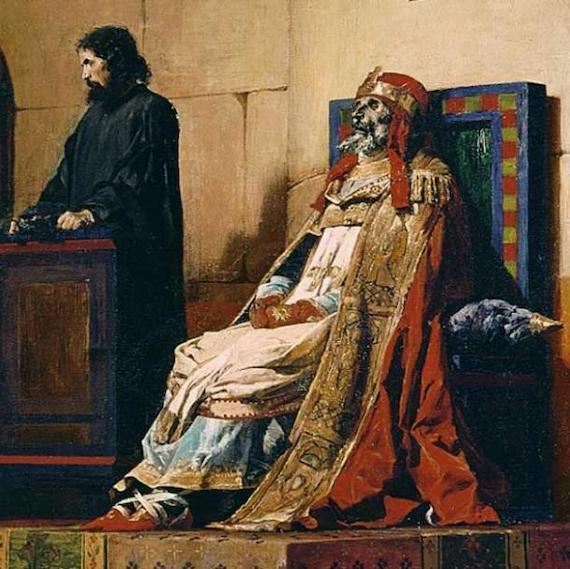 To the surprise of absolutely no one, Formosus was found guilty as charged, and the punishment was fairly severe, although he was too dead to really appreciate the gravity of it all. He was stripped of the title of pope, all of Formosus’ reign and decrees were totally stricken and voided, as were all of the appointments he had granted to various bishops, and his robes were all taken away. The court then lopped off the three fingers of his right hand he had used in consecrations and blessings, and his body was unceremoniously buried again in an anonymous plot. Even then Stephen VI was not finished, and decided to have Formosus dug up yet again so that his corpse might be tossed into the Tiber River as one last act of desecration and disrespect. Apparently the body was later found bobbing about in the river by monks and hidden away.

In the meantime, the morbid trial and aftermath had angered many people in Rome, and made Stephen VI quite unpopular among the people in general. Riots broke out and the Pope was captured by the mobs and sent to languish in prison, where he would ultimately be strangled to death. In a fitting twist, Formosus ended up having the last laugh when his body was then brought to St. Peter’s Cathedral to be buried yet again with full Christian honors in 897, and shortly after this he was reinstated by Pope John IX, who also incidentally made it illegal to ever put a corpse on trial again. To this day, Formosus is recognized as having once been pope, his name has been completely cleared, and he remains the only pope to have ever been put on trial while dead. It is an unusual historical oddity that is mostly forgotten, but which is bizarre enough to still instill wonder and raised eyebrows. It really was a different time, and one hopes that the practice of bringing the dead physically to their own trials is long gone.