When Wild Humans Once Roamed the U.K.

In my concluding article on the matter of the British Bigfoot, I made a brief reference to sightings of wild and feral people in the U.K. centuries ago. So, today, I thought I would expand on this subject. We'll begin with the Woodwose. Unlike the classic Bigfoot of the Pacific northwest regions of the United States, or the Abominable Snowman of the frozen Himalayas, the Woodwose was – despite its often-reported abundance of body hair - far more human-like in its appearance and nature; something that has led to deep speculation that the legends of such creatures might very well have had their origins in sightings of so-called feral people: human-beings who, either by choice or unfortunate circumstances, lived solitary lives, deep in the heart of the woods and, as a by-product, descended into states of definitive savagery. Then there is the astounding theory that, possibly, the tales of the Woodwose were born out of occasional sightings of pockets of ancient humans, such as Neanderthals, or people of the Neolithic era, who, rather incredibly, may have survived long after conventional wisdom and science tells us they became utterly extinct or absorbed.

In 2011, author and creature-seeker Neil Arnold noted: "Many years ago when I first began writing for Animals & Men magazine [the Center for Fortean Zoology’s in-house magazine] I mentioned to Jon Downes something regarding cryptozoological pub signs. There are many St. George and the Dragon signs, and I know a few which also mention unicorns. However, one particular pub sign, which is of great interest to me is that which belongs to the Wild Man pub at 29 Bedford Street in Norwich, Norfolk. Now, most pub signs have a meaning, but the legend which pertains to the Wild Man is extremely intriguing. So the folklore states, many, many years ago a six year old boy named Peter became lost in a wood in Germany. Around six years later the boy had grown wild, and in naked form would prowl the woods, living alongside the resident animals. Eventually he was found and picked up by a traveling showman who exhibited throughout Europe." As Neil also said: "St. Mary’s Northchurch adds more to the legend, for within its walls there is an inscription which reads: “To the memory of Peter, known as the Wild Boy, having been found wild in the forest of Hertswold near Hanover in the year 1725. He then appeared to be about 12 years old. In the following year he was brought to England by the order of the late Queen Caroline, and the ablest masters were provided for him.

"But proving himself incapable of speaking, or of receiving any instruction, a comfortable provision was made for him at a farm in this parish, where he continued to the end of his inoffensive life. He died on the 22nd of February, 1785, supposed to be aged 72.”’ And there the inscription ends. But why was there an association between wild Peter and the Norwich-based pub itself that led the owner to even name the inn after the slightly tragic soul? Neil provides the answer: "Around 1751 Peter was housed at the public house. In the past the sign would depict the unfortunate chap as a demonic character amid flickering flames. Now the pub sign shows him frequenting the forest alongside bears."

And still on the subject of pubs and primitive people, there's the matter of the wild man of Sproughton, Suffolk. Although some of the stories of the wild man of Sproughton portray him as having been nothing more mysterious than a mad, homeless vagrant who dwelled in the woods and lived a distinctly lawless life, there is a possibility that he may have been something else entirely. On the north side of the River Gipping, which runs from Stowmarket to Ipswich, is a place that just happens to be called – and has been called, for as long as people have inhabited those ancient parts – Devil’s Wood, where significant archaeological finds from both Neolithic and Paleolithic times have been made.

That Sproughton is only twelve miles from Stowmarket, and just three and a half miles from Ipswich, that ancient man lived in this very area, and that the place itself became associated with the Devil, collectively suggests a distinct possibility that the wild man of Sproughton may have been far more than a mere eccentric vagabond or hermit type, after all. Maybe, incredibly, he was one of the very last of his kind, perhaps even a Neolithic survivor, one who made his lair in old woods that, not surprisingly – given the man’s wild appearance and mysterious presence - became so linked with matters so dark and devilish.

Still on the matter of strange-looking people living wild in Suffolk and, in the process, provoking myths and tales of enigmatic feral-style entities, there's the famous story of the green children of Woolpit (which is also associated with the even more renowned tale of the Babes in the Wood), a village situated between the towns of Bury St. Edmunds and Stowmarket. So the tale goes, back in the 12th Century, a young girl and boy, of strangely green-hued skin, appeared in Woolpit one day, claiming to have come from a magical place called St. Martin’s Land, which existed in an atmosphere of permanent twilight, and where the people lived underground, on nothing but green beans. While the story has been relegated by many to the realms of mere myth and folklore, it may not be just that. It might, actually, be much more. According to the old legend, the two children remained in Woolpit and were ultimately baptized by the villagers, who accepted them as their very own. And although the boy ultimately grew sickly and eventually died, the girl did not. She thrived and finally lost her green-tinged skin to normal colored skin of healthy appearance. 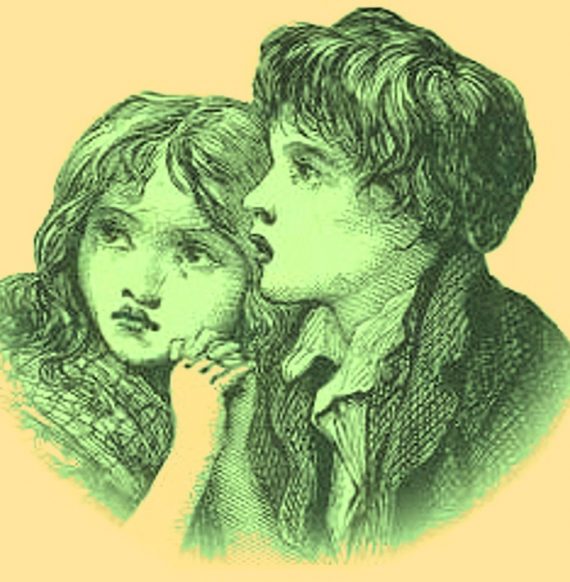 There is also the matter of the wild man of Orford, Suffolk. Consider the following account of one Ralph, a monk and an abbot at Coggeshall, Essex. Recorded in the year 1200 in Chronicon Anglicanum, it describes the remarkable capture in the area of a wild man of the woods-style creature: "In the time of King Henry II, when Bartholomew de Glanville was in charge of the castle at Orford, it happened that some fishermen fishing in the sea there caught in their nets a Wildman. He was naked and was like a man in all his members, covered with hair and with a long shaggy beard. He eagerly ate whatever was brought to him, but if it was raw he pressed it between his hands until all the juice was expelled. He would not talk, even when tortured and hung up by his feet, Brought into church, he showed no sign of reverence or belief. He sought his bed at sunset and always remained there until sunrise. He was allowed to go into the sea, strongly guarded with three lines of nets, but he dived under the nets and came up again and again. Eventually he came back of his own free will. But later on he escaped and was never seen again."

Finally, you'll note that all but one of the cases I referred to above originated in the county of Suffolk, England. And the remaining case - that inspired the name of Norwich's Wild Man pub - is located just one county away: in Norfolk. All of this makes me muse on the possibility that, centuries ago, there may well have been surviving pockets of feral people hiding throughout Suffolk. Amazing? Definitely. True? It just might be.

The Times When a Single Person Averted a Nuclear War