Back to Possible Alien Spaceship for ‘Oumuamua

It was a strange interstellar comet, it was a stranger spaceship, it was an interstellar asteroid, it was something else, and the latest -- it's a frozen hydrogen-sicle. And now, the cigar-shaped unknown space object from another solar system is back to being a spaceship … or at least a piece of alien technology. That’s the latest from two leading astrophysicists who have been watching and commenting on 'Oumuamua ever since it showed up unannounced in 2017 and has been inspiring debates, exploration suggestions and occasional concern ever since.

“The first interstellar object observed in our solar system, 1I/2017 U1 ('Oumuamua), exhibited a number of peculiar properties, including extreme elongation and acceleration excess. Recently, Seligman & Laughlin proposed that the object was made out of molecular hydrogen (H2) ice. The question is whether H2 objects could survive their travel from the birth sites to the solar system.”

Avi Loeb, a Harvard astrophysicist, and Thiem Hoang, an astrophysicist at the Korea Astronomy and Space Science Institute, sprang into action as soon as astrophysicists Darryl Seligman, University of Chicago, and Greg Laughlin, Yale University, released their research paper in May 2020 proposing that ‘Oumuamua was formed in a giant molecular cloud (GMC) and is composed of molecular hydrogen ice – a giant cigar-shaped interstellar hydrogen iceberg. Seligman and Laughlin tied their theory to the idea that outgassing or evaporating hydrogen ice wouldn’t be visible from Earth --- explaining the mystery of how ‘Oumuamua could be a comet if it didn’t have a tail, especially when it accelerated out of the solar system.

“Assuming that H2 objects could somehow form in the densest regions of GMCs, we found that sublimation by collisional heating inside the GMC would destroy the objects before their escape into the ISM [interstellar medium]. We also studied various destruction mechanisms of H2 ice in the ISM. In particular, we found that H2 objects are heated by the average interstellar radiation, so that they cannot survive beyond a sublimation time of tsub ~ 10 Myr for R = 300 m (see Figure 1). Only H2 objects larger than 5 km could survive.” 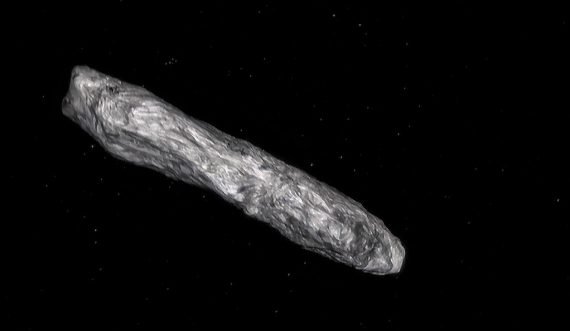 “Not so fast!” said Loeb and Hoang. In their response, published in The Astrophysical Journal Letters, they point out that the closest GMC is too far away for a hydrogen iceberg to survive the trip (due to the heat generated by cosmic collisions) and would probably not even survive an exit from a GNC. Loeb admits that, while this knocks ‘hydrogen iceberg’ off the “What’ is ‘Oumuamua?” list, we still don’t know for certain what it is. Fortunately, the Vera C. Rubin Observatory (VRO) is scheduled to become operational next year and he believes it will detect “one ‘Oumuamua-like object per month.” If they can’t figure out what it is with that kind of data, they need to turn in their astrophysicist club membership cards.

‘Oumuamua as alien technology disguised in a crust of space debris – proposed by Loeb in 2019 – was never disproved, just pushed down on the list of possibilities. With hydrogen iceberg joining the “Nope” list, it can move up again until the VRO collects more data or a human spaceship launched in time to catch ‘Oumuamua before it leaves the solar system.

Place your bets on your favorite now.