A man snapped a photograph of what appears to be a ghostly face looking out of a school window. The picture has caused residents in Dennistoun, Glasgow, Scotland, to be completely creeped out after Martin Monaghan posted the photo to the Facebook group called Dennistoun Information Page.

So, what’s creepier than one face looking through the window of an old abandoned school? The answer is: two faces! Yes, that’s right, upon further inspection of the photo, it appears as though there are two faces side-by-side looking out of the window. And according to Martin, he showed the picture to “paranormal experts” who said that the image is “unexplainable”.

Members of the group were quick to point out that there have been many rumors circulating about a young ghost girl who is said to roam around the top floor hallways. Others mentioned that the ghostly faces resemble Donald Trump and Boris Johnson.

Even though Martin posted the picture on social media, it was actually his friend John Stewart who took the photograph in January of this year. He actually didn’t see any figures in the window when he was snapping pictures, but after he got home and was looking through his photographs, that’s when he noticed the ghostly faces.

In an interview with Glasgow Live, Martin explained what happened on the day that his friend took the eerie picture. “John was out with a couple of friends taking pictures of Golfhill School. The school is due to be demolished soon and the friends wanted some pictures to remember the school,” he said, adding, “John said: ‘I am not really a big ghost enthusiast but this image certainly haunted me and my friends’.” He went on to say that they went back to the location approximately a month ago and shined a light from a torch at the window but they couldn’t see anything. “We are non-religious and don’t believe in ghosts but when you see something freaky you can’t unsee it.” 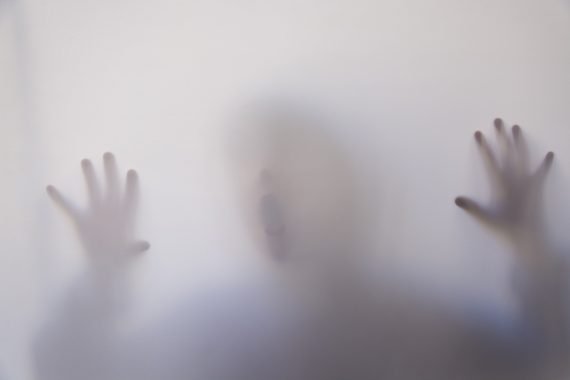 The old Golfhill School is in poor condition after being neglected since 2007 and based on the picture that John took, it seems as though it is home to at least one ghost. You can decide for yourself if there is a face (or possibly two) peering through the window of the old school as the photograph can be seen on Dennistoun’s Facebook page as well as here.