A dinosaur that was the size of a dog, had razor-sharp teeth, a beak-like jaw, and ate anything from insects to turtles and lizards, may be a “ghost” ancestor of the Triceratops and armored Ankylosaurus. The species that’s called Sacisaurus agudoensis roamed the Earth approximately 230 million years ago.

Based on the studies performed by Brazilian researchers, the species was the size of a Labrador – about four feet in height by five feet in length and weighed approximately five stone (32 kilograms or 70 pounds). It had a long neck with a slim, athletic body, and walked on four legs. Actually, its legs were very unusual as its long and slim forelimbs were unlike other early dinosaurs that had short forelimbs and walked on two legs.

The Sacisaurus species is a very important discovery as it helps to fill in missing information regarding the evolution of ornithischians and could be the “ghost lineage” that scientists have been looking for. As a matter of fact, researchers believe that some silesaurids (which includes the Sacisaurus) may have actually survived the devastating volcanic eruption that caused a mass extinction 200 million years ago.

Dr. Rodrigo Muller, who is from the Federal University of Santa Maria, as well as an undergraduate named Mauricio Silva Garcia, analyzed several fossilized bones that were located in prehistoric animal graveyards found in the United States, South America, Africa, and Europe. “[This discovery] shakes the family tree by its roots,” Dr. Muller told South West News Service.

He went on to say, “The ornithischians include the famous horned and armored dinosaurs from movies,” adding, “Their origin and evolution is one of the hardest challenges for palaeontologists. They are well known from Jurassic and Cretaceous deposits.” “But there are none in the fossil record from the Triassic. Sacisaurus solves this vexing problem. We show the silesaurids are the direct ornithischian ancestors.” 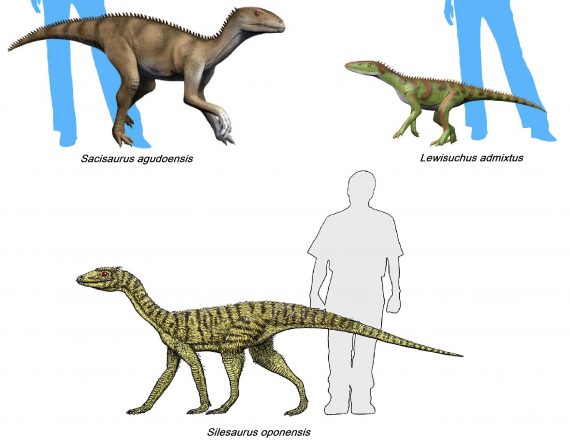 Since the Sacisaurus species had a very omnivorous diet and pretty much ate anything it could find, it wasn’t considered to be an apex predator and was more of a primary or even a secondary predator. As for what dined on them, they would have been eaten by large crocodile-like reptiles as well as carnivorous theropod dinosaurs. Several pictures of what the Sacisaurus would have looked like can be seen here.

The study was published in Biology Letters and can be read in full here.