Giant marine creatures that resemble a bug can grow as large as a puppy and a newly discovered species is one of the biggest ever found. These types of crustaceans are isopods and there are approximately 10,000 species of them that live in the water as well as on land (even deserts and mountains) in different parts of the world and they can grow as large as 20 inches in length while others are only a few millimetres long.

The Bathynomus genus is a type of isopod that lives in the ocean and is nicknamed the “Darth Vader of the Seas” probably because its head looks similar to Darth Vader’s helmet. The newly discovered species – called Bathynomus rakasa – was found in the Indian Ocean back in 2018. As a matter of fact, it is the first new species of giant isopods found in over a decade and the first time ever that it has been found near Indonesia.

During the South Java Deep Sea Biodiversity Expedition, researchers found a male and a female far below the surface of the water between 3,117 and 4,134 feet deep off the southern coast of Java. They were able to confirm that this was a new species based on the odd shape of its head shield in addition to its abdominal segments and the dozen or so spines. 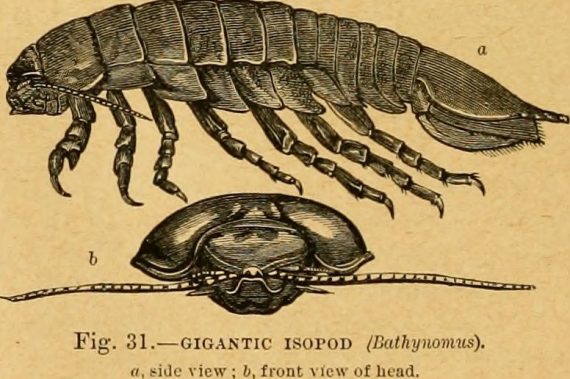 According to the National Oceanic and Atmospheric Administration, isopods in general have compound eyes, four sets of jaws, two pairs of antennae, and a body with seven segments with each segment having its own pair of walking legs.

In the study, the researchers stated that seven of the sixteen previously studied Bathynomus species were “super-giants” as they grew to at least 12 inches in length. And the Bathynomus rakasa species grows to an average of 13 inches long.

Several pictures of this new species, including a photo of one of the expedition members holding one up in front of the camera, can be seen here.

They are also quite terrifying as a video surfaced in 2019 of football-sized isopods ripping apart an alligator to feed on. And that’s not the most disturbing thing as isopods’ parasitic cousins (known as tongue biters or tongue-eating louses) completely destroy the tongue on fish by cutting off the blood supply and taking the place of the organ inside of the still-living creature’s mouth. Now that’s disturbing...

The ocean is huge and it’s not surprising that new species are often being found. “The identification of this new species is an indication of just how little we know about the oceans,” stated Helen Wong, who is a researcher with St. John’s Island National Marine Laboratory, part of the Tropical Marine Science Institute at the National University of Singapore as well as a co-author of the study. She went on to say, “There is certainly more for us to explore in terms of biodiversity in the deep sea of our region.”