The recent revelations by The New York Times that the Pentagon has a funded program to investigate UFOs and UAPs resulted the Times, the Pentagon and some of the parties named in the article to point out that these UFOs/UAPs are by no means alien vehicles and that they’re more concerned about national security than extraterrestrials. If that’s the case, then the gook folks in Palo Verde, Arizona, would like to know why this group isn’t investigating mysterious drones that were seen over the Palo Verde Nuclear Generation Station on multiple nights last September. Perhaps they should has the residents of Colorado and Wyoming who are still waiting for an explanation of the drone fleets seen there late last year. Are these secret operations or is the government covering up its ineptitude in protecting its citizens from these mysterious drones?

“A new report indicates there was a “drone-a-palooza” incident over the Palo Verde Generating Station, operated by the Arizona Public Service (APS), west of Phoenix in 2019.

The incident was first obtained with a Freedom of Information Act (FOIA) by Douglas D. Johnson with the Scientific Coalition for UAP Studies. The findings were made public in The War Zone.”

AZFamily.com, AZCentral.com and other local media sources sounded the alarm last weekend after The War Zone/The Drive did an expose late last week on the mysterious drone incidences at the Palo Verde nuclear facility on September 29th and 30th of 2019. The War Zone got its information from Douglas D. Johnson, a volunteer researcher affiliated with the Scientific Coalition for UAP Studies (SCU), who obtained dozens of pages of heavily redacted Nuclear Regulatory Commission internal documents on the incidents.

"Officer noticed several drones (5 or 6) flying over the site. The drones are circling the 3 unit site inside and outside the Protected Area. The drones have flashing red and white rights and are estimated to be 200 to 300 hundred feet above the site. It was reported the drones had spotlights on while approaching the site that they turned off when they entered the Security Owner Controlled Area. Drones were first noticed at 2050 MST and are still over the site as of 2147 MST. Security Posture was normal, which was changed to elevated when the drones were noticed. The Licensee notified one of the NRC resident inspectors.

As of 0237 EST, no drones have been observed at the site since 2230 MST. Officers believe drones were over 2 feet in diameter.”

The report on the incidents the following night are similar and went to the NRC's Intelligence Liaison and Threat Assessment Branch (ILTAB), which admits it can’t do anything about drone reports at nuke plants. Plant management contacted local law enforcement, the FBI, the Department of Homeland Security (DHS), the Federal Aviation Administration (FAA) and the FBI's Weapons of Mass Destruction (WMD) Coordinator. They apparently decided to monitor the drones rather than knock them out of the air, even though they were over a designated national security sensitive facility. The NRC documents also showed that these were not isolated incidents at Palo Verde. 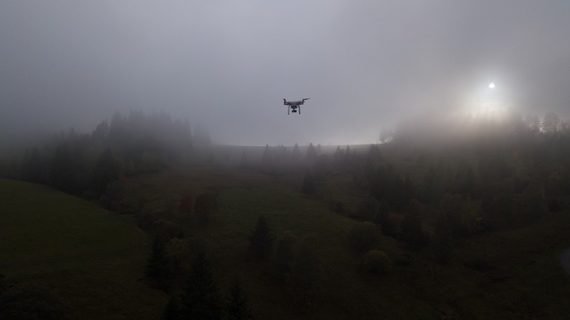 “Arizona’s Family reached out to MCSO (Maricopa County Sheriff’s Office) for more information about these drone sightings over Palo Verde Generating Station. We are awaiting a response.

At this time, it is unclear who was operating the drones in the restricted airspace and what their intent was.”

After finding out about the incident through the War Zone report, Arizona’s Family contacted MCSO late last week and received no response as of this writing. Arizona Public Service (APS), the electric utility and subsidiary of the publicly traded Pinnacle West Capital Corporation which runs the facility, did confirm the incidents when contacted and its officials said “the potential for damage from a drone is small compared with natural hazards that the plants were built to handle.”

Does that make you feel any better?

“Nobody except the drones' pilots knows whether this was a case of hobbyists touring the plant out of curiosity, or something much more nefarious, intended to disrupt a massive power source for customers from Texas to California. And nobody in any official capacity seems to know who piloted the drones that night or the next.”

It didn't make AZ Central feel better. All of these official downplays and references in the report to a “drone-a-palooza” mix the big point – local residents are concerned about the lack of identity of these drones nearly a year later.

When will government officials learn that “Move along … nothing to see here” doesn’t work anymore?

(Kudos to The Drive for its coverage of this and AZFamily.com and AZCentral.com for their followups.)