Throughout the world a pervasive paranormal phenomenon is that of ghost lights, often also referred to as spook lights. Tales of such mysterious lights in the wilderness feature in the local lore and stories of places all around the world, and it is a surprisingly common phenomenon across regions and far-flung cultures.  Certainly a place with a rich history permeated by such tales is the country of Japan, which has a vast array of ghost light stories and myths from every corner of the nation stretching back through time, encompassing many aspects of the ghost light phenomenon.

One of the most frequently mentioned types of ghost light reported from all over Japan are the hitodama, which literally translates into “human soul.” They are supposedly exactly that, the souls of the dead separated from their bodies to fly about the night like fireflies. They go by many names depending on the area, such as the tamase in Chiba prefecture or the tamagai in Okinawa, but they are typically described in the same way, being bright orbs of blue, orange, or red, sometimes even trailing a tale behind them as they go. According to the lore they will typically appear within 2 or 3 days after a person has died, they are often said to gravitate towards temples and new born babies or pregnant women, and in most regions they are said to be most active on rainy nights. These hitodama are not merely confined to folklore, but are often spoken of in paranormal circles in Japan, with many sightings and purported photographs taken of the phenomenon. 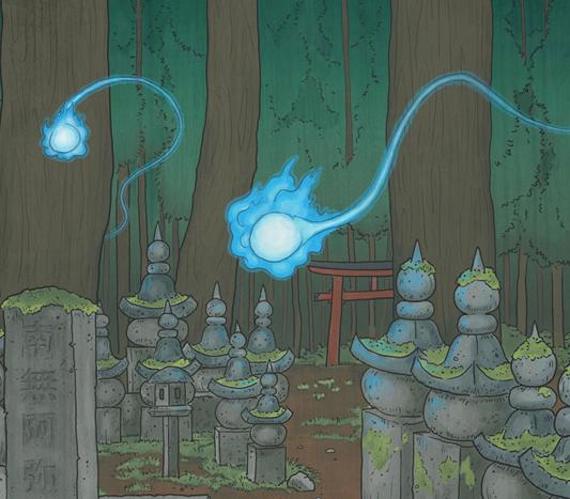 One type of hitodama spoken of in Nara, Miyazaki, and Kōchi Prefectures is called the Janjanbi, which derives from the sound they purportedly make, most often described as sounding like “jan jan,” able to be heard before they appear. Depending on the area, the origins of the Janjanbi differ, but they are usually said to be the souls of the tragically deceased. In Nara City they are said to be the souls of two lovers who committed suicide, only to be buried in separate temples, and they can be seen over the Fūfu River, where they will meet, fly around together, and then go back to their respective solitary graves. If they notice a witness, they are said to sometimes approach the startled person or even chase them, depending on their mood. In other areas the Janjanbi are drawn to bridges, and in some traditions they can be called out and encouraged to approach by saying “hoi hoi.” The lights are usually said to be the souls of lovers, but at Tōichi castle, in Gifu Prefecture, it is said to be the soul of the military commander Tōtada Tōichi. Whatever they are, they have never really been adequately explained.

Another type of ghost light reported in the folklore of many areas of Japan is called the Kitsunebi, or “fox fire," which typically appear as mysterious floating flames like those of paper lantern or a torch, usually orange or red in color, and which will flicker and vanish, only to reappear again further away. They are said to be most active during hot summers, and can reportedly often be seen in processions of up to hundreds of the lights in a line. As with many Japanese tales, the behavior of the lights will vary from area to area, but they are mostly seen as tricksters, with their name coming from the word kitsune, or “fox,” itself well known in Japanese folklore as a trickster spirit. As such, the Kitsunebi are often said to follow people and try to confuse them, get them lost, or cause problems such as fevers or other ailments, and they are often very similar in nature to the legends of Will O’ Wisps, drawing people deeper and deeper into the wilderness, although in other traditions they will guide the way or are seen as a good omen. Like the others we have looked at here, the Kitsunebi have been sighted frequently right up into modern times, and seem to signify an actual phenomenon. 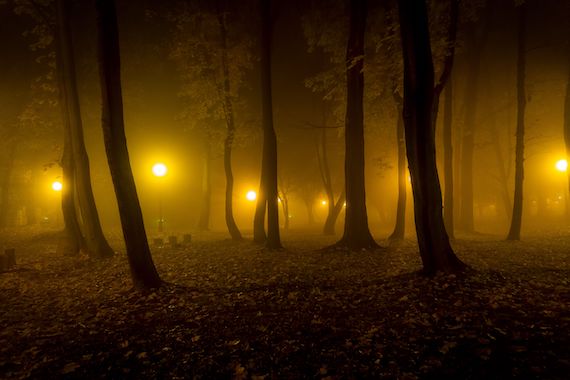 On the island of Kyushu we have a type of well-documented atmospheric ghost light phenomenon called the Shiranui, which comes from Shiranu- hi, or “unknown fire.” These lights will typically appear out over open water in the Yatsushiro Sea and the Ariake Sea, and start off as just a couple of flames, which then multiply until there can be hundreds or thousands of the lights stretching out over miles. The phenomenon is said to occur during the lowest tide, and oddly cannot be seen from the water’s surface, but rather from a vantage point at least 10 meters above the surface. The lore says that if one is to try and approach them, the lights will appear to get further away vanish altogether, and in the old days they were seen as sort of a bad omen, with fishing typically being cancelled when the Shiranui were out. There are many historical accounts of people seeing these lights, such as that of author Nakashima Hiroashi, who wrote of them in 1836:

Many people gather to witness Shiranui even from remote areas. I myself watched Shiranui many times. The Shiranui appears 8 to 12 kilometers distant from the seashore, but it was not sure since it was very dark. At first, one or two spots of fire appear late at night. This is named oya-dama or father fire. Then, the distance between the fires becomes longer, and subsequently, spots of fires appear and disappear as time goes by, and late at night it may become continuous. The lights appear like stars. At dawn, they disappear. When rain and strong wind come, Shiranui does not appear. Many people watch Shiranui from mountains, and they enjoy drinking sake there.

From time immemorial, the Gulf of Shimabara, (near Ariake Sea), has been famed for Shiranui, the unknown fire, which appears from time to time. The phenomenon occurs twice a year, about 30 September and 24 February, from some time after midnight until the approach of dawn. Sometime the light is a large ball of fire rising from the surface of the sea to a height of 60 feet; sometimes it is a line of pale red, fiery globes drifting and down the tide.

Indeed, so well known is the Shiranui phenomenon that it has attracted the attention of many over the centuries who have tried to study and measure it, ranging from scientists to ghost hunters, and it is mostly nowadays explained as some sort of optical illusion caused by atmospheric phenomena. Some ghost lights of Japan are a bit more sinister in nature than any of these. In various area of the country are the tradition of what are called the Tenka, or also Tenbi, which are often said to appear as a floating light like a lantern, and which will sometimes enter houses to make those within ill. They are also known to set houses on fire, and are traditionally seen as a type of vengeful, wrathful spirit known as a onryō, typically one who has been wronged in life. In some areas these lights could be driven away by surrounding them and reciting Buddhist prayers or fanning them with a type of sandal known as a setta. 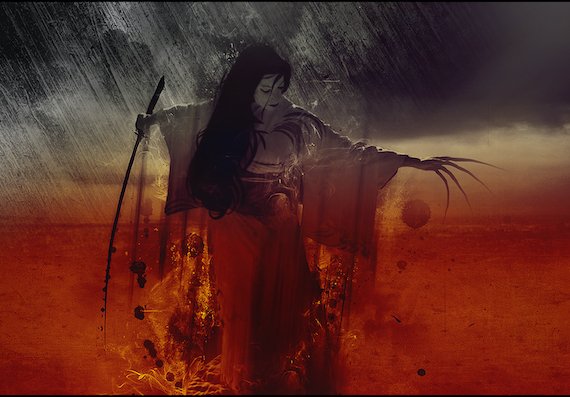 Similarly to the Tenka is a type of demonic flaming light called the Rōjinbi, or “old person fire,” which appears in what are now called Nagano and Shizuoka prefectures. The fire balls will appear deep in mountainous areas, usually in the presence of an elderly person, and it is said to be unable to be put out with water or any other normal means. In order to extinguish it, one can use animal skins to smother it, or hold one’s footwear over one’s head, which will cause it to go away. The worst thing to do is panic and run, because this will draw its attention and it will chase you. There is also the Ubagabi, or “old woman fire,” of the Kansai region of Japan, which appears as a ball of fire with a length of one shaku (about 30 centimeters) and is said to be the spirit of an old woman cursed after stealing oil from a shrine. The Ubagabi will supposedly accost travelers by smashing into them or grazing them, after which the unlucky victim will later pass away within 3 years. Supposedly the only way to make it go away is to say “abura-sashi," which basically means "oil pourer.” Like many other ghost lights of Japan, the stories of the Ubagabi differ depending on the area, but it is never something you want to come across.

Do any of these ghost lights have any basis in reality, or are we dealing with mere folklore and myth? To this day such lights have been seen in the wilds of Japan, and if they are real what could they be? Are these ghostly phenomena, or merely illusions and tricks of light and the atmosphere? How is it that they have managed to so firmly entrench themselves into the lore of so many places? The answers to questions such as these elude us, but Japan certainly seems to have a rich history and traditions of spooky ghost lights that will likely be talked about and retold far into the future.

Newly Discovered Dinosaur Species Was A Cousin Of The Tyrannosaurus Rex