Mysterious Horse Mutilations Continue Across France and Other Countries

The vast majority of unexplained animal mutilation cases in the U.S. are cattle, with many centered along an infamous corridor across Middle America that coincides with many UFO incidents. Cattle mutilations are also the norm in other countries where animal mutilations occur, unless the area is known for Chupacabras or other alleged bloodsucking creatures. That’s why a new rash of attacks is so unusual – they’re centered in France and the target animals are horses.

“French police are investigating a series of mysterious “barbaric” horse murders involving the mutilation of the bodies of animals that have stunned rural France. The last one in Cortambert, a village in the Saône-et-Loire region, occurred on Friday night. The one-year-old filly’s right ear was cut off, one of her eyes was gouged out, her neck was cut, and her genitals were cut. But the police are struggling to identify the perpetrators or find any motivation behind the cruel killings, and probe for possible satanic links.”

Fr24news.com and other French media sites are using words like barbaric, torture and unprecedented to describe a recent dramatic increase in strange horse killings that appear at first glance to be the work or a cult. The latest was a horse belonging to Jean-Michel and Virginie Martinot, owners of a riding school. The fact that the right wing was cut off has brought this to the attention of the French National Gendarmerie (police force) because the large number of killings since February 2020 (at least 10) have all had that in common. The incidents include a racehorse that the owner believes was run until it had a heart attack before it was killed. Others showed signs of being electrocuted with a portable generator, hit on the head with a large stone or held with a nose twist. All had one ear cut off and many were said to be “sociable” animals with no fear of humans.

“Hello, The ever more abundant news of violent attacks of all kinds of equines for about 2 years, is at the origin of the creation of this group. Here, the goal is to rescind at the National, all the attacks to which our horses, donkeys and other equines can be victims. This is to make it possible to give the alert in all the regions, to follow the evolution and perhaps also to help the investigations in progress by collecting information which could allow cross-checking between the various cases.”

A Facebook page has been set up for people to register killings or suspicious activities in order to help the national police solve the cases. The killings include donkeys and ponies but no other forms of livestock, and have spread from northern France (Moselle, Yvelines, Aisne, Somme, Seine-Maritime, Oise) to other areas as well as Germany and Belgium, as Franceinfo reports. 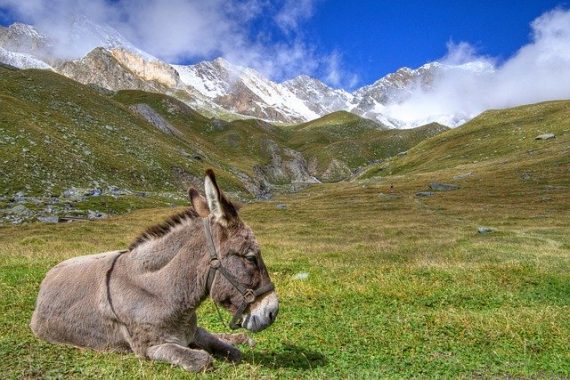 Why would anyone risk being convicted of “acts of cruelty or mistreatment of an animal” which carries a sentence of up to two years in prison and a fine of € 30,000 ($35,500 US)? The speculation centers on a Satanic or other cult, but has gravitated towards a possible Internet challenge.

One thing that sets these cases apart from large animal mutilations in the U.S. is that no reports suggest it might be extraterrestrials. Do the French not believe as strongly in UFOs and aliens as Americans do? There have certainly been plenty of UFO encounters and abduction cases in that country. One difference is that, although some of the horses have had organs other than an ear removed, none of the reports say anything about blood being drained – another hallmark of US cattle mutilations.

The cause of these mysterious French horse mutilations has yet to be determined and the stress level – particularly among horse owners – is increasing. Is it a cult? An Internet challenge? Aliens? Or just more cruelty courtesy of the year 2020?

Mysterious Little Humanoids of the World