Spend time around Brits long enough and one learns there are two things one should never speak ill of – the royal family and the Royal Navy. (There’s probably more, but that’s all we need for this story.) While the royal family has had its ups and downs and its vast amount of rumors, false narratives and historical rewrites, the Royal Navy has held steady its reputation as longtime military power that was established by Alfred the Great, King of Wessex from 871 and King of the Anglo-Saxons from 886 to 899. While the reputation has sailed through world wars, the origin story has been sunk – not by a torpedo but by a scholar.

“The idea that Alfred founded the navy is widespread – and the claim has been uncritically reproduced by such reputable authorities as the National Museum of the Royal Navy, Encyclopædia Britannica and BBC’s history webpage.”

That “idea” includes the story of the infant English navy’s first victory, 20 years after its founding, in a battle with Viking ships. Matthew Firth, a Flinders University Medieval Studies PhD candidate, and Dr. Erin Sabo, a specialist in early medieval literature and medieval maritime culture, collaborated on a new study into the English naval origin story, published in the International Journal of Nautical Archaeology and summarized in a press release. What they found in the Anglo-Saxon Chronicles, an Old English history of the Anglo-Saxons, puts the birth of the English navy years before the reign of Alfred the Great. 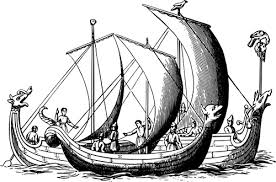 “The Anglo-Saxon Chronicles report an engagement in 851 involving an ealdorman Elchere and King Æthelstan of Kent (839–c.853), who reputedly defeated a Viking force near Sandwich – the first recorded instance of a victory for an English fleet. It implies that a tradition of defensive naval action existed from at least the reign of Alfred’s father, Æthelwulf of Wessex (839–858).”

The Anglo-Saxon Chronicles puts the birth of the English navy back on generation, and perhaps even further. That doesn’t take away from the reputation Alfred the Great has for upping the quality of the navy, does it?

“Alfred’s ship designs, as described in the records, were impractical and failed as a maritime force in its first naval battle against more experienced Viking sailors.”

Poor Alfred. It’s a good thing he had his reputation for encouraging eduction, promoting lessons in Old English rather than Latin, improving the legal system and being an all-around merciful guy to help hold on to his “the Great” moniker – the only English king to ever be called that formally (Cnut the Great was a Danish prince first). Maybe his claim to fame was putting his successors on the right path to building a naval powerhouse.

“Suggestions of vast patrol fleets maintained by his successors are both logistically and technologically impossible.”

Sigh. Eventually, someone got it right and the Royal Navy helped the British Empire rule the seas up until World War II. It’s still formidable and technologically advanced, but others have taken the place of the Vikings as flotillas they would best leave alone.

The good news is, the Royal Navy still has a better reputation than the royal family.

The Bizarre Story of Woodrow Derenberger and the Alien Indrid Cold