Oldest Ever Evidence of One Giant Sea Monster Eating Another

Researchers in China found the oldest evidence of megapredation which is when one giant animal devours another. Approximately 240 million years ago, one gigantic sea monster ate another and then died shortly after with large chunks of its last meal still present in its stomach.

The slightly larger of the two sea creatures was an ichthyosaur called Guizhouichthyosaurus (a dolphin-like marine reptile) and it feasted on a thalattosaur named Xinpusaurus xingyiensis (lizard-like marine reptile). It’s still uncertain whether the ichthyosaur attacked and ate the thalattosaur or if it feasted on its already-dead remains. Nevertheless, it was probably the last time it ate anything. In an email to Live Science, Ryosuke Motani, who is a paleobiologist at the University of California, Davis, said, “It is most likely that the thalattosaur was its last meal, given that the prey had poorly been digested when the predator died.”

The 16-foot-long ichthyosaur fossil was unearthed in 2010 when researchers were digging at a quarry located in the Falang Formation in the province of Guizhou, China. When the researchers analyzed the remains, they found that its last meal was still bulging out of its stomach. 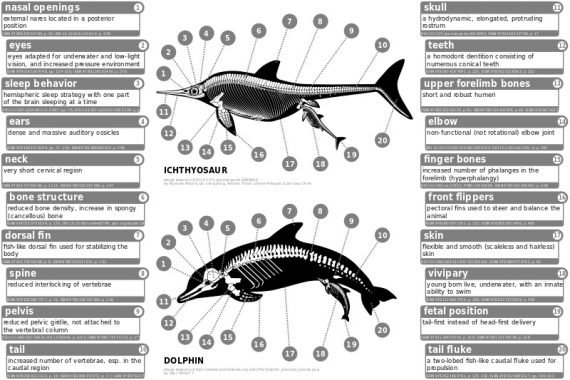 “Finding any animal other than fish or squid in an ichthyosaur's stomach contents is incredibly rare (in fact, finding fish/squid in an ichthyosaur stomach is also quite rare); only a handful of other different types of animal have been found inside an ichthyosaur's stomach, as food,” noted Dean Lomax, who is a paleontologist and visiting scientist at the University of Manchester in England but wasn’t involved with the study. He went on to say, “The discovery of a fairly large (4.8 m) ichthyosaur with a comparatively very large (4 m) thalattosaur dinner is highly unusual.”

Based on the remnants in the ichthyosaur’s stomach, it is believed that it took four huge bites from the thalattosaur’s body. The thalattosaur’s head and tail were not eaten as well as a tail which was believed to have come from the same creature that was found approximately 80 feet away. “If this is correct, then it might suggest that the predator had ‘bitten off more than it could chew,’ so to speak, in that it was a much larger meal than it had anticipated, and which could have led to its downfall,” Lomax explained.

This was a very surprising discovery as ichthyosaurs weren’t known to be apex predators. Motani went into further details, stating, “This predator did not have a typical dentition of the top predator — its teeth look like they are good for grasping squids.” “So, it was a surprise to find such large prey” in its stomach. This suggests that other giant reptiles that had teeth similar to the Guizhouichthyosaurus may have been megapredators.

So, did the predator die from overeating and did it have too much indigestion? That brings a whole new perspective to the saying, “biting off more than you can chew”. I know that I’ll think twice before eating that second piece of pie.

The researchers’ study was published in the journal iScience and can be read in full here.