Pollution and “Prophecy”: Are We Making Our Own Monsters?

In 1979, a movie was released titled Prophecy. Here's some background on the concept of the movie: "Prophecy is a 1979 American science fiction-horror film directed by John Frankenheimer and written by David Seltzer. It stars Robert Foxworth, Talia Shire and Armand Assante. Set in the Androscoggin or Ossipee River, the film follows an environmental agent and his wife filing a report on a paper mill in the river, not knowing that the paper mill's waste made a grizzly bear mutate, having the bear turn rampant in the wilderness." So much for the world of on-screen horror-fiction. But, what about the real world? Could something like Prophecy really happen? More significantly: has it already happened? It just might have. Let's take a look at the available data. I'll begin with the matter of lake monsters. Richard Freeman is a former zoo-keeper and explorer who has an interesting theory. On the matter of the Loch Ness Monster, Richard says:

"As with the Nessies I think the best bet are giant sterile eels. The common eels swims out to the Sargasso Sea to breed then die. The baby eels follow scent trails back to their ancestral fresh waters homes and the cycle begins again. Sometimes, however a mutation occurs and the eel is sterile. These stay in fresh water and keep on growing. Known as eunuch eels no one knows how old they get or how big. One theory suggests that these rare, naturally occurring, mutations may now be on the increase due to pollution. PCBs and Beta Blocker chemicals have long been implicated in causing sterility in fish. Could they be causing more eunuch eels in the deep lakes of Scotland? For now, we just don’t know."

Science Direct state: "Environmental pollution is one of the most serious problems facing humanity and other life forms on our planet today. Environmental pollution is defined as 'the contamination of the physical and biological components of the earth/atmosphere system to such an extent that normal environmental processes are adversely affected.' Pollutants can be naturally occurring substances or energies, but they are considered contaminants when in excess of natural levels. Any use of natural resources at a rate higher than nature’s capacity to restore itself can result in pollution of air, water, and land."

Ken Gerhard is a well-respected cryptozoologist who has addressed one particular issue. He says: "If you remember, back in 1995 there were an incredibly large number of deformed frogs that were found in a pond in southwest Minnesota. It made big, national news. It was kind of looked at as a sign of the times: there was so much pollution that man’s impact on the environment was causing these really bizarre frog mutations, where they would have extra limbs, missing limbs, weird eyes, and things like that. So, it has occurred to me over the past couple of years that, perhaps, we’re looking at something very similar here in Texas. It is likely that one or more combinations of chemicals, biological, and physical factors are responsible for causing the malformations."

The U.S. government’s Department of the Interior, U.S. Geological Survey, was worried. Very worried. The USGS said: "Malformed frogs first became the topic of national news in August 1995 when students at a middle school in southern Minnesota discovered one-half of all the frogs they caught in a nearby pond were malformed. Since then, malformed frogs have been reported throughout Minnesota and elsewhere in the United States and Canada. Malformations included missing limbs, missing digits, extra limbs, partial limbs, skin webbing, malformed jaws, and missing or extra eyes." Interestingly, in the past few years stories have surfaced of grossly oversized frogs seen in the lakes of Minnesota. A connection? Very likely. 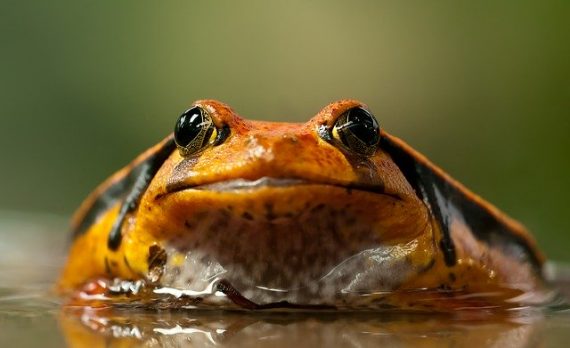 The USGS added: “Pesticides are known to cause malformation or death of frogs when present in sufficient concentrations. Studies in Canada show a relation between the percentage of malformed frogs and pesticide use. Methoprene, an insecticide widely used to control mosquitoes, also has been suspected as having caused malformations. Endocrine disruptors also are being studied to determine if they are responsible for some of the frog malformations in Minnesota. Endocrine disruptors are natural and human-made chemicals that interfere with or mimic natural hormones that control development, growth, and behavior of organisms. The number of endocrine disruptors is unknown; only during the last decade has screening of chemicals begun to evaluate endocrine disrupting activity."

The USGS's conclusion: "It is likely that one or more combinations of chemicals, biological, and physical factors are responsible for causing the malformations in Minnesota frogs. Chemical combinations may be mixtures of natural and human-made organic chemicals, each of which is harmless on its own but toxic when combined. The number of possible combinations of chemicals, biological, and physical factors is enormous, which may explain why finding the causes for frog malformations has been a difficult task."

Now, we need to return to Ken Gerhard, who has pursued lake-monsters, werewolves, Bigfoot and the Chupacabra. As for the latter beast, Ken has spent many a year pursuing what have become known as the "Texas Chupacabras." They are hairless canids that look like huge rats, but which are actually coyotes. The lack of hair is not due to down-to-earth mange, however. Rather, it’s clear that these animals are developing in hairless states. There are other anomalies, too: the creatures have strange "pouches" on their back limbs. They have huge overbites. On occasion they will run on their hind legs, in a strange, awkward bouncing fashion. They hunt in the day and do not appear to be intimidated or frightened by the presence of people. This brings us to how and why regular coyotes are quickly turning into something else. Ken has an answer:

"Many of these Texas chupacabras have been reported in areas in and around coal-burning power-plants. Coal-burning power-plants release massive amounts of toxins, including something called sulfur-dioxide, which – in laboratory tests – has been proven to be a mutagen. This is a toxin that can get into an animal’s blood make-up and actually cause their cells to mutate. Maybe, as a result of the pollution, the immune-systems of these animals have been weakened to the point where, when they do contract the mange mites, their resulting symptoms are much more extreme than anything we've encountered before. This may be why they become completely hairless, so fast, and why they look so sickly. It might also explain the physical changes, like the forelimb lengths, the overbites, and the pouches."

That the state of Texas is home to around twenty coal-burning plants, alone, is notable. As for sulfur-dioxide (also known as SO2), in 2005, the National Center for Biotechnology Information noted that when, in lab tests, mice were exposed to sulfur-dioxide, the outcome was catastrophic: "The results indicate that inhalation exposure to SO2 damages the DNA of multiple organs in addition to the lung, and suggests that this damage could result in mutation, cancer, and other diseases related to DNA damage."

Maybe, we really are making our own monsters.

Ontario Property Haunted By a Poltergeist Is Now For Sale