Athens, Ohio, is a beautiful city in southeastern Ohio known best as the home of Ohio University (OU). It also has a rich Native American heritage from Ohio’s mound-building cultures and a geography of heavily wooded hills. Those last two things might contribute to Athens’ place as a Bigfoot hotspot … and so might the college, with its pranking fraternities. That’s not the case for the latest sighting – classes haven’t started yet and attendance may be reduced due to the pandemic. That makes this sighting by members of the Athens Sheriff’s department a little more interesting.

“Deputies received a report of suspicious activity at a state park. No ODNR officers were available at the time of the call. Deputies met with the complainant whom advised they had observed a person across the lake shining a red light in their direction. A short time later they observed a bi-pedal creature around 3 to 4 feet tall walking near them and looking their direction, they were uncertain as to what it was but did not believe it to be a person. Deputies patrolled the area but did not observe any suspicious activity or creatures at that time.” 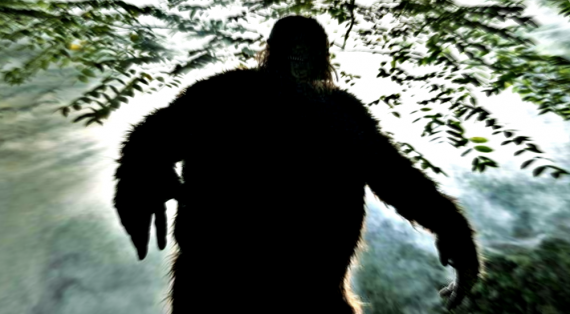 That report by the Athens County Sheriff’s Office appeared on its Facebook police blotter on August 18 and was picked up quickly by local media. The Ohio Department of Natural Resources (ODNR) was called because the alleged sighting was in a state park – most likely Strouds Run State Park, which is located primarily in Athens County and includes Dow Lake. That park is less than 100 miles southwest of Salt Fork State Park, Ohio’s center of Bigfoot activity and Bigfoot research, and a creature can easily travel between them via wooded areas.

“Two men took a drone out to Salt Fork State Park. It’s a park located in Guernsey County, Ohio, that is east of Columbus. While shooting video at the park, the two men claim to see a tall creature covered in hair, walking on two feet and making strange noises. The production quality of the video is pretty well done, and the men describe their journey through the park.”

That’s a sample of the many Bigfoot reports from Salt Fork State Park – this one occurred in February 2020. While Athens doesn’t have hearly as many sightings, it does have a resident researcher – Dr. Scott Moody, Professor Emeritus in the Biology Department at OU. In 2002, Moody was a forensic biologist and investigated a Bigfoot report from the nearby Wayne National Forest of a 7-foot tall white Bigfoot that allegedly left a toe print and some hair. Moody determined that the toe print was a channel from rain runoff and the hair from a whitetail deer. In 2013, red hair samples he analyzed turned out to be human or non-ape. He gives numerous presentations where he admits that what he’s seen are either cases of mistaken identity, hoaxes or black bears – common in Ohio. Despite that, Athens County was the setting for "Kampout," a fictional Bigfoot movie.

What about the recent sighting of what the media called a ‘juvenile’ Bigfoot in Athens? At 4 feet tall and in a park, that’s probably a bipedal black bear. However, the red light could signal a hoax or a lost hiker. Prints or fur or spoor samples would help, but it doesn’t appear the Sheriff’s office looked that closely … and who can blame them in these times? Perhaps some Ohio Bigfoot researchers will check it out.

In the meantime, OU students should avoid the woods, wear masks and hit the books/notebooks, not the trails.