Sara Hawys Roberts' Withdrawn Traces is, without a doubt, one of the best, and most absorbing, books I've read in a very long time. It tells the story of a man born Richard James Edwards in Pontypool, South Wales in 1967. In the 1990s Richard became famous as both Richey James and Richey Manic. He was one quarter of one of Wales' most successful rock bands, The Manic Street Preachers. In 1995, things changed. That's when - depending on your own perspective - Richey took his life or carefully staged a suicide and made a new life for himself. Either way, he vanished. Since then, numerous words have been written about Richey. Withdrawn Traces sets the record straight. And, not only that, the book has the support of Richey's sister, Rachel. The band has been in existence since 1986, now as a trio. As you might guess, over a period of more than thirty years their guitar-driven music has gone through a few changes and styles. For me, their biggest and best moment was the 1992 album, Generation Terrorists. Imagine a combination of The Sex Pistols, The Clash, maybe a bit of Hanoi Rocks, and the Michael Monroe band, and you'll get the picture.

Withdrawn Traces is not the average rock biography. This is something quite different and beautifully written. We get to learn of the early years of Richey's family and his life - something that is supported by numerous photographs. Having read the book twice, I can say that it seems Richey was at his happiest as a youngster - playing with his friends and with his faithful dog, Snoopy. Indeed, those aforementioned photographs - of Richey frozen in time and mainly in black-and-white - show a happy kid. Then, of course, teenage years come along. Becoming a teenager is a difficult time for just about everyone. It seems that for Richey it was a particularly fraught period. This is made clear by reading some of the the extracts from Richey's journals that - in almost voluminous fashion - show how life became such a hard time for him in his teenage years. University followed on - as did the creation of the Manic Street Preachers. Fame, glory, fans, gigs, and fun times on the road followed. It didn't stay like that, however. It seemed like things, for Richey, were almost destined to crash and burn.

It's important to note that although Richey was the second guitarist in the band, he was also the band's primary lyricist (and an absolutely voracious reader, too). A great deal can be learned from Richey's words, some of which show signs of his distinct torment and turmoil. There's also the fact that, as the book shows, Richey had a hard time cementing relationships with girls, was anorexic, fell into dangerous states of self-harm and depression, and had problems with drugs and alcohol. As time progresses, we see Richey's fragile state of mind get worse and worse - to the point that he enters two facilities: Whitchurch Hospital (in 1994) and, later, The Priory. Things get worse for Richey when his beloved Snoopy, by then aging and in pain, has to be put to sleep. I doubt anyone could read this section of the book and not end up with a tear or several in their eyes. As we learn, Richey was crushed; there's no other way to describe it. It was yet another trauma-filled time for Richey. All of this brings us to the mystery of what happened to Richey.

As Brent Swancer wrote: "On February 1, 1995, Edwards was getting ready to travel to the United States as part of a tour, along with Manic Street Preachers vocalist James Dean Bradfield. However, he would never get on the plane, and Edwards vanished from his hotel room, with his abandoned car later found on February 14 next to the Severn Bridge, which connects England and Wales. In the meantime, his hotel room was found to contain his suitcase, most of his belongings, and strangely a box wrapped up and decorated like a birthday present, which was inexplicably filled with books, videos, and a copy of the play Equus, all tied up and adorned with a note addressed to a 'Jo' that simply said 'I love you.'" 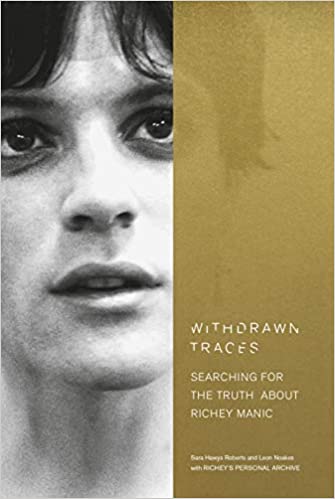 In the twenty-five years that have now passed since Richey went missing, it has been suggested that he took his life by jumping off the Severn Bridge, which, admittedly, does have a history of suicides attached to it. Of course, the most obvious scenario is that Richey parked his car next to the bridge and chose to take his life. Maybe, though, that's not the case. One of Richey's favorite television shows was a 1970s BBC production, The Fall and Rise of Reginald Perrin. It's the story of a man who fakes his death and starts a new life. Journalist Rosie Dunn said of Richey and the BBC show: "Richey kept mentioning it to me, like he wanted it to hit home somehow. But I didn't really think about it until after he'd disappeared." Then, there's the matter of Richey's Uncle Shane, who, in the early 1960s, moved to the United States (Texas) and who "didn't visit home for five years." As Richey's sister, Rachel, says, "...it fascinated [Richey] that his uncle could go off the grid like that..." Moving on, there are the alleged sightings of Richey after his assumed death; they are addressed in the book. It must be said this aspect of the controversy sounds somewhat like the claims of people who have supposedly seen Elvis Presley long after his death. Or, how the Doors' singer, Jim Morrison, may have faked his death. In the case of Richey, however, the stories are particularly intriguing and certainly not sensationalized. Conspiracy theories become part of the story, too, as do matters relative to mind-control and government agencies; but, I'll leave that part of the book for you to digest for yourselves. Now, a few final words...

I strongly suspect that Richey really is still alive. As Withdrawn Traces shows, there are some genuinely odd aspects to his disappearance. The "staged" scenario is highly plausible, taking into consideration all that has been uncovered and suggested. To be balanced, however, there is the following: we know for sure that Richey loved his family and they loved him. In light of that, it seems strange that Richey never let his parents and sister know that, yes, he had made a new life for him, that he was okay, but that he wanted to be left alone. Not only did such a thing not happen, but Richey's parents - Graham and Sherry - both died never knowing what had happened to their son. Would Richey have put them through such anguish and frustration (the same goes for Richey's sister, Rachel, too)? Who can say what goes through the mind of someone contemplating suicide? What we do know for sure, is that Richey wanted to become a rock-star. He achieved that goal and lasting fame, too. And, he did so on his very own terms. Beyond that? Maybe, one day, time will tell.

Withdrawn Traces: a book not to be missed.