If enough DNA could be found to bring back the thylacine – the extinct-but-maybe-not Tasmanian tiger – would the creature be a bloodthirsty marsupial wolf with a huge made-for-legs-and-livestock mouth? That’s how many picture the creature – also called the Tasmanian wolf – despite the rare videos and eyewitness accounts depicting the meat-eaters as somewhat smaller. Could that be because this was a weakened last-of-its-kind survivor? A new study found that the average thylacine was even smaller than once thought and – despite its names and reputation – much more docile than believed. Would fans be as enthusiastic about bringing back the Tasmanian tiger if they knew it was more like a Tasmanian tabby? 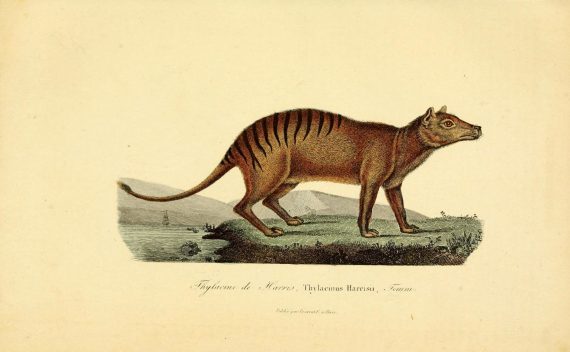 “Until its extinction, the thylacine was the largest extant carnivorous marsupial, but little data exist regarding its body mass, with an average of 29.5 kg the most commonly used estimate. According to the costs of carnivory model, this estimate predicts that thylacines would have focused on prey subequal to or larger than themselves”

Douglass S. Rovinsky, a Ph.D. student in the Department of Anatomy and Developmental Biology at Australia’s Monash University and lead author of a new study in Proceedings of the Royal Society B on thylacine size, tells ABC AU about his first impression of a thylacine skull: “[But when] I saw my first Tassie tiger and picked up the skeleton of the skull, and was like, 'that's not a 30 kilo animal, this is a lot smaller.” Rovinsky says he thought about this for a few years until he figured out a way to quantitatively test his theory."

Rovinsky, an American transplant, borrowed a 3D scanner and scanned skeletons and preserved animals in the Museums Victoria and the Tasmanian Museum and Art Gallery in Hobart. He digitally weighed the taxidermied thylacines to determine their mass and merged it with the other data he had collected and ended up with models for 93 different Tasmanian tigers. Rovinsky then ran the simulation and analyzed the results. 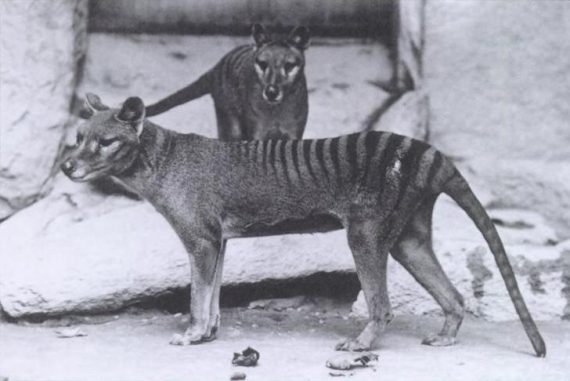 Those results -- 16.7 kg (37 pounds), 19.7 kg (43.5 pounds) and 13.7 kg (30 pounds) – are a little more than half the 29.5 kg accepted estimate. The simulation also estimated an average height of about 60 cm (23 inches), putting the thylacine in a size range comparable to the coyote or the Australian kelpie – a sheepdog. While this doesn’t change the ‘cost of carnivory’ formula which means the thylacine killed and ate prey about its size of larger, it reduces the size of those animals as well.

So, instead of kangaroos and sheep, the thylacine probably ate small wild mammals. That ironically kills the justification for their mass killings by farmers and hunters leading to their eventual extinction. It also knocks their alleged feared ferocity down a few notches from tiger or wolf to sheepdog.

Still want them brought back?

Strange Portals and Reality Rifts in the Wilderness