The Bizarre Life of Mike, the Headless Wonder Chicken

September 10, 1945 started like any other day at the farm of Lloyd Olsen, in Fruita, Colorado. One this day he went about his chores as usual along with his wife, and one of the orders of business for the day was to go out and kill chickens, which they would then sell at the meat market in town. They went through about 50 birds that day, with Lloyd methodically decapitating them and his wife cleaning up and putting the carcasses away. One of the unlucky birds on this day was a 5-and-a-half-month old chicken called “Mike,” which was targeted for dinner that night, and when the hatchet hit the head came off and the body flopped and shuddered like the rest, only this time something was different. When Lloyd finished killing the chickens, he looked around and saw that Mike was walking around as usual, not flapping and spasming in his death throes, but rather walking about like normal and even trying to peck at seeds on the ground, which was hard to do since he was minus a head. And so would begin the strange odyssey of the miraculous Mike, the headless chicken who lived in a decapitated state for over a year with no ill effects.

At first Lloyd could just stare as the headless bird wandered around, waiting for it to finally drop dead, but it never did. In all of his years, the Olsens had never seen such a thing, and it was both fascinating and eerily unsettling at the same time. As the hours went by and Mike continued to act as if he still had a head, even attempting to preen his feathers and issuing a gurgling crowing, Lloyd put the strange bird into a box and set him aside. It was thought that the bird would pass during the night, but when the morning came Mike was still walking around pecking at the ground, leading Lloyd to later say in astonishment, “The damn thing was still alive.” It was beyond reason that this should be, but Lloyd was starting to feel sorry for the headless bird, and decided to try and care for it by feeding it with a mixture of milk and water via an eyedropper directly into its gaping throat, as well as some forcing down worms and grains, and he would also clear mucus from the bird’s throat with a syringe. 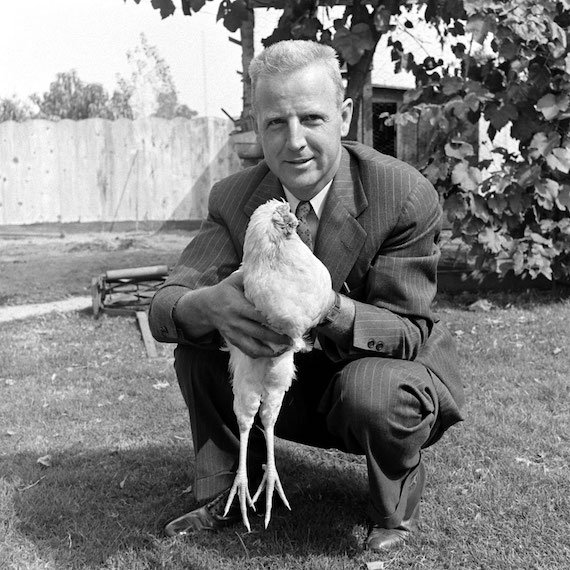 The days went on and Mike still would not die, in fact, he seemed to thrive, just as healthy as he ever had been in life, and this got farmer Olsen to thinking. It was obviously an oddity and an anomaly, and he started to get the idea that he could maybe spin Mike’s bizarre condition into some sort of profit. He started by riding around town in his wagon with Mike in the back, betting people beer that he had a live headless chicken and amazing all who saw it, as well as scoring a good stash of booze. Word began to get out about this amazing chicken, and reporters came to see Mike and photograph him. It wasn’t long at all before a sideshow promoter heard about the amazing headless Mike, and approached the Olsens about taking the bird on a sideshow tour along with other oddities, curiosities, and freaks. Since they were poor farmers and the promoter was offering cash, the Olsens agreed, and went on a whirlwind tour all over the country, during which time “Mike the Headless Wonder Chicken” amazed throngs of gawking curiosity seekers and was photographed by such famed publications as Time and Life magazines.

Through all of this the Olsens were making a fairly good chunk of change from their headless chicken, who months later was still going strong. In fact, it would not be until a full 18 months after losing his head that Mike would finally die, and it wasn’t even really because of his lack of a head. On this evening, the Olsens were at a hotel in Phoenix, Arizona on a leg of their sideshow tour when they were woken by a loud gurgling noise. It turned out to be Mike, suffocating on either the mucus that regularly had to be cleaned out or a kernel of corn. The problem was, at the time they had misplaced the syringe and eyedropper they used to clear his throat, and as a result the poor bird died by choking. At the time of death, his overall physical condition was described as excellent, with Lloyd Olsen saying he was a “robust chicken - a fine specimen of a chicken except for not having a head.” Despite the tragic death, even in death Mike was popular, as there were scientists who wanted to figure out how a chicken had lived 18 months without a head. So why is that, indeed? How could this be? Surprisingly, none of this was a hoax, and there is actually a sound scientific explanation. 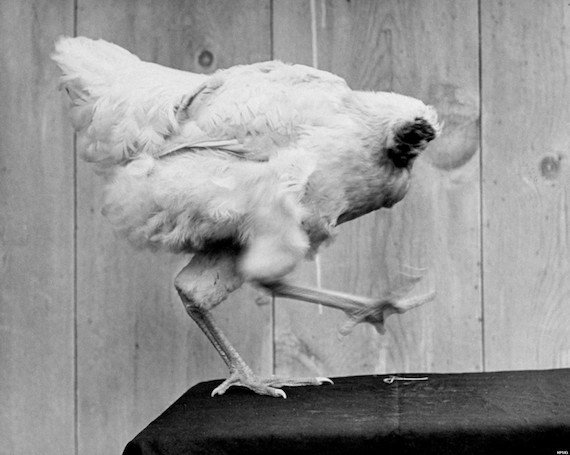 It is probably no surprise to many readers that a beheaded chicken will usually flail and even run about for a time, but this does not mean it is still alive. It is rather a firing of neurons that jolts the motor system for a short time, and this will typically last no longer than 10 or 15 minutes before the carcass ceases movement as the residual oxygen in the spinal column is depleted. In the case of Mike, the key to his improbable survival was the way the hatchet had taken off his head. While the head had been removed, Olsen had managed to miss the jugular vein and also hit at just such an angle that a large portion of the brain stem had remained intact and attached, with the added bonus that a blood clot had formed that prevented further blood loss through other means. This all meant that not only was Mike spared from bleeding to death, but there was also enough of the brain stem left that it could still carry out basic homeostatic functions such as motor control, breathing, heart rate, and digestion, as well as most reflex actions. Due to this, although the head was gone, there was enough of the stem left to allow the bird to live more or less as usual, and it is very likely Mike would have gone on to live a full, healthy life if he hadn’t choked to death in that hotel room.

It was an incredibly bizarre coincidence that the hatchet had managed to hit in just such a way as to allow this to happen, and indeed many attempts by copycats trying to create their own Mike failed. It was a one in a million fluke, and to this day Mike the Headless Chicken hold a place in the Guinness Book of World Records. He was truly one of a kind. In Fruita, Colorado, they still remember Mike, and there is even an annual "Mike the Headless Chicken Day" in the third weekend of every May, which is a festival that features a wide range of chicken related games and events. The story of Mike the Headless Chicken is certainly an odd one, and shows us how weird the natural world can be. That a chicken without its head could live so long and have such a fruitful life is truly weird, and it will likely remain a curious historical oddity that will cause some head scratching for some time.