The Haunted Penal Colony of Tasmania

Some places seem destined to become haunted locales. Whether it is from their brutal history or from being steeped in suffering and anguish, they call out to and invite such tales. One such place must certainly be an isolated penal colony on a windswept, forlorn peninsula of the Australian island of Tasmania, and which has had odd stories of the paranormal gravitate towards it for decades.

The former penal colony known as Port Arthur has a very unique and violent history that makes it perfect for tales of hauntings. Located on the Tasman Peninsula, in Tasmania, Australia, approximately 60 miles southeast of the state capital, Hobart, it was named after George Arthur, the lieutenant governor of Van Diemen's Land, and first started as a timber station in 1830. From 1853 it was converted into a penal colony and it attracted the worst of the worst among British criminals, quickly earning a reputation as a hell on earth where only the hardest, unrepentant dregs of society were sent to languish. It was also known for having some of the tightest security there was at the time, and also for its harsh corporal punishments doled out, such as whippings, sensory deprivation, starvation, and other forms of torture. The shark-infested waters around it were forbidden to merchant vessels and whalers, in order to keep prisoners from escaping upon boats, the land around it peppered with traps, guard posts and marauding attack dogs, the men were kept completely barred from any visitors, and it was widely publicized as an inescapable prison. Here murder among inmates was rampant, as was suicide, with others simply dying from the sheer dire harshness, and before long there was a whole island devoted to holding all of the bodies, which earned the sinister nickname of “The Isle of the Dead.” In short, Port Arthur was a harsh and brutal place far from civilization, full of death and suffering, and it was not a place where anyone wanted to be sent. 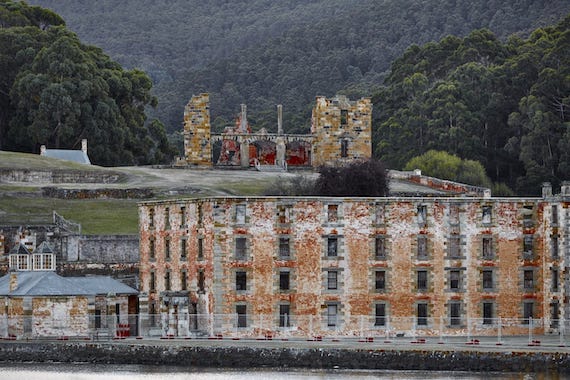 The prison would eventually close in 1877 and go on to become a tourist attraction, of all things, due to the mostly scenic location on the peninsula. Even as the prison buildings rotted, the area became a haven for tourists from all around Australia, with the country trying to change the image of Port Arthur into a bright and cheery one, even changing the name of the town to Carnarvon in order to further distance it from its bloody past. Yet, it appears that the bloody history of this place was not done yet, as on April 26, 1996 the Port Arthur historic site became the scene of one of the worst massacres in recent memory. On that day, 28-year-old Martin Bryant took along some high capacity semiautomatic shotguns and rifles and proceeded to slaughter 35 people and wound 23 more before being captured alive and sentenced to 35 life sentences plus 1,035 years without parole in the psychiatric wing of Risdon Prison in Hobart, Tasmania.

It is this history pervaded with death, coupled with the crumbling, decrepit ruins of the old penal colony, that make this a perfect place for ghost stories. Since even the days of the penal colony there have been stories of seeing shadowy figures lurking along the high cliffs of the area or roaming about the mass, unmarked graves of the Isle of the Dead. There are also other areas that are said to be particularly haunted. One of these is the area called “The Parsonage,” which was a home for the resident clergy during the prison days. One of these was a tall, intimidating name by the name of Reverend George Eastman, known for his ultra-conservative “fire and brimstone” sermons to the inmates. By all accounts both prison staff and prisoners alike were utterly terrified of him, so when he died in 1870 it seems only natural that he should linger to keep on freaking people out. He is said to roam the parsonage wreathed in a fetid, rotting odor, and the whole building is plagued by ghost lights and tales of tourists being pushed and prodded by unseen hands. One very terrifying story of the Parsonage is told by an investigator named Leonie Vandeven, who visited with her 7-year-old son. As she was there, her normally happy and inquisitive son seems to have been overcome by some sort of supernatural force, and she explains of the bizarre incident:

“Not yet of the age at which I thought it necessary to provide a detailed history of Port Arthur, as far as he was aware we were just looking at a bunch of old buildings. At first he was inquisitive, happy to skip beside us as we explored the old Church, Government Cottage and gardens, but his mood changed dramatically when he refused to cross the threshold of The Parsonage, reputably one of the most haunted buildings in Australia.

Over the next 30 minutes my son’s emotions intensified as he became teary and extremely difficult, clenching his fists by his side as he moved unwillingly from site to site, refusing to enter any structures. He was unable to articulate what his problem was other than saying, “I’m just angry” over and over again. Thinking this was a rare and, by his usual standards, a particularly odd tantrum, we persisted with our visit. We could not, however, ignore him when he began pacing in a circle near the chilling Separate Prison, intermittently growling under his breath. The prison had been built for the physical, mental and sensory isolation of unruly convicts, truly hell on earth for those unlucky enough to wind up there.

By this time my son was attracting the attention of others with his distressed growling and pacing. I bundled him in my arms imploring him to tell me what was wrong but his response was forced and stilted. “I. Am... Trying. To. Keep...The. MAD. In.” That was enough for us to finish our visit and head for the exit at the Port Arthur Visitor Centre, our little boy seemingly wracked with grief, holding back tears and growling all the way. It rocked us to the core when we also discovered the area our son was anxiously pacing around was the very spot of a brutal solitary confinement cell once used to house the worst of the worst tortured souls in convict days. Spirits of broken men whose legacies remain in the physical ruins and the unsettling energy cloaking the otherwise exquisite setting that is Port Arthur ... We feel you.” 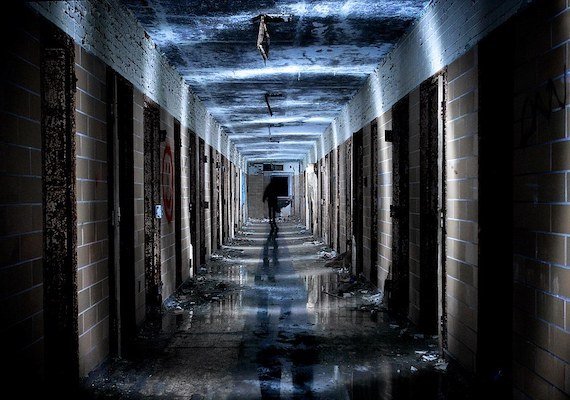 Another particularly haunted area of the complex is the old solitary confinement cells, which are said to utterly ooze a sense of dread and despair. People who have entered the cells of this area have reported hearing voices, being punched or kicked when no one else is there, and even sustaining physical injuries from these phantom attacks. Indeed, all over the Port Arthur complex there are various reports of the wandering spirits of dead inmates, disembodied footsteps or voices, and flickering lights, slamming doors, moving objects, and other phenomena are so common here that it is one of the most popular destinations for paranormal investigators in all of Australia. Among the many apparitions reported from here are prisoners, an old woman sitting in a rocking chair, and oddly numerous spirits of creepy children. To cater to this interest there have been many ghost tours established at the site, and one of these tour guides by the name of Suzanne has said of one frightening incident:

A standout incident was on a tour a few years back. It was going well until about halfway through when I heard a bit of a commotion toward the back of the group. A couple were deep in conversation and the husband appeared agitated and upset. He told me that as he and his wife were walking past a house he saw a little girl dressed in old-fashioned clothing. She was skipping towards him, and she went straight through his body and continued on! I had never experienced someone who was so visibly upset … he seemed to have actually aged. He then started to cry and hyperventilate and refused to stay.

It seems that there is something about this particular location that tethers such forces to it. Could it be the bloody, tumultuous history embedded with it? Is it the suffering infusing the very air of this place that produces these phenomena? Or is this just the result of an undeniably creepy place working its magic upon the imagination? Perhaps the only way to find out is to pay a visit yourself and see if there is anything to it all.

“The Land of the Young” Where “Aging Was None-Existent”