The USS Lexington was an aircraft carrier for the United States Navy during World War II. It is nicknamed “The Blue Ghost” because the Tokyo Rose radio broadcasters were continuously saying that the ship had been destroyed even though it hadn’t which caused them to call it a ghost ship as it kept returning to battle.

The ship was decommissioned in 1991 and is currently a very popular tourist attraction in Corpus Christi, Texas. And it’s apparently a paranormally active ship as several former crew members as well as tourists claimed to have experienced unexplained activity onboard the vessel. In fact, it’s considered to be one of the most haunted places in all of America.

One popular story is a spirit with piercing blue eyes called Charlie who is always dressed in full Navy uniform and is often seen in Engine Room #2. Several tourists have commented on the fantastic tour guide in the engine room who gives lectures on the how the turbines work but there weren’t any guides on the ship. He apparently likes to turn off lights and shut doors too. Another helpful spirit dressed in full uniform has helped tourists who were lost to find their way back to the deck.

One person even claimed to have seen several spirits of soldiers running across the deck during a thunderstorm. Another interesting story was when several painters were working on the ship, they left for a quick break and when they returned, everything was painted for them.

But not all of the spirits are nice and helpful as one woman claimed to have seen a ghost with scars on its face and no eyes that charged towards her while she was on the bridge. Other ghostly apparitions include a Chief Petty Officer wearing his uniform and staring at visitors with a scowl on his face. A Japanese pilot who caused several deaths as a result of an attack has also been seen on the ship.

There have been several shadow figures reportedly seen roaming around the deck as well as other locations onboard the ship. Rene Moraida, who is the education coordinator, stated that security officers heard the sounds of people running through the hangar bay in the middle of the night around 3 a.m. “The damage control officer said he didn't see anything on the security cameras and went to see what the noise was coming from," he explained, “That was when he witnessed shadow figures running in chaos ... the officer never came back.”

Other paranormal activity include the smell of food while walking through the kitchen; hearing strange noises and unexplained screaming while in the area where some soldiers had passed away; and hearing the sounds of distant gunfire. Unexplained footprints have appeared on the freshly mopped deck in addition to some people hearing someone walking up behind them but when they turned around, nobody was there. Others have felt sick when visiting the Switch Room. Now that’s one haunted ship! 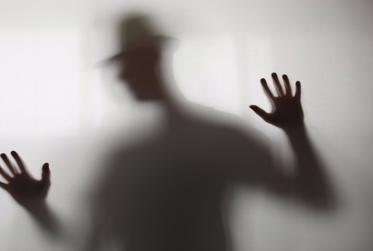