The Mysterious Atlantis of Japan

Lying off the southern tip of Japan’s Ryukyu archipelago, which includes Okinawa Island, is a small 11.5 square mile speck of land called Yonaguni Island. It is the westernmost inhabited island in Japan, lying just 75 miles off the coast of Taiwan, and its azure waters, rich biodiversity, and large populations of hammerhead sharks that gather in great numbers off the coast every year have made this place a haven for daring scuba divers from around the world. Indeed, it was the sharks that brought here a diver in the 1980s who would make a spectacular discovery in that inviting blue water, for down there in the depths he discovered a strange set of ancient ruins that have gone on to be discussed and debated to this day.

In 1986, a diving instructor by the name of Kihachiro Aratake, who was also the director of Yonaguni-Cho Tourism Association, was at Yonagumi looking to photograph and study the many hammerhead sharks that congregate here every winter. While scouting out a good spot from which to observe the sharks, he came across something very unusual. There on the bottom was what at first looked like an enormous cliff face, only here there were obvious geometrical terraces, nearly perfectly flat horizontal surfaces with sharp edges, walls, platforms, columns, vertical stone blocks, a road, and even a star-shaped platform. One of the structures was a massive, rectangular formation measuring 500 feet long, 130 feet wide and 90 feet tall, with closely placed pillars which rise nearly to the surface, as well as a ledge that circles the whole thing. For all appearances it seemed to be some sort of vast, manmade structure, evidently crafted out of the sand and mud stones of the area and in some cases seemingly directly merged with the bottom itself, but what was it doing out there under the water in the first place? What did this all mean? 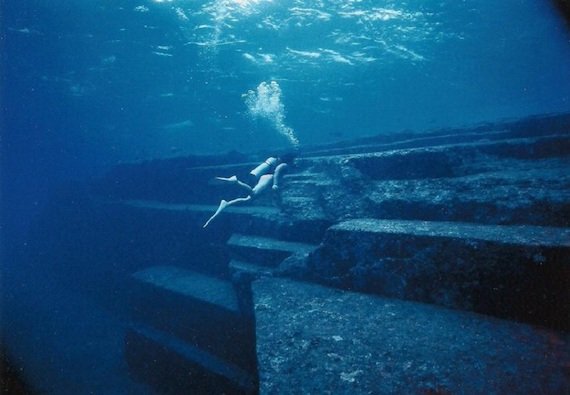 It was not long at all before the word got out on this mysterious place, and one of the first scientists to arrive to seriously study it was marine seismologist Masaaki Kimura, who came to what is now called the “Yonaguni Monument” in 1990 with his team from the University of the Ryūkyūs, and he would spend the next two decades studying them. According to Kimura, the structures are most definitely and clearly manmade, likely carved thousands of years ago at a time when the site sat above water. He has claimed to have found a mysterious script carved into some of the stones, as well as quarry marks, various monuments, rudimentary sculptures, a triumphal arch, five temples, and even a pyramid and a stadium within the complex, in addition to various pottery, stone tools and fireplaces scattered throughout. Kimura has said of this place:

I think it's very difficult to explain away their origin as being purely natural, because of the vast amount of evidence of man's influence on the structures. The characters and animal monuments in the water, which I have been able to partially recover in my laboratory, suggest the culture comes from the Asian continent. One example I have described as an underwater sphinx resembles a Chinese or ancient Okinawan king. The largest structure looks like a complicated, monolithic, stepped pyramid that rises from a depth of 25 meters [82 feet].

He has said in the past that he believes the structures to be possibly remnants of the legendary ancient lost Pacific continent of Mu, or perhaps the remains of the lost 1st century Japanese city of Yamagai. Adding to Kimura’s assertion that the ruins are artificial in origin are the sheer number of perfect 90-degree corners and sharp, straight edges to be found, as well as the sheer number of these structures in such a small area. Not everyone is so convinced that this is evidence of a lost civilization, though, and there are others who believe this is nothing more than anomalous looking natural formations caused by earthquakes, natural erosion from the strong currents of the area, and fracturing. One Robert Schoch, a professor of science and mathematics at Boston University, has personally seen the site up close, and has said of it:

I'm not convinced that any of the major features or structures are manmade steps or terraces, but that they're all natural. It's basic geology and classic stratigraphy for sandstones, which tend to break along planes and give you these very straight edges, particularly in an area with lots of faults and tectonic activity. 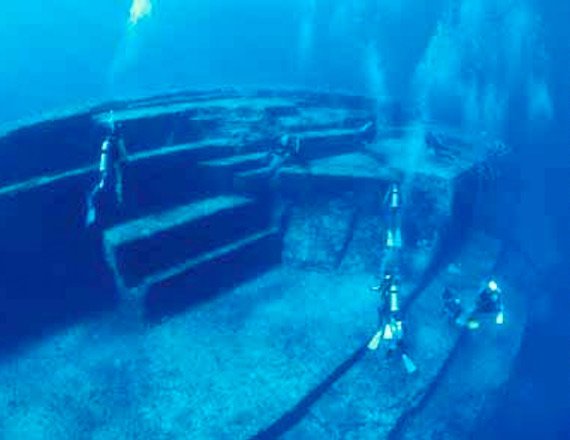 In the end there has been no conclusive answer to just what the mysterious Yonagumi Monument actually is, but it has certainly become a popular diving destination for curiosity seekers. Interestingly, the ruins are not designated as important cultural artifacts and are not under any sort of protection. They might as well be just rocks lying on the bottom for all the government seems to care, which seems to be strange considering more research could definitely be done here. Whatever their origins, largely the formations have remained just forgotten curiosities and a cool dive site. What is the meaning and purpose of this place, if any? Was this crafted by some lost civilization for inscrutable reasons or is it just a neat geological formation? The mystery remains.

“A Huge Snake or Dragon” – Profiling Wisconsin’s Very Own Nessie