The Mysterious Death of the Unknown Hiker From Nowhere

In April of 2017, a man was making his way out along the Appalachian Trail from New York, on his way to walk the entire 2,200 mile distance and then take the Florida Trail down through to Florida’s Key West. It was a daunting adventure to say the least. He was known along the trail by his trail names “Denim” and “Mostly Harmless,” which came from his alleged favorite book The Hitchhiker's Guide to the Galaxy. To those who met him along the way he was known as a friendly, jovial man with a ready smile, but he mostly kept to himself, and often declined offers by people living along the way to give him shelter or let them use their homes to take a shower or do laundry. However, he was known to socialize on occasion, was always approachable, and was not above making use of hiker’s hostels along the way. For the most part he just seemed to be another of the many hikers who take to the Appalachian Trail every year, but he would soon turn into a strange unsolved mystery that has not been solved to this day, and indeed we do not even know who he really is.

On July 23, 2018, two hikers by the names of Nichalaus Horton and Logan Buehl were passing through a place called Noble’s Camp, in Big Cypress National Preserve, located in Collier County, Florida, when they came to what seemed to be an abandoned tent and took a tentative look inside. What they found would shake them to the core, as there was the dead body of another hiker, with one witness saying of the discovery of the corpse, “His body was kind of twisted. His eyes were wide open and he was looking right at me.” The body seemed to be of a man from between the ages of 35 and 50, with a beard and appearing very thin and gaunt. In the tent with him was hiking gear, a backpack, $3,640 dollars in cash, and two notebooks full of an eclectic collection of writings ranging from diary entries to computer coding notes, to recipes for trail mix and protein bars, but there was no phone, no identification, no credit card, nothing to give a hint as to who he actually was.

The hikers quickly notified authorities, who arrived to find that the man weighed only 83 pounds and seemed to have starved to death, despite the fact that there were homes and outposts along the way and he had been carrying more than enough money to buy something to eat. Scouring the campsite turned up no information as to who he actually was, and when the man’s fingerprints were run through the system they turned up no hits whatsoever. Looking through missing person reports in the region also turned up nothing, and soon the authorities were puzzled as to who this mysterious hiker was. Even a DNA sample sent to the University of North Texas and compared to national databases turned up nothing. It was not until a composite sketch was made and did the rounds that someone came forward to identify him as the hiker known along the trail as “Mostly Harmless.” One of the first people to identify him was a woman living along the Florida Trail by the name of Kelly Fairbanks, who said she had spent some time with him and had this to say:

He told me he started in New York and he was headed to Key West and I thought he must be doing okay because he made it this far. It is pretty unusual for a thru hiker not to carry a cellphone. He's probably the only one I've ever met personally that didn't have a cellphone. He just seemed like a super nice person, he had such kind eyes. To go through the trail blind was naive, I thought that was a bad decision. We just wished him happy trails and sent him on his way. He died doing something he loved.

Fairbanks expressed that she had been worried about him since he had no phone or GPS device, and did not seem like a particularly experienced hiker, and he also declined her offer to use her home to freshen up and get supplies, but since he had made it that far all the way from New York she didn’t think too much of it at the time. When more hikers came forward with their accounts of meeting “Mostly Harmless” along the trail it was considered that this was indeed the identity of the dead hiker, but it still didn’t solve the mystery of who he actually was. No family members or anyone who knew him personally or could give a real identification came forward, and it was all very frustrating considering that he wasn’t exactly a phantom since they had numerous very clear pictures of him on his trip. He was found to have checked into the Top of Georgia Hostel & Hiking Center under the name “Ben Bilemy,” but this proved to be a bogus alias and led nowhere. People who had met him also claimed that he had never told them where he was actually from, and he also did not have a particular regional accent that they could recall. In short, he could have been from anywhere. There were few other clues other than one hiker who claimed he had been told that Mostly Harmless worked in the tech industry, but this wasn’t much to go on. Police were stumped. Who was this guy? 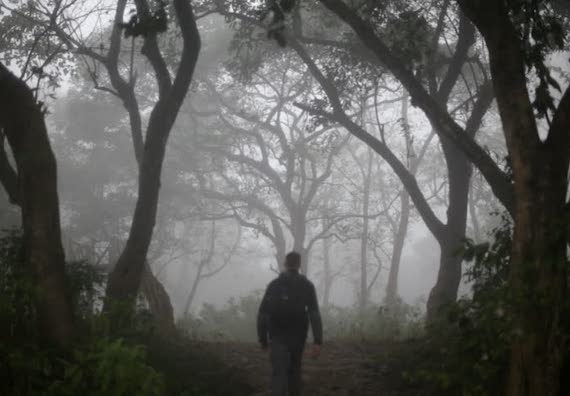 In the meantime, a medical examination of the body itself turned up more oddities, as it could not be determined exactly how he had died, and it was labeled as “undetermined.” He had no terminal illnesses and was in perfect health except for his dangerously low weight, which in itself was odd because witnesses who had met him and pictures of him taken along the trail not long before his death showed him looking noticeably more robust and weighing more. It all just serves to make the whole case murkier still, and we are left with this guy who was not shy about having his photo taken, who met many people along the trail, who just suddenly died inexplicably in his tent of reasons that are poorly understood. What happened here and who was Mostly Harmless?

The best that anyone could do at the time was to speculate that he was probably from the New York area, where he started his journey, and that he worked in the tech industry doing some sort of coding work, but that is about it. Even with his face splashed all over social media no one who knew him personally in his real life under his real name has come forward to claim him or shed any light on who he is. As to how he died, it is a mystery that he would be found in such a state when he obviously had the resources to feed himself. The Appalachian and Florida Trails are long but well-traveled and not exactly completely remote, with plenty of hostels and homes along the way that are happy to provide provisions and help. Mostly Harmless had over 3,000 dollars in cash on him, so how is it that he could starve out there in his own tent? No one knows, and the identity and last days of the man they called "Mostly Harmless" are strange mysteries we may never solve. Who is this man who went out along that trail on his last walk, only to die alone and unclaimed in that tent? What happened to him? It remains an enigma.