Throughout history there have been numerous reports of strange things falling from the sky. Frogs, jellies, black goop, fish, and even worms have come down from time to time, among others, and it is a topic frequently discussed in the world of the paranormal. On some occasions these mysterious rains are truly bizarre in the things they disgorge from the heavens, and one of these must certainly be the time an area of Kentucky experienced an intense rain of pieces of meat.

March 3, 1876 started like any other day in the rural area of Bath County, Kentucky, in the United States. People got up and went about their business, and in the tiny town of Rankin a woman known only as Mrs. Crouch was out on her porch making a batch of soap and just minding her own business at around 11 AM when something plopped down nearby. Then something else came down with a wet thud, then another with a splat. The startled woman approached what looked to be a blob on the ground, even as others continued to smack down from above, slapping the ground with increased frequency, and on closer inspection she could see that these were in fact pieces of meat, measuring on average about 2 by 2 inches, but with some that were larger. For the next several minutes the meat pelted down until the yard was littered with enough meat to, according to her, “fill a horse wagon.” 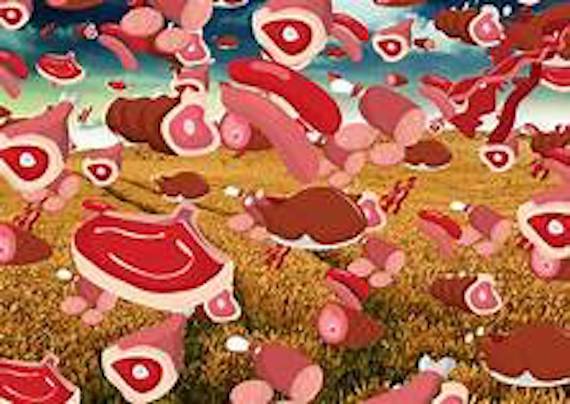 It was all very perplexing, since it was described as a clear and sunny day with not a cloud in the sky, and when Mrs. Crouch looked up she could see no place from which all of that meat could have possibly dropped from. It soon became apparent that the meat had fallen all over the area, covering an expanse measuring 100 by 50 yards wide, all over roofs, the road, and even stuck in fences. The following day, Mrs. Crouch and her husband had a Mr. Harrison Gill come out to investigate the scene, and although the meat was now dried up and slightly spoiled, he surmised that it was beef, and that it displayed signs that it had been dropped from a considerable height. Other curiosity seekers visited the Crouch farm, and two men actually tasted the meat to come to the conclusion that it was either mutton or venison, although yet another taster said it was probably bear meat. Yet another person who tasted it, a local butcher, claimed it “tasted neither like flesh, fish, or fowl.” Why was everyone eating it? Who knows? But no one could come to a conclusion as to what it tasted like.

The strange story was soon being covered in publications such as The New York Times and Scientific American and in addition to the media circus, it also attracted some scientific interest. A sample of the meat was sent to the Newark Scientific Association, where it was oddly determined to have come from either a horse or a human infant. Wait, what? It would soon become clear that no one could really agree on what the meat actually was, but it was clear that the disparate pieces had come from various parts of the body, including the lungs, muscles, and cartilage. One researcher by the name of Leopold Brandeis didn’t even think it was meat at all, but rather a type of cyanobacteria called Nostoc, which he surmised had expanded into a clear or flesh-colored jelly-like mass resembling meat when it came into contact with rain. The problem is, there was no rain reported for the area for the time, and in fact it was reiterated again and again that it had been a clear, sunny day.

Whatever the “meat” was, a perhaps more pressing question was where in the world it had come from. The sky had been clear, there was no rain reported, so where did it come from? It was clear that it had fallen some distance, and that the Crouches likely did not put it all there themselves, so what was the origin of this mystery meat shower? One idea was that some sort of whirlwind had picked up the meat from somewhere else and then deposited it there. There was also the notion that it was actually up in the upper atmosphere and had been knocked down by a meteor, a bizarre theory explained by a New York Times writer by the name of William Livingston Alden thusly:

According to the present theory of astronomers, an enormous belt of meteoric stones constantly revolves around the sun, and when the earth comes in contact with this belt she is soundly pelted. Similarly, we may suppose that there revolves about the sun a belt of venison, mutton, and other meats, divided into small fragments, which are precipitated upon the earth whenever the latter crosses their path.

Of course, now we know that this would be impossible, but at the time it was as good a guess as any. Yet another theory that made the rounds was that the meat was actually vomited up by a flock of passing vultures. The idea here is that vultures have the disconcerting habit of vomiting up meat as a way to lighten their load when trying to make an escape or when threatened, and that if one vulture did this, others might follow suit to create the rain. The problem here is that not only would it have taken a huge number of vultures to produce the sheer amount of meat that was found, but Mrs. Crouch insisted that there was nothing up in the sky when the meat was actually falling. Whirlwinds, UFOs, vomiting vultures, what was going on here? Whatever the case may be, the "Great Kentucky Meat Shower" has never been fully been explained to everyone's liking, and it is a weird little mystery.