Throughout history there have been various mysterious texts, scrolls, and manuscripts claiming to have secret or even forbidden knowledge that lies beyond our ability to comprehend it. These manuscripts come creeping up upon us through the mists of time, wreathed in mysteries that we may never understand, and they have served to propel the imagination since time unremembered. One such text must surely be an ancient Indian manuscript, which purportedly holds the secrets to amazing, fantastical flying machines well before their time,  and the veracity of which has been debated right up into the present.

In 1952, a G.R. Josyer, founder of the "International Academy of Sanskrit Research," came forward to unveil a previously unknown text at an event exhibition of rare Sanskrit manuscripts. The text was called the Vaimānika Śāstra, meaning “The Science of Aeronautics,” supposedly dictated between the years of 1918 to 1923 to a  G. Venkatachala Sharma by the mystic Pandit Subbaraya Shastry, who said the information had come to him in flashes and dreams, and considered himself the earthly conduit of the information from the real author, the ancient sage Maharshi Bharadwaja, itself claimed to be thousands of years old and put out there freely for “the benefit of all of mankind.” The mysterious text itself was devoted to the vimānas, which were the fantastical flying chariots, thrones, carts, palaces, and other vehicles of the gods mentioned in ancient Sanskrit epics, but which according to this manuscript were actually advanced flying machines far predating any known airplanes. A news publication would say of the unveiling of this mysterious manuscript:

Mr. G. R. Josyer, Director of the International Academy of Sanskrit Research in Mysore, in the course of an interview recently, showed some very ancient manuscripts which the Academy had collected. He claimed that the manuscripts were several thousands of years old, compiled by ancient rishis, Bharadwaja, Narada and others, dealing, not with the mysticism of ancient Hindu philosophy of Atman or Brahman, but with more mundane things vital for the existence of man and progress of nations both in times of peace and war. One manuscript dealt with Aeronautics, construction of various types of aircraft for civil aviation and for warfare. Mr. Josyer showed some types of designs and drawing of a helicopter-type cargo-loading plane, specially meant for carrying combustibles and ammunition, passenger aircraft carrying 400 to 500 persons, double and treble-decked aircraft. Each of these types had been fully described. 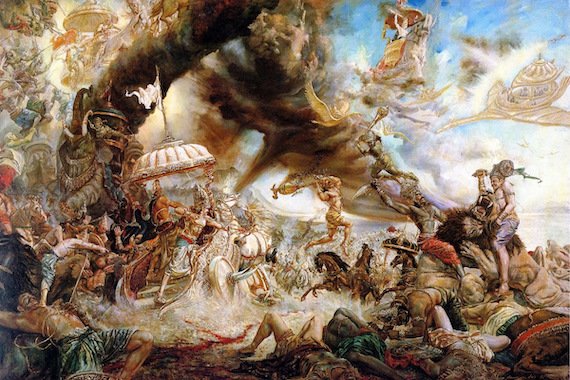 The text styles itself as sort of a treatise on ancient Indian flying machines, giving exhaustive descriptions, diagrams, and illustrations of aerodynamics, propulsive devices, materials, and metallurgy, as well as the definition of an airplane, what a pilot is and their duties, aerial routes, food, clothing, metals, metal production, mirrors and their uses in wars, varieties of machinery, and others. The text goes into great depth on a variety of different flying vehicles. For instance, there is the Shakuna Vimana, which is shaped like a bird, measures 80 by 56 feet in dimension, and is crafted from a super-light, advanced alloy called raja loha. There is the Sundara Vimana, a giant cylindrical cone that utilizes steam and vaporized oil for energy production and is equipped with five gas engines, electrical tube wheels, and lifting fans. The Rukma Vimana is a massive, 5-tiered construct that has a 100 or 1000-foot base dimension, a 20-foot height, and an 80-foot cone height and operates on solar power. Another is the Tripura Vimana, which can move in air, on land, or through water, and which is fashioned of a fire-resistant alloy.

Every single one of these outlandish contraptions is explained in great technical detail, with elaborate illustrations of their inner workings and designs, meticulous recipes for their fuels and alloys, and it all really boggles the mind that any of this could come from thousands of years ago, as claimed. Yet the Vaimānika Śāstra became very popular immediately upon release, being translated into Hindi in 1959 and then English in 1973. Of course, considering that this information and the bizarre designs were claimed to be thousands of years old, its public reveal immediately drew the attention of UFOlogists and ancient astronaut theorists, who studied the Vaimānika Śāstra with great interest and fascination. However, the work has also drawn its share of criticism. One of the main problems with all of this is that, although the information is claimed to be from mystic ancient sources and a great sage, it was more or less released in modern times by the self-professed medium Pandit Subbaraya Shastry, who then left it to his son, Shri Venkatrama Shastry, after which it found its way into the collection of Josyer. However, Shastry has been claimed to have been a humble, honest man who never intended for his work to get out into the public eye, and he never took personal credit for any of it. It doesn’t seem as if is was an intentional hoax perpetrated by Shastry, although it might have been by his son. However, this is probably the least of the worries the veracity of this text has.

Even more damning are the findings made by scientists who actually went and checked out the viability of the designs contained within the text. For instance, researchers from the Indian Institute of Science in Bangalore checked it out in 1974, and it did not take them very long at all to come to the conclusion that, in reality, most of the designs in the Vaimānika Śāstra simply would never actually be able to practically fly. The team found that not only are the aeronautics and geometries of the craft all wrong, but that the proposed methods of propulsion are also not viable. They even went as far as to say that the designs offended the laws of physics, that the author of the manuscript had a poor understanding of aeronautics, and stated, “If the craft is taken to mean what the drawing and the text say, it can be stated that the craft is a decided impossibility.” The study would not mince words at all when it says;

Any reader by now would have concluded the obvious – that the planes described above are the best poor concoctions, rather than expressions of something real. None of the planes has properties or capabilities of being flown; the geometries are unimaginably horrendous from the point of view of flying; and the principles of propulsion make them resist rather than assist flying. The text and the drawings do not correlate with each other even thematically. The drawings definitely point to a knowledge of modern machinery. This can be explained on the basis of the fact that Shri Ellappa who made the drawings was in a local engineering college and was thus familiar with names and details of some machinery. Of course the text retains a structure in language and content from which its 'recent nature' cannot be asserted. We must hasten to point out that this does not imply an oriental nature of the text at all. All that may be said is that thematically the drawings ought to be ruled out of discussion. And the text, as it stands, is incomplete and ambiguous by itself and incorrect at many places.

Ouch. There was also the researcher J. B. Hare of the Internet Sacred Text Archive, who also is blunt and harsh when he says of the origin of the manuscript and its contents:

You just have to buy into the assumption that 'channeling' works. ... there is no exposition of the theory of aviation (let alone antigravity). In plain terms, the VS. never directly explains how Vimanas get up in the air. The text is top-heavy with long lists of often bizarre ingredients used to construct various subsystems. ... There is nothing here which Jules Verne couldn't have dreamed up, no mention of exotic elements or advanced construction techniques. The 1923 technical illustration based on the text ... are absurdly un-aerodynamic. They look like brutalist wedding cakes, with minarets, huge ornithopter wings and dinky propellers. In other words, they look like typical early 20th century fantasy flying machines with an Indian twist.

The proponents for the veracity of the texts will point out that the Vaimānika Śāstra is incomplete, and that these missing parts might fill in the blanks, as well as that these would be highly advanced machines beyond our understanding. We are left with these supposed ancient texts, given to us by a seer and medium, unleashed upon the world to try and explain these mysterious machines of the gods but coming up lacking by modern scientific standards. Whatever one makes of them, they add to the rich history of texts purporting to have secret ancient knowledge, which will always have a particular allure and effect on the imagination, whether they are real or not.