The Mysterious Mogollon Monster of Arizona

Cutting a swath through the northern half of the U.S. state of Arizona is the remote escarpment that stretches around 200 miles from Yavapai County to the border of New Mexico, as well as forming the southern edge of Arizona’s Colorado Plateau, and is called the Mogollon Rim. It is a place of breathtaking vistas of plateaus and badlands, like something out of a Wild West movie, with a certain rustic charm all its own. Along its eerie and beautiful landscape of steep slopes, canyons and gullies are vast swaths of Ponderosa pine forests, which have served as an integral habitat for a great many unique species of birds, plants, animals, and insects, but according to reports going back into the 1800s a far more mysterious beast also calls this place its home. Out here along the rim and its vicinity have long reports of a massive, hulking bipedal beast stalking the wilds here, which has come to be known as the Mogollon Monster.

The creature is in many respects reminiscent of a Bigfoot in the typical appearance. Standing between 7 and 8 feet tall, covered with long, matted hair usually described as having a reddish-brown coloration, and having a face somewhat between a man and an ape. It is also recognizable for the incredibly potent odor that orbits it, described as smelling like “dead fish, a skunk with bad body odor, decaying peat moss and the musk of a snapping turtle.” It differs somewhat from typical Bigfoot encounters in that the creature of the Mogollon Rim is often characterized as being extremely aggressive and even violent, known to terrorize hikers and campers, throw stones, charge trespassers, and it is often blamed for mysteriously mauled and mutilated animals found out in the wild. It is also well-known for its shrill, bloodcurdling screams and shrieks, and most reports say it is mostly certainly a predatory creature.

While the Mogollon Rim region and surrounding areas including around Prescott, Williams, Alpine, and Clifton Arizona, have had reports of large and vicious man-like beasts going back to the days of the first settlers of the area, the creature really made a name for itself in 1903, when a harrowing report of an encounter with the monster made the news. The creature was supposedly seen near the Grand Canyon, by a witness named I.W. Stevens, whose story made the Williams News and The Arizona Republic. According to Stevens, he came across the creature as it was hunched over a dead cougar, presumably eating the carcass. He would describe it:

I saw … a man with long white hair and a matted beard that reached his knees, face seared and burned brown by the sun, with fiery green eyes. He wore no clothing and upon his talon-like fingers were claws at least two inches long. A coat of gray hair nearly covered his body, with here and there a patch of dirty skin showing.

Terrified at the sight of this otherworldly beast from a nightmare crouched over a dead cougar seeming to drink its blood, Stevens remained absolutely still and silent as he tried to hide behind a nearby boulder. However, whatever it was managed to detect him, whipping its head up, standing to its full height of 7 feet tall, and issuing an ear-piercing wail, while also waving about what appeared to be an intimidating club. This was enough for Stevens, and he ran off, luckily without the monstrous thing in pursuit. Stevens got to his boat, left behind at the river’s edge, and looked back to the creature, this time gathering courage from the perceived safety of his boat to shout at it. According to Stevens, it then “flourished his club again and screamed the wildest, most unearthly screech I ever heard” and went back to eating the cougar. Stevens would call it “The Wild Man of the Rocks” and speculate that it had been a person who had gone feral and insane out in the wilds. 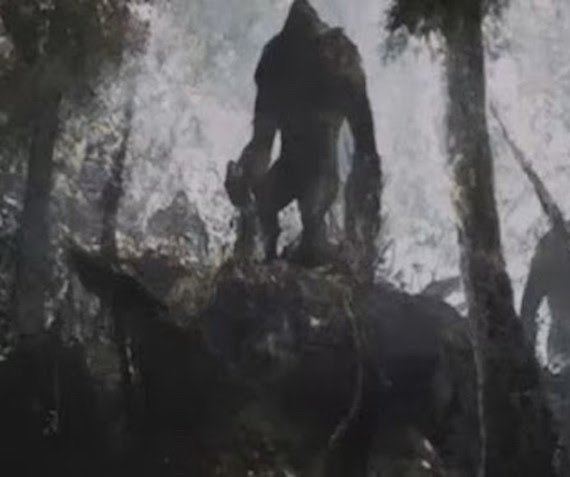 A perhaps even more high-profile case allegedly occurred in the mid-1940s, when cryptozoologist Don Davis was on a childhood Boy Scout camping trip to Tonto Creek, near Payson, Arizona. As they were sleeping in their tents, something out in the dark shrieked to wake them with a start, after which they could hear rustling and shuffling as if someone were rummaging through the campsite and looking through their gear. At the same time, the entire area was hit by a pungent odor that permeated the air and made some of them gag. When David looked outside of the tent, he says he was confronted with the sight of a creature the likes of which he had never seen before or since. He explains:

The creature was huge. Its eyes were deep set and hard to see, but they seemed expressionless. His face seemed pretty much devoid of hair, but there seemed to be hair along the sides of his face. His chest, shoulders, and arms were massive, especially the upper arms; easily upwards of 16 inches in diameter, perhaps much, much more. I could see he was pretty hairy, but didn’t observe really how thick the body hair was. The face/head was very square; square sides and squared up chin, like a box.

This horrifying site caused Davis to cower in his tent, hoping that it would come no closer, and after picking through the campsite a bit more it ambled off into the dark wilderness to never return. Sporadic sightings of the monster have been made ever since, notably a spate of sightings that plagued the White Mountain Apache Nation reservation in 2006. At the time there were numerous panicked residents of the Fort Apache Indian Reservation reporting a very tall, black creature covered in hair, with inhumanly long arms, and walking in enormous strides. At the time, tribal police were inundated with calls from frightened residents claiming to have seen the monster, and reservation police lieutenant Ray Burnette would say:

A couple of times they've seen this creature looking through the windows. They're scared when they call. The calls we're getting from people — they weren't hallucinating, they weren't drunks, they weren't people that we know can make hoax calls. They're from real citizens of the Fort Apache Indian Reservation. 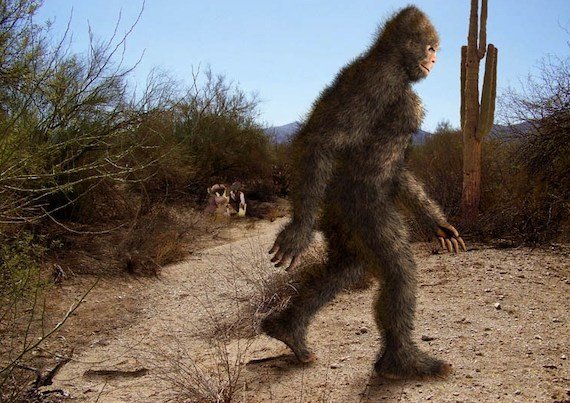 Another recent sighting was given to the site Cryptozoology News by a 28-year-old woman by the name of Y. Estevez, who says she encountered it while hiking along the Canyon Point trail of the Mogollon Rim. As she made her way along the trail, she noticed a massive brute that looked like “a troll” crouched down drinking from a pool of water. She would state:

It was on its knees, drinking water, when I found it. Drinking, making noises like a pig, so at first sight the animal looked like a pig to me. I figured it was just a pig…kind of hairy though, which seemed a little odd for a hog. As soon as I made a little noise, the animal turned its head and looked directly at me. Now that’s when I freaked out. It was staring at me. Just like what you do with cougars. They always tell you to make yourself look bigger and to get very loud, and in theory, the animal will leave. So I start making noise and moving my arms up and down, the creature gets off its four legs and stands on its hind legs. It had long hair, grey and bluish, and I swear it looked like one of those trolls from a fairy tale. Ugly stuff. The face was human looking, no hair on it, but full of bumps. The eyes were kind of a brown-red. Thick big nose, small lips. No expression on its face at all. It then took off running like a person. From now on, I will make sure I don’t hike alone. At least not around here.

What is this strange creature? A popular idea among cryptozoologists is that is is some regional form or subspecies of the Sasquatch, with its appearance and behaviors indicative of the forbidding habitat it dwells within. It could also be misidentifications of other wildlife or even pure made-up hoaxes and fabrications. Yet, there seem to be enough reports from sincere and reliable witnesses that it is difficult to just throw it all away. We are left to wonder whether there is some large, bipedal ape-like beast roaming the wilds of Arizona, and the answer continues to evade us, leaving us to speculation and wonder.