In the autumn of the year of 1944, Slovak military commander Antonín Horák was performing military operations somewhere in the Tatra mountains during the Slovak National uprising, which was a concerted guerrilla military movement organized by the Slovak resistance movement insurrectionists in an attempt to resist occupying German troops and drive them away. This was a dangerous time, when the Wehrmacht of Nazi Germany were patrolling the wilds, and indeed Horák’s unit was ambushed by one such unit as they were hiding in a trench to escape detection. The skirmish did not end well for the Slovaks, with nearly all of his men being slaughtered, and he himself was shot and left for dead. This would pave the way for a strange discovery made out in the wilds of Slovakia, which has captured the imagination and stirred speculation ever since.

When he awoke, Horák was lying in the trench in a pool of mud and his own blood, surrounded by the corpses of his fallen comrades. He at first thought that he was the only one who had survived, and it was only through the help of two local villagers that he did not join them in death. Two villagers carried him away on a makeshift stretcher, and it would become clear that two of the other Slovak soldiers had also survived, although all of them were wounded and immobile. The villagers told them that they were being brought to a secluded, secret cave out in the wilds where they would be able to hide away and recover. However, once they reached this cave, Horák knew that it wasn’t just a typical cave. He was immediately suspicious when one of the villagers told him not to wander too deep into the recesses of this place, as it was considered to be possibly haunted and there were many steep drops within. It seemed as if the villagers were hiding something, and Horák made a mental note to explore it when he had the chance.

He had his chance when in the morning the chief villager, named Slávek, said some prayers while facing the murk within and then informed the soldiers that he would be back later in the afternoon. When he was gone, Horák peered into the gloom and felt curiosity getting the better of him. He was weak and unable to walk so well, but he was able to get up and hobble about, using a light to pierce through the darkness as he felt his way along. It soon became clear that the walls of the cave were not the typical rough rock that one would expect, but rather polished to a mirror sheen, as if formed of glass, and of a bluish black coloration. He then decided to go even deeper yet, finding a small vent in the floor after penetrating into the cave for around 90 minutes. Taking this vent deposited him within a huge chamber and grotto with white stalactites covered in a strange, enamel-like substance, and sitting within this cavern was a very curious sight, indeed.

There within the grotto was a sort of huge, cylindrical object or shaft set within the rock, described as dark, metallic, and completely smooth like the walls of the cave, only here there could be seen strange symbols like hieroglyphics etched into the surface. He warily approached the anomalous structure, and rapping on its side with his pickaxe produced a slight echo that suggested it was hollow inside. The material it was fashioned of looked almost like a shiny onyx, but when he took a few experimental swings at it with his pickaxe he found that he was unable to leave any chip or scratch upon it. Some reports say that he even tried to fire upon it with his pistol, and even that did not scathe it. He decided to crawl back through the cave and fetch some things he felt he would need to further explore this curiosity. He did not tell his wounded fellow soldiers what he had seen, but rather since the weather was getting worse and it was apparent that the villagers would not be able to return, he told them he needed their belts and some rope to help him capture any animals he could find for food. 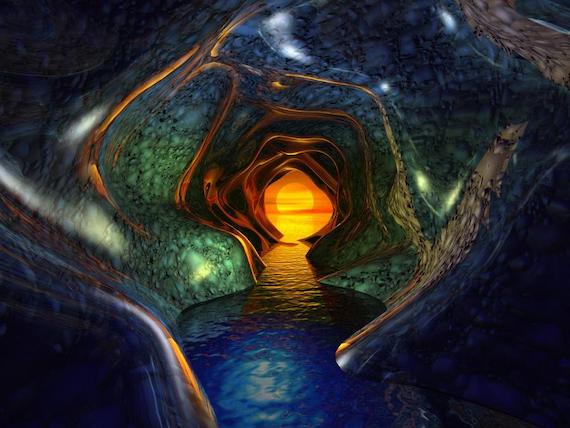 Armed with this new equipment he went back to the mysterious object several times over the next few days, and used the belts and rope to climb down within it through a large, diamond-shaped crack at its top. The interior was covered in what appeared to be clay and limestone, and the sounds in there were said to be unnaturally amplified. The whole of it was said to actually be in the shape of a crescent moon, and as he explored, he came across the remains of what seemed to be a cave bear, a long extinct species that he surmised had fallen to its death within the structure eons ago. He then tried again to shoot at the walls, but this only produced “green sparks” and smoke. There were found to be some sort of horizontal grooves in the walls of the cylindrical chamber, which seemed warm to the touch. No other entrance into the strange cave was found, and so Horák decided to make a note of its location and then conceal the vent that led to this place.

The villagers returned and on of his fellow soldiers would pass during the night, making it impossible for him to make any further excursions into that mysterious cave, but he wrote about it and made sketches in his diary. He eventually was rescued and able to make it home, but that bizarre cave and its cylinder occupied his thoughts for years. On many occasions he meant to go back and find it once again, but it was too dangerous and so it was mostly just an oddity that only he knew of. It was not until 1965 that Horák would publish an excerpt from his diary concerning the finding in in the National Speleological Society News, and from there the place he called the “Moonshaft” or also "Mooncave" began to capture the imagination of adventurers, geologists, spelunkers, and mystery seekers from all over the world.

One of the problems with going in to actually check out if any of it was true or not is that the political climate in the former Czechoslovakia was not exactly conducive to exploration expeditions, and the area was considered mostly off-limits. In the meantime, Horák, who had since emigrated from Czechoslovakia to the United States, was interviewed by numerous researchers and even Dr. J. Allen Hynek, of Project Blue Book fame. However, it would not be until by Czech explorers Ivan Mackerle and Michal Brumlík ventured into the region in 1980 that any actual follow up field work would be done on the matter. Other expeditions would trickle in, but none of them were able to locate the mysterious cave. One of the main problems is that Horák’s diary is very vague about the actual location, merely mentioning that it is in the Tatra Mountains and in the vicinity of the villages of Ždiar, Lubochňa and Plaveč, but considering the sprawling, isolated wilderness of the region that could be anywhere. To this day there are occasional claims that the cave has been found, but no proof offered, leaving us to speculate about what it could all mean.

What did Antonín Horák found out in that wilderness? Theories have included that it was a geological anomaly, ancient copper mine, an entrance to some underground world, the remnants of a lost civilization, or a crashed alien spaceship embedded within the rock, but no one knows for sure and we probably never will. The only person who knows for sure, Antonín Horák, would in later years just sort of vanish, taking whatever secrets he had with him and leaving behind only some scattered diary entries and sketches of what he claimed to have found. We are left to wonder just what it is that he found out there, and what still might be buried beneath the Slovakian wilderness. Ancient civilization, alien spaceship, or just a very strange cave? We may never know for sure.

When Strange Creatures Appear at Loch Ness, But They’re Not Nessies