The Night a UFO Crashed – or Didn’t

Without doubt, there are some UFO cases (or those cases that are assumed to be UFO-connected) that never go away - even after not just years but decades. One such event occurred on the night of January 23, 1974. The location was the Berwyn Mountains, North Wales. Without doubt, the expert on this complicated story is Andy Roberts; he’s a long-time researcher of UFOs and numerous other anomalies. As for what happened in January 1974, Andy says: "Prehistoric man lived and worshipped on the mountains leaving behind him a dramatic, ritual landscape dotted with stone circles…Folklore tells us that these mountains are haunted by many types of aerial phenomena, including the spectral Hounds of Hell: those who saw them recalled how they flew through the night sky baying as though pursued by Satan himself. To the south of the Berwyn’s at, Llanrhaedr-ym-Mochnant, the locals were plagued by a ‘flying dragon’ – intriguingly, a common name for UFOs in times gone by."

Andy continues: "It is against this backdrop of history and myth that on the evening of January 23, 1974 an event took place on the Berwyn Mountains that was to perplex locals and spawned a veritable cascade of rumors, culminating in a claim that, if true, would irrevocably change our view of history and make us revise our plans for the future of both our planet and our species. The claim was that a UFO piloted by extraterrestrials crashed, or was shot down, on the mountain known as Cadair Berwyn and that the alien crew, some still alive, were whisked off to a secret military installation in the south of England for study."

Certainly, something happened on the Berwyn Mountains at approximately 8:30 p.m. on that famous night. No-one disputes that: it’s the nature of the events that provoke most of the debate. Anne Williams, of Bro Diham, Landrillo, recalled: "I saw this bright light hanging in the sky. It had a long fiery tale which seemed to be motionless for several minutes, going dim and then very brilliant, like a dormant fire which keeps coming to life. It would have been like an electric bulb in shape, except that it seemed to have rough edges. Then fell somewhere behind the hills at the back of my bungalow and the earth shook." Police Constable Gwilym – off-duty at the time and knocking back a beer or a few in the local Dudley Arms pub - had something to say, too: "There was a great roar and a bang and the glasses shook. The sky was lit up over the mountains. The color was yellowish but other people in the valley described seeing blue lights."

Police Sergeant Gwyn Williams stated: "“The walls shook and the mirror swung away from the wall" he recalled. "My first thought was that a big lorry had hit the cinema – it was that kind of a roar and bang. Everyone ran into the street.” Around an hour-and-a-half later, what was described as a huge "luminous sphere" was seen by Ken Haughton, at a height of around 15,000 feet in the sky. He said that it seemed to fall vertically into the sea near to the town of Rhyl. A UFO wave? That’s what many thought. But, many can easily be deceived. That strange lights had been seen maneuvering in the skies, and the fact that the ground shook to a major degree, inevitably provoked fears that an aircraft – or, possibly, something exotic and unearthly - had crashed somewhere on the vast mountains on that winter’s night. It’s no surprise, then, that on the early morning of the 24th a Royal Air Force emergency rescue team – operating out of the RAF Valley base – carefully scoured the Berwyns from overhead. They came away completely blank: there was no evidence of any kind of crash having occurred. There was no debris, no fires on the mountains, and no mangled bodies, human or otherwise. The entire thing was a mystery.

A very non-mysterious theory was put forward by the authorities: what some believed to have been a crash of something from the skies was actually an earth tremor. That does make some sense: it would have been very easy to mistake the effects of a small earthquake for a large object slamming into the ground. But, what of those lights that were seen in the skies – and at just about the same time? One theory was that they were actually the lamps of men out on the hills hunting for hares. Or, that there had been a meteorite shower – which there actually was. Not everyone was buying into this wholly-down-to-earth picture, however. A letter was fired off to the staff of the Wrexham Leader newspaper by a fairly irate soul, who wrote: “Regarding your front page article ‘Mystery Tremor’ in the issue of January 25, I find the explanation given absolutely ludicrous. The tremors shook houses over a 60-mile radius, and the lights were seen clearly miles away – this was reported by the national press and radio. I know nothing about ‘Hare hunting’ but unless the hunters use aircraft searchlights and kill their prey by lobbing a small atom bomb at them, then I fail to see how anyone can accept such an explanation.” 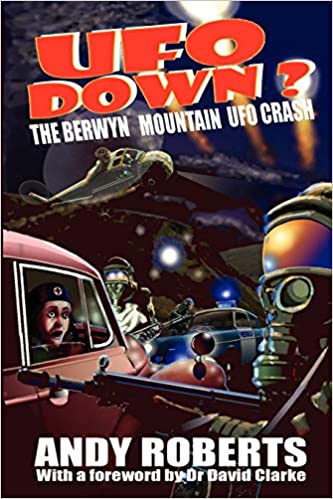 For many, it was all a huge – and almost unique – coincidence provoked by those lamps, the meteorite shower, and an earth tremor that was powerful enough to shake homes and cause windows to shatter. All in relatively close proximity to each other. And all at around the same time. Perhaps that's what happened. On the other hand, though, you can easily see why more than a few people might have chosen to use one word to describe the chaos on the mountains: "Hmmmmm." The coincidence angle is broadly the theory that Andy Roberts goes with. Indeed, Andy wrote an entire book on the subject - and from the perspective of everything being very much UFO-absent. Its title: UFO Down? The Berwyn Mountain UFO Crash. It should be read by one and all.