The Strange Case of the Great Sheep Panics of Oxfordshire

Some cases of the strange just sort of defy any clear categorization. They hover around, obviously odd, but with no real way to figure out exactly what they are supposed to be. Such cases often slip through the cracks of history to be just sort of forgotten and met with shoulder shrugs. One of these must certainly be a case in which vast numbers of sheep across a vast swath of land in England suddenly and without reason went crazy and ran amok like a zombie army of fluffy whiteness.

The setting for this rather strange little tale is the quaint countryside of the region of Oxfordshire, in southern England. Here there stretch fields as far as the eye can see, and there sometimes seem to be more sheep than human beings. In fact, sheep is what we are here to talk about, because in November of 1888 something very odd happened to the sheep over a vast area of the countryside. On the evening of November 3, at around 8 PM, thousands upon thousands of disparate sheep across an estimated area of around 200 square miles around the town of Reading and its surrounds suddenly and simultaneously went absolutely berserk. The tens of thousands of terrified animals in unison bolted in terror, overran fences, destroyed property, careened across fields, and flew about the countryside in general wild-eyed panic. 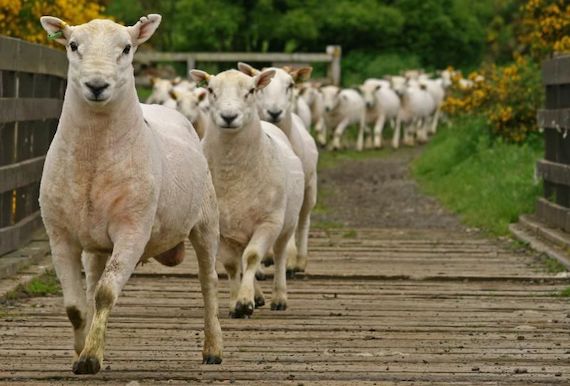 The next day it took an immense amount of effort to round up all of the animals, many of which were reported as still being in a state of profound panic and confusion. The ranchers and farmers of the area were in complete awe at this stampede of sheep, and it was all like nothing they had ever seen. Two farmers would later say of the event in a letter to Hardwicke’s Science-gossip magazine:

At a time as near eight o’clock as possible the tens of thousands of sheep folded in the large sheep-breeding districts, north, east, and west of Reading were taken with a sudden fright, jumping their hurdles, escaping from the ﬁelds, and running hither and thither; in fact, there must for some time have been a perfect stampede. Early on Sunday morning the shepherds found the animals under hedges and in the roads, panting as if they had been terror-stricken. The extent of the occurrence may be judged when we mention that every large farmer from Wallingford on the one hand, to Twyford on the other, has reported that his sheep were similarly frightened, and it is also noteworthy that with two or three exceptions the hill-country north of the Thames seems to have been principally affected. We have not heard, nor can any of the farmers give any reasonable explanation of the facts we have described. The night was intensely dark, with occasional ﬂashes of lightning, but we scarcely think the latter circumstance would account for such a wide-spread effect. We would suggest the probability of a slight earthquake being the cause, but, perhaps you or some of the readers of Science-Gossip may be able to offer a more satisfactory explanation.

The thing about the earthquake idea was that no one in the region reported feeling one, and even the lightning was later reported as having not been that bad, and nothing that hadn’t happened before without scaring the daylights out of tens of thousands of sheep to send them into a frenzy. The main idea became that either this lighting or the work pf pranksters intentionally riling up the sheep was to blame, but it is interesting to note that it seems that all of these sheep, from different flocks spread out across hundreds of miles, had all been affected at exactly the same time, which is a detail that is hard to explain. Could this have really happened from simple panic because of the dark night and the lightning? The great paranormal researcher Charles Fort did not think so, and he would write of “The Great Sheep Panic of 1888” as follows:

An idea of the great number of flocks affected is given by one correspondent who says that malicious mischief was out of the question, because a thousand men could not have frightened and released all these sheep. Someone else tries to explain that, given an alarm in one flock, it might spread to the others. But all the sheep so burst from their folds at about eight o’clock in the evening, and one supposes that many folds were far from contiguous, and one thinks of such contagion requiring considerable time to spread over 200 square miles. Something of an alarming nature and of a pronounced degree occurred somewhere near Reading, Berkshire, upon this evening. 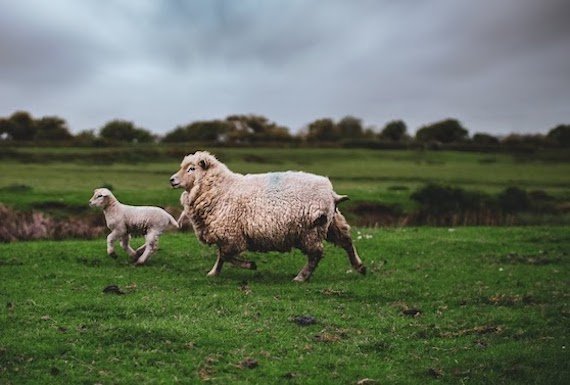 Another idea for what might have started the panic was that it had perhaps been caused by a meteorite exploding in the atmosphere, called a bolide, although if that were the case it would have made a huge noise and it seems that more humans would have reported it. Yet another idea was just that it was all down to the night being very dark on that evening, which had disoriented and confused the sheep. Interestingly, another sheep panic of this magnitude would happen yet again in 1893, in the exact same region as that of 1888, and this caused even more people to become curious as to why. One of these was the naturalist Oliver Vernon Aplin, who was able to find some curious details this time around, including a lot of eyewitness testimony sent to him by people claiming to have seen strange lights in the sky and other strangeness at the time of the panic. Aplin would say of this:

Mr. Neild writes :  ‘ Another man at Finstock is said to have seen a wonderful meteor at the same hour. ‘ Mr. Calvert thought it might have been caused by a sudden electrical or phosphorescent light playing fitfully on the ground — a sort of will-o’-the-wisp. Mr. J. Clowes, of Dunthrop, Chipping Norton, thought it was an electric disturbance, ‘ as we had strong lightning during the night afterwards. ‘ There were also other reports of this phosphorescent light, but I have met with no thoroughly satisfactory evidence of it, and it may be pointed out that if it was the general cause of the panic all over the great affected district, it would certainly have been actually seen by many of the numerous people who must have been out of doors during the early part of the night the panic took place. The same may be said of the supposed meteor; and upon this point it is instructive to observe that the extraordinary and brilliant meteor which attracted so much attention on the night of January 26, 1894, and, as noticed in the papers, even when the sky was covered with dense clouds, illuminated the whole landscape with a light so bright that objects became nearly as visible as in ordinary daylight, was not accompanied or followed by any panic among the sheep.

Aplin was skeptical that this was anything other than panic caused by unusually thick darkness on the night in question. He would claim to have gathered many reports of a low-lying “extraordinarily black” bank of clouds that had fallen over the area on an already moonless night, smothering the region in such a profound darkness that “a man could not see his own hand.” This dark cloud had apparently seemed to roll over the ground itself, and lasted about 40 minutes, during which time the land was like “being in a dark room.” According to Aplin, the sheep had then become disoriented and scared, after which an infectious panic had run wild through their ranks, and this was the culprit. In the end we simply don't know. It happened so long ago that it is hard to say. What could have caused so many sheep to suddenly lose it over such a large area at the same time? Was this lightning, darkness, an exploding meteorite, UFOs, or what? We may never know for sure.

An Ancient, Legendary Monster That Wasn’t What It Seemed To Be