The Strange Case of the Last Wendigo Hunter

As long as there have been demons and monsters in our world and those who believe in them, there have been those willing to fight them. Every culture that has evil supernatural entities has ways to battle them, and those who would go head to head with them and step up ready to battle. In modern times, such beliefs and traditions have faded, their traditions replaced by the inexorable march of science and the rational. In the wilds and cold expanses of the North American continent, the Natives of the region had their own stories of sinister entities that stalked the night, and they too had those who would fight them. In the early 20th century one such fighter of demons would take his last battle before succumbing to the invasion of the modern world and the death of traditions. This is the tragic story of one of the last hunters of the evil creatures of Native lore known as the Wendigo.

Originating within the myths and lore of various Algonquin-speaking tribes of Nova Scotia, the East Coast of Canada, and Great Lakes Region of Canada and in Wisconsin, United States, including such tribes as the Ojibwe, the Saulteaux, the Cree, the Naskapi, and the Innu, the monstrous entity called the Wendigo has long been feared. Mostly described as a gaunt, almost skeletal monstrosity standing up to 15 feet high, with sharp claws, formidable fangs, skin tightly stretched over the bones, and with animalistic features. They are said to possess powers such as mimicking voices, superhuman strength, mind control, weather manipulation, the generation of darkness, and the ability to create confusion and fear, as well as others. The lore of the Wendigo, which is often ominously translated as “the evil spirit that devours mankind,” varies slightly from tribe to tribe, but it is always seen as a malevolent creature with an intense, uncontrollable perpetual hunger for human flesh, and often said to possess the minds of others in order to drive them to cannibalism. Indeed, one was seen as perfectly able to be changed into a Wendigo, in most cases if they resorted to eating the meat of another person, or through magic woven by another Wendigo, and humans were also at times said to be possessed by the creatures. This was seen as a constant threat, and turning into a Wendigo or being possessed by one was seen by the Natives of these lands as a fate worse than death. 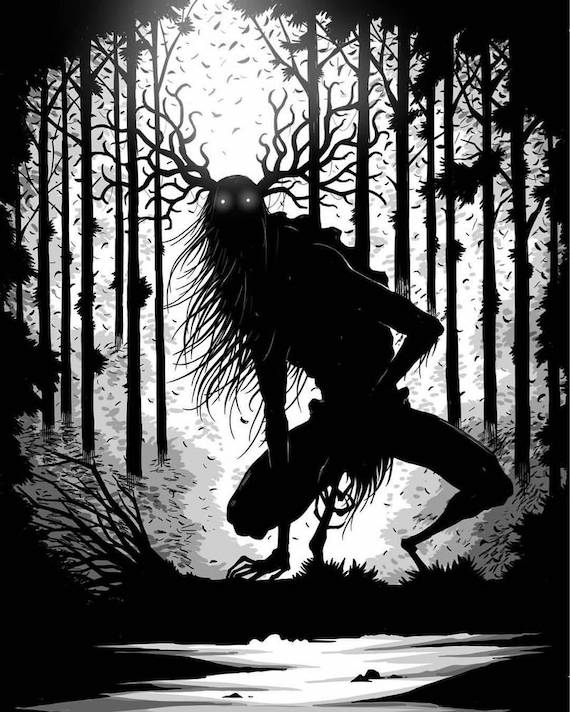 One of the most famous cases of someone allegedly being possessed by a Wendigo comes from 1878, when in Saskatchewan, Canada, a Cree fur trapper by the name of Swift Runner claimed that he had been possessed by insidious dark forces and had become a Wendigo after killing and eating his family during a harsh winter without food. Apparently local settlers went to the trapper’s home to corroborate the story and found a veritable charnel house of blood, strewn about body parts, and half-eaten corpses in such a jumbled morass of gore and effluence that it could not even be ascertained how many people had been killed. Swift Runner was then publicly executed for his crimes and his body buried far away, as some of the Cree claimed that his corpse would be reanimated by the Wendigo within him.

Such tales abounded, and the tribes who feared the Wendigo took all of this very seriously. For them it was beyond mere lore and legend, but rather a very real threat, something that lurked in the shadows and had to be dealt with. Each tribe typically had its own ceremonies, rituals, and talismans to ward off the creatures or stop a person from becoming one, but in most cases the final line of defense in fighting this supernatural threat was the tribe’s shamans. The intervention of a shaman was typically sought as a last resort, when a person was obviously in the final throes of fully turning, during which they would exhibit delirium, insanity, potent nightmares, the uncontrollable urge to run naked through the woods, and of course an irresistible need to eat human flesh. At this point in the transformation, it was seen as beyond the point of using rituals or ceremonies, and that a shaman was needed to battle the creature, put it to death, and consecrate the corpse. These shamans were highly sought after and revered, and one of the most famous and feared of these Wendigo hunters was the man known as Zhauwuno-geezhigo-gaubow, or “he who stands in the southern sky.”

Born in the 1830s and known to white fur traders as "Jack Fiddler," Zhauwuno-geezhigo-gaubow was born an Oji-Cree and in particular he was affiliated with the Sucker clan, now called the Sandy Lake First Nation, of Sandy Lake, on the upper reaches of the Severn River in northwestern Ontario, Canada. Within the region, Fiddler was nearly legendary as a powerful shaman and healer, attributed with vast supernatural abilities such as the power to shapeshift, conjure up animal spirits, chase away evil spirits, deflect spells, and many others, but he was most well known as a Wendigo hunter. In fact, Fiddle and his brother, Pesequan, were widely thought by the Cree to be the most powerful Wendigo hunters there were, with Fiddler once claiming to have personally killed 14 of the foul beasts over his lifetime, including one of his own brothers who had apparently gone Wendigo after having resorted to cannibalism out on a trading expedition in order to survive. Unfortunately, this was the age of white settlers pouring into the region, and the idea of killing people due to suspicion that they were supernatural monsters did not sit well in this new world.

Up until then, the Cree peoples had managed to largely live apart from civilization, more or less untouched by the coming of the white man and their outlandish ways. They had resisted Christian missionaries, remained apart from the law of the colonists, and still lived by the old ways, indeed remaining one of the only tribes still living under their own laws and traditions, but nothing can last forever, and in 1907, the Canadian government decided to investigate the claims that this man Jack Fiddler was waging a war against cannibalistic spirits. During an investigation by the Canadian Royal Mounted Police, a First Nations woman by the name of Wahsakapeequay turned up dead, strangled to death with a rope and the scene of the body displaying signs of a ritual. Jack Fiddler and his brother made no real attempt to hide the fact that it had been them, and that they had killed her because her family had asked them too, even helped them, as she had been transforming into a Wendigo. Up until then this never would have been seen as totally strange by the Native people of the region, a necessary evil in their fight against sinister forces, but in the view of the Mounties and the white settlers they represented this was called murder.

Both Fiddler and his brother were arrested and charged with murder in the case of Wahsakapeequay, and the story of these two Wendigo hunters out in the savage wilds drew sensationalist headlines around the country. To the white settlers reading this, it was a tale of devil-worship, black magic, and deadly superstition among the untamed savages of the uncharted wilds, and it drew much call to bring the Native people under control and impose their own laws on them. In this way, it seemed as if they meant to make an example of Fiddler and his brother, and although there was little cooperation among the tribe members and few willing to testify against the brothers, they were still found guilty. However, Fiddler managed to go out on his own terms, escaping his imprisonment to go off and hang himself from a tree with his own sash. The brother Pesequan was subsequently found guilty and sentenced to hang by the government, although he died from illness in 1909 before the sentence could be carried out, sadly just three days before a pardon went through. And so ended the days of perhaps the last two Wendigo hunters out there and sealing the fate of the tribe to fall under the colonial laws of the settlers. It is certainly a sad tale of the end of tribal beliefs, and whether these Wendigo ever really existed or not the people of the region certainly believed that they did and that they were a threat. Wendigo accounts have continued on sporadically into modern times, and there may even be people devoted to fighting them, but none who have been so high profile as Jack Fiddler, and part of the traditions of these beasts died with him.