The Strange Tale of the Oldest Science Fiction Novel

Science fiction has been around entertaining people for a long time. Throughout its run we have seen all manner of fantastical stories spanning worlds beyond ours and concepts that have always pushed the boundaries of what we know. If you were to guess just how long the genre of science fiction has gone back, what would you think? Perhaps to the 19th century, the 18th, even earlier? Well, according to a lot of opinions it goes back way further than that, and one of the texts thought to be among the first is a novel from way back in the 2nd century, which has gone on to become regarded as perhaps the fist science fiction novel ever made.

The book in question is called Vera Historia in Latin, and variously A True Story or A True History in English, and is perhaps the best-known work of the prolific, influential and very popular 2nd century Greek-speaking, Hellenized Syrian author and satirist Loukianos, also called by Lucian of Samosata or just Lucian.  He was mostly known as a biting satirist and rhetorician, often poking fun at superstitions, the paranormal, folklore, and religion, and he was feared for his sharp tongue and wit, which he used like a laser beam to ridicule pretty much everything and everyone. In between all of this satire, parody, criticism, and actually inventing the genre of comic dialog along the way, he also penned A True Story, which is quite a trippy tale infused with all manner of strangely prescient ideas and elements that would influence in one way or another the genre of science fiction right up to the present.

The novel itself is rather difficult to explain without sounding like a bad acid trip. It starts with Lucian cryptically stating it is about “things I have neither seen nor experienced nor heard tell of from anybody else; things, what is more, that do not in fact exist and could not ever exist at all. So my readers must not believe a word I say.” We then begin the adventure with Lucian himself as a character, heading out past the Pillars of Heracles, at the Strait of Gibraltar, only to be blown off course by a sudden storm, which then really takes them down the rabbit hole. They take a river of wine to an island filled with bears, fish, and trees shaped like women, after which they are taken by a whirlwind up to the moon. Here they find that there is a war going on between the King of the Moon and the King of the Sun, who are fighting a very bloody war over what is called “The Morning Star,” which is in fact Venus. Both of these kings have vast armies full of hybrid monsters and robots, and they clash until the King of the Sun winds but blotting out the sun’s light with an enormous wall. There is then a description of life on the moon, where there is an artificial atmosphere, the people eat flying frogs smoked on coals, there are no women, and men give birth through their calves, and he writes:

In the interval, while I was living on the moon, I observed some strange and wonderful things that I wish to speak of. In the first place there is the fact that they are not born of women but of men: They marry men and do not even know the word woman at all! Up to the age of twenty-five each is a wife, and thereafter a husband. They carry their children in the calf of the leg instead of the belly. When conception takes place the calf begins to swell. In course of time they cut it open and deliver the child dead, and then they bring it to life by putting it in the wind with its mouth open. 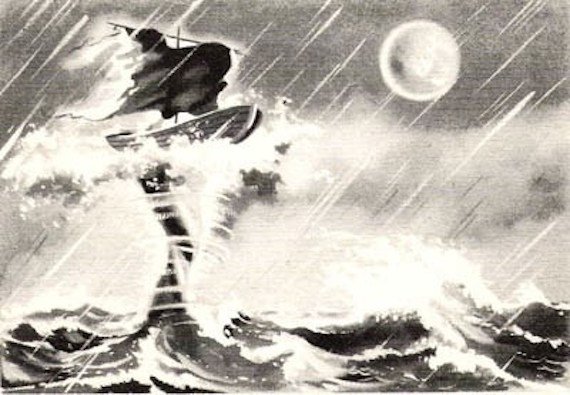 This is very typical of the completely surreal imagery on display in this book. After some time on the moon, they were off on the next leg of their adventure. After returning to Earth, getting swallowed by a 200-mile-long whale to wage war against a race of monstrous fish people, then escaping, they come across many strange islands including one made of cheese in a sea of milk, and have many adventures, meeting mythical monsters and figures from history such as the heroes of the Trojan War, Homer, and Pythagoras. They then sail around a chasm in the middle of the ocean and see a new continent far off over the horizon, which they go off to explore. Lucian promises the reader that the story will continue in a sequel. The end. No sequel ever came, at least not that we know of, and the sheer amount of weirdness to this tale had people of the era scratching their heads. After all, this was the 2nd century, and Lucian was describing such weighty concepts as space travel, hybrid beasts, mutants, robots, colonization of other planets, alien lifeforms, artificial atmospheres, and intergalactic war, which were all things that at the time were well beyond what anyone ever considered before.

This was, after all, a time before planetary telescopes and when the idea of space travel and aliens wasn’t even a thing, indeed before modern day science as we know it was even a thing. This stuff was well before its time, and although readers in the era were not sure what to make of it, A True Story would definitely pick up speed in later years. It directly influenced later works, including those of the French novelist Cyrano de Bergerac, whose novels in turn directly influenced those of Jules Verne, who is often called “The Father of Science Fiction,” as well as works such as  Sir Thomas More’s Utopia (1516) and Jonathan Swift’s Gulliver’s Travels (1726). 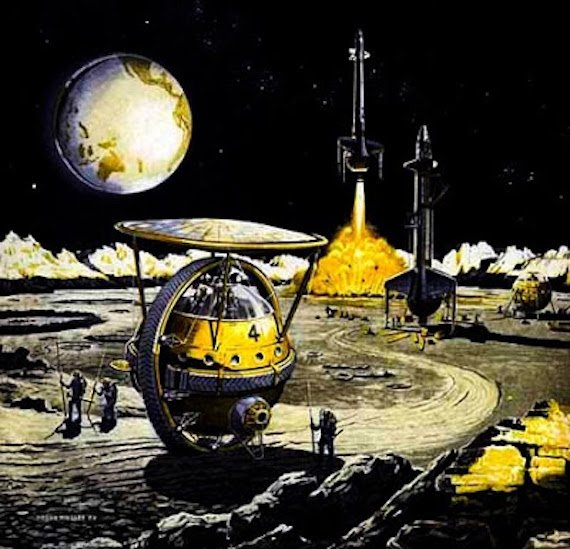 It seems that with all of these elements that were unheard of in their time and which went on to become tropes of science fiction as we know it, there is actually a surprising amount of academic debate revolving around whether Lucian’s work can be truly considered to be “science fiction.” It has been pointed out by sci-fi purists and classicists that “A True Story” was nothing more than a satire, meant to make fun and mock of all of the absurd and outlandish traveler’s tales that were the rage at the time. Lucian even straight out says this at the beginning of the novel. To some snobs of the literary world, science fiction did not really exist in its true form until after the Industrial Revolution, but of course considering the themes and groundbreaking weird ideas of the future Lucian was covering of course it could be considered science fiction. Perhaps it can be categorized as a bit of both, but whatever you want to call it, A True History at the very least inspired the genre further down the line, and used tropes common to sci-fi long before anyone else. Whatever its status might be, it is a compelling peek at these ideas and common themes of science fiction being thrown around long before it was ever popular to do so, and a strange little historical oddity.