Experts reconstructed the remains of a prehistoric horse and it looked nothing like the long legged animal we’re accustomed to seeing today. The 48-million-year-old tiny horse was the size of a small dog and looked similar to a badger.

The horse species is called Propalaeotherium voigti and its remains were discovered in 2015 in an oil pit that’s located in Messel (close to Frankfurt), Germany. Back in 1995, Messel Pit was recognized as a UNESCO World Heritage site as many exceptionally well-preserved fossils have been unearthed there. In fact, it is the richest site in the entire world for information on the Eocene Period from around 57 million to 36 million years ago. The site is particularly rich in history regarding the early stages of mammal evolution.

The Propalaeotherium voigti species was part of a genus of prehistoric horses that came from Europe and Asia during the early years of the Eocene epoch period. Interestingly, the ancient tiny horse species looked similar to modern tapirs that are currently living in Asia and South America.

Tapirs are herbivores with a round body, short legs, a stubby tail, and a trunk-like snout. They can grow anywhere from 29 to 42 inches (2.4 to 3.5 feet) from foot to shoulder and weigh between 500 and 800 pounds (227 to 363 kilograms). They have been around for approximately 20 million years and evolution hasn’t changed them much during that time.

As for the tiny horse species, Propalaeotherium voigti, they weighed only around 22 pounds (10 kilograms) and weren’t very tall at just 20 inches in height. Their fur would have been very similar to the coats found on today’s deer. They had a short neck, arched back, and “hooflets” that would have helped them to get around Europe’s ancient rainforests. They feasted on leaves and berries that they would have found on the ground of the forest. Additionally, they would have traveled and lived in small herds. (Pictures can be seen here.)

It was only in the late Eocene period (approximately 33.9 million years ago) that the evolution of horses gave them longer legs and individual toes, as well as changing their diet from leaves to grass. 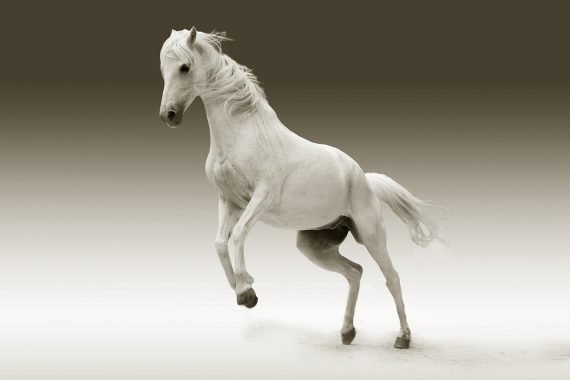 The reconstruction of the Propalaeotherium voigti was scheduled to go on display at Germany’s Hessian Landesmuseum Darmstadt on August 18th thanks to palaeontologist Martin Fischer of the Friedrich-Schiller University in Jena along with artists Amir Andikfar and Jonas Lauströer who put their talents to work creating a 3D reconstruction of the tiny horse based on the detailed information gathered from a high-resolution CT scan.

Almost 100 Brown Dwarfs Near Our Sun Have Been Recently Discovered