It may come as a surprise to some to learn that being attacked by an unknown animal is not that rare. Over the years and decades more than a few people have spoken of their encounters with strange creatures of the hostile type. We'll begin with a man named Marlon Lowe. Back in the 1970s, as a child, he had a terrifying encounter with a mysterious, unknown, large bird. At the Lincoln Courier, we learn the following: "At 8:30 p.m., July 25, 1977, two giant birds swooped down on a backyard in Lawndale and attacked a 10-year-old boy. One of the birds latched on to the youngster and started to carry him away, but the boy’s mother began beating on the bird until it released her son. Depending on what account is used as a reference, the lad weighed either 50, 56 or 65 pounds. Whatever number is selected, it’s a big load for any bird to lift off the ground." Marlon's mother told the police: "It had a white ring around its half foot long neck. The rest of the body was very black. The bird’s bill was six inches in length and hooked at the end. The claws on the feet were arranged with three front, one in the back. Each wing, less the body, was four feet at the very least. The entire length of the bird's body, from beak to tail feather was approximately four and one half feet." The mystery was never solved.

Now, let's take a look at the "Texas Chupacabras" (which are really hairless coyotes noted for a number of bizarre mutations almost certainly caused by what are known as mutagens). A few years ago, while I was writing my Chupacabra Road Trip book, I had the good fortune to interview a South Texas rancher who had a very strange experience a few years earlier. He was working in his fields when he had that eerie feeling we all get now and again. Namely, that of being watched. He turned around and saw no less than a trio of Texas Chupacabras - all staring intently at him. Not only that, they were carefully and closely moving towards him from a distance of around eighty or ninety feet - maybe a bit more. Although he had a gun in his truck, he jumped into his truck and left the field. As the rancher told me, he got the distinct feeling that the three were planning on making him their meal. He was also disturbed by the fact that these mutated coyotes were out hunting during the day and without any apparent fear of him. A lucky escape? Maybe. 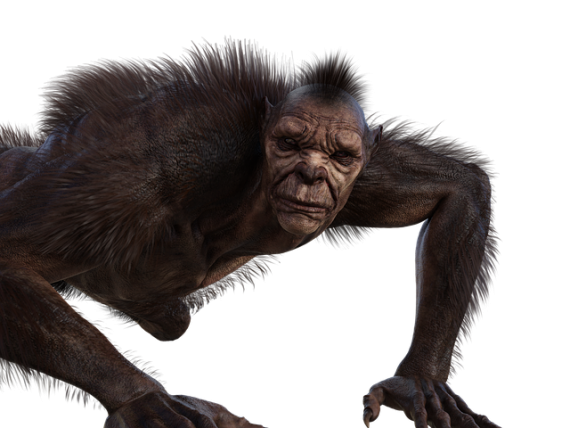 From various parts of South America, including Columbia, Ecuador, and Venezuela, come stories of a massive, mighty, and extremely violent Bigfoot-type beast known as Mono Grande. One of the most fascinating – but also disturbing and tragic – stories came from Count Pino Turolla, an archaeologist who traveled the world, Indiana Jones-style, in pursuit of all things mysterious and fabulous. Turolla (who died in 1984 at the early age of sixty-two) was born in Yugoslavia and later immigrated to Canada. Of note, he developed what became known as the Turolla Control-Descent Parachute that was used by the U.S. military.

It was while traveling across South America in the 1960s that Turolla first heard of the marauding monster. The information came from Turolla’s personal guide, Antonio, who told a shocking story. Some years earlier, Antonio and his two sons traveled to a particular range in Venezuela where they were confronted on the sprawling savannah by a trio of enormous, gorilla-like animals that were around eight feet in height, had long and hanging arms, and tiny heads. Not only that, they were armed with large and crudely fashioned wooden clubs. A violent altercation occurred, something which resulted in one of Antonio’s sons being bludgeoned to death by the merciless monsters.

Born in the town of Raphoe, Ireland in 624 AD, St. Adomnán spent much of his life on the Scottish island of Iona where he served as an abbot, spreading the word of the Christian God and moving in very influential and power-filled circles. He could count among his friends King Aldfrith of Northumbria and Fínsnechta Fledach mac Dúnchada, the High King of Ireland. And he, St. Adomnán, made a notable contribution to the world of a certain, famous lake-monster.

St. Adomnán’s Vita Columbae (in English, Life of Columba) is a fascinating Gaelic chronicle of the life of St. Columba. He was a 6th century abbot, also of Ireland, who spent much of his life trying to convert the Iron Age Picts to Christianity, and who, like Adomnán, was an abbot of Iona. In 563, Columba sailed to Scotland, and two years later happened to visit Loch Ness – while traveling with a number of comrades to meet with King Brude of the Picts. It turned out to be an amazing and notable experience, as Vita Columbae most assuredly demonstrates. Adomnán began his story thus:

"…when the blessed man was staying for some days in the province of the Picts, he found it necessary to cross the river Ness; and, when he came to the bank thereof, he sees some of the inhabitants burying a poor unfortunate little fellow, whom, as those who were burying him themselves reported, some water monster had a little before snatched at as he was swimming, and bitten with a most savage bite, and whose hapless corpse some men who came in a boat to give assistance, though too late, caught hold of by putting out hooks."

If the words of Adomnán are not exaggeration or distortion, then not only was this particular case the earliest on record, it’s also one of the very few reports we have in which one of the creatures violently attacked and killed a human being. Adomnán continued that St. Columba ordered one of his colleagues – a man named Lugne Mocumin - to take to the River Ness, swim across it, pick up a boat attached to a cable on the opposite bank, and bring it back. Mocumin did as St. Columba requested: he took to the cold waters. Or, more correctly, to the lair of the deadly beasts.

Evidently, the monster was far from satisfied with taking the life of just one poor soul. As Mocumin swam the river, a terrible thing ominously rose to the surface, with an ear-splitting roar and with its huge mouth open wide. St. Columba’s party was thrown into a state of collective fear as the monster quickly headed in the direction of Mocumin, who suddenly found himself swimming for his very life. Fortunately, the legendary saint was able to save the day – and save Mocumin, too. He quickly raised his arms into the air, made a cross out of them, called on the power of God to help, and thundered at the monster to leave Mocumin alone and be gone. Amazingly, the monster did exactly that.

In view all of the above, be very careful the next time you go looking for strange and unknown animals.