A Monstrous Encounter: “The Animal Began To Swim Towards Me”

When it comes to the matter of lake monsters, there are three such beasts that really - and immediately, of course - spring to mind. They are Nessie of Loch Ness, Scotland; Ogopogo of Okanagan Lake in British Columbia, Canada; and Champ, which is "... said to live in Lake Champlain, a 125-mile (201 km)-long body of fresh water shared by New York and Vermont, with a portion extending into Quebec, Canada." There have been spectacular sightings of all three. And, inevitably, this monstrous trio tend to eclipse some of the lesser-known cases and creatures of the murky deep. With that all in mind, though, I thought today I would share with you a little-known case. It's a case that despite hardly considered to be famous, is just as significant as its far more legendary cousins. Although far less known than its counterparts, the mysterious beast of Lake Storsjon, Sweden, has been seen on more than a few occasions. Indeed, Sweden is said to be the home of more than a few Swedish lake monsters. While many of the sightings of Lake Storsjon are admittedly somewhat vague and open to interpretation, one which occurred in 1878 is most definitely not. It came from a man named Martin Olsson. He was a mechanic at the nearby Ostersund sawmill, and who lived in a cabin at the edge of the lake. He described his dramatic encounter with the monster: 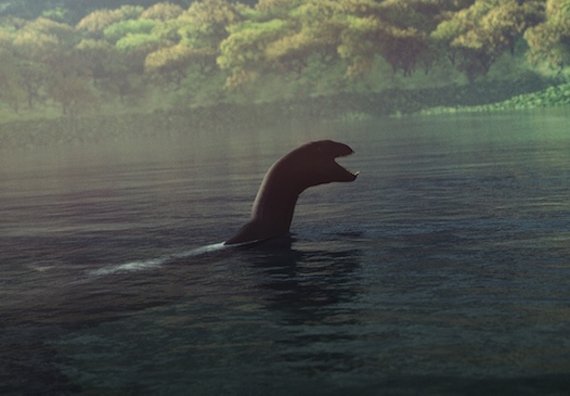 Olsson continued with the saga: "I was fishing near Forson Island when I got a strange feeling someone was watching me. I looked behind me and the lake creature was not more than forty meters behind my boat. I dropped my pole and line in the lake when I saw it. The weather was bright and sunny and I got a good view of the animal. The neck was long, about as round as a man’s body at the base where it came up out of the water. It tapered up about six feet to a snake-like head that was larger than what I figured the neck could support. There was a hairy fringe just back of the neck. Hanging down the back. This ‘ribbon’ was stuck close to the neck, possibly because of the wetness. The color was greyish brown. The thing had two distinct eyes that were reddish in appearance. There were a couple of dark humps visible beyond the neck. Both of these humps, and the part that was out of the water, glistened in the sunlight. I did not see scales. There was a skin on the animal that resembled the skin of a fish.

He concluded his fascinating story: "I didn’t want to alarm the animal, but I did want to get away as quickly as possible. Moving very cautiously, I took my oars and pulled slowly away from the spot. I became even more frightened when I had rowed about ten meters distance and the animal began to swim towards me. I stopped rowing, and the thing just lay there in the water staring at me. This much have gone on for about five minutes. I’m uncertain because my mind was on anything but the passage of time. There was no doubt in my mind that this thing could have overturned my little boat. I thanked god when he dropped beneath the water and I saw a blackish hump move out in the opposite direction."

As this example demonstrates, some of the most intriguing sightings of lake monsters involve some of the least known creatures. That's something to ponder on when you next take a trip to your nearest lake. You may not known what lies within its depths. Until it's too late...