A NASA Whistleblower and Alien Bases on the Moon

In the 1960s and early 70s, the U.S. space program was deeply involved in studying the lunar surface, launching its famous, historical Apollo program, also called Project Apollo, conducted by the National Aeronautics and Space Administration (NASA). The ambitious program, which ran from 1961 to 1972, was notable for landing the first human beings on the moon in 1969, with astronauts Neil Armstrong and Buzz Aldrin making landing on the lunar surface with their Apollo Lunar Module, and there would be five further Apollo missions that would also land American astronauts on the moon. The program also set quite a few other major milestones in spaceflight, spurred growth in various areas of technology that have had far reaching effects beyond space travel, and with the many photos and lunar surface samples that were taken it taught us an unprecedented amount of information about our nearest celestial neighbor. Yet there have long been many mysteries and conspiracies surrounding the Apollo program and moon as well, and one of these is the supposed trainer of astronauts and keeper of moon photos who claims that there were many instances of photos of an alien presence on the moon, and efforts by NASA to cover it all up.

Among the scores of people who made the whole program work was aerospace engineer, pilot, and astronaut trainer Ken Johnston, who according to him was one of the four Civilian Astronaut Consultant Pilots who helped train astronauts for the Apollo 11 mission. Hired by Grumman Aircraft Corp., one of Johnston’s main duties at the time was cockpit and instrument development and training, as well as to test the lunar mission module in the vacuum chambers in order to make sure they were safe for flight, in the process helping to train the astronauts in how to land it. Johnston would supposedly later take on other duties, such as allegedly working at the Lunar Receiving Laboratory, which dealt with processing and analyzing various samples taken from the moon, as well as photographs. Johnston says he handled the photographs from five of the Apollo missions, which were stored, curated, catalogued, and often sent off to scientists to be studied and analyzed. Indeed, Johnston claims he was the Director of the Data and Photo Control Department, and so had access to all of the photographic data being sent back to Earth from the moon, including photos, film and slides. It is with his work here that the conspiracies and strangeness begins.

When the Apollo program began to wind down and the samples were mostly sorted and take care of, Johnston was surprised when his superior, Bud Laskawa, told him to destroy all of what remained of the photo archive, and special emphasis was put on making sure a collection of glossy 8 by 10 prints never saw the light of day. He claims that the reason for this was that many of the photos had strange anomalies in them that NASA did not want the public to see, and which they were very interested in keeping quiet about, to the point that, according to Johnston, the photos would often be altered to cover up anything weird in them, with extensive manipulation and doctoring done on them to hide what he says were evidence of some sort on nonhuman structures on the lunar surface. He has said of all of this in an interview with Indian researcher Parvathi Benu:

Once we were done with the first three missions, I was put in charge of photographing and documenting their exact location. One day, my boss ordered me to destroy these images. I reminded him that the government had paid for them and that they should be made public to which he replied, “No. Get rid of it. I don’t care what you think.” It was because there were elements in the pictures that were unexplainable. You can see the lunar anomalies too. It looks like something has been smudged out. Way before Photoshop, they would paint things out. Once, when I walked into the photo lab, I saw a woman painting something out. She called herself a ‘stripper’ and said that she was paid for it. This really upset me as I was in charge of keeping a record of things. I guess that’s why they call me a whistleblower.

Johnston would end up defying his orders and keeping a set of these photos for himself as part of his personal portfolio and as evidence of what he had witnessed. He would sit on these photos for years, keeping them secret and afraid to come forward with them or show them to anyone else until 1995, when Johnston attended a lecture being given by the somewhat controversial researcher Richard Hoagland. After the seminar, Johnston allegedly approached Hoagland with his photo set, and the two would look through them together. According to Hoagland, the photos were very intriguing, and definitely showed evidence of an alien presence on the moon. Hoagland also claimed that he was allowed to take scans of the prints, which he says allowed him to uncover further details on analysis, and he would write of the photos in the 2007 book Dark Mission, saying:

In scanning Ken's priceless Apollo 14 C-prints, I'd discovered that the computer could "see" what the human eye could not—incredible geometric detail in the pitch black areas, like the lunar sky. The sensitivity of modern CCD imaging technology, in even commercially-available image scanners, coupled with the amazing enhancement capabilities of state-of-the-art commercial software — like Adobe's Photoshop—allowed the invisible detail buried in these supposedly black layers, of these thirty-year-old emulsions, to ultimately be revealed—a "democratization" of technology that no censor at NASA could have possibly foreseen over more than thirty years. 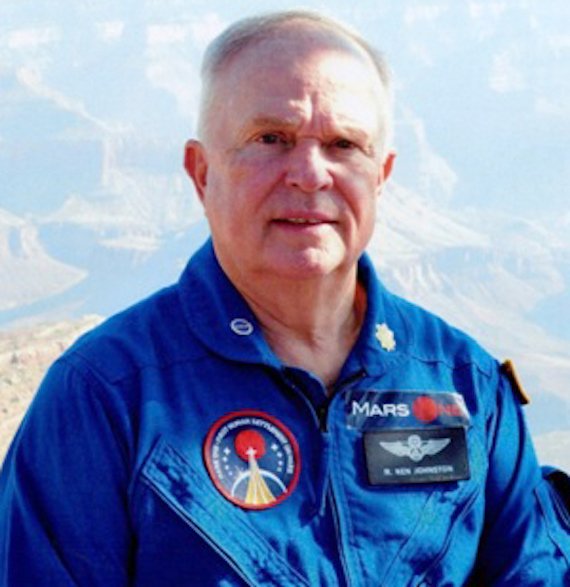 Hoagland would then go on to exhibit and lecture extensively on these photos, claiming that he had found all manner of anomalies in them that had never been uncovered before, but there has been quite a bit of skepticism towards these bold claims. One excerpt from the rational wiki has pointed out one the problems with these scans and Hoagland's claims as follows:

Of course scanning cannot reveal "invisible detail" if it truly is invisible. Hoagland has made a career out of trumpeting the fact that his scans of Ken Johnston's collection show things that the "official" scans do not. But of course, he's comparing, on the one hand, a professionally scanned image from an original negative or internegative done in a clean room — and on the other hand, a photoprint stored in a ring binder for 23 years, then pulled out and scanned on Hoagland's office scanner, the glass of which is quite clearly contaminated. For use as Powerpoint™ slides, Hoagland typically slams up the brightness — a procedure guaranteed to reveal any scanner contamination wherever the image is black.

The scans have been written off by skeptics as merely showing imperfections and artifacts in the scanning surface, such as blemishes or fibers. Regardless of what Hoagland’s scans show, they were responsible for making Johnston’s photos public, and Johnston himself would begin to be more open with his original collection, releasing them to the public for free in 2015 and donating the collection to the Roswell International UFO Research Center and Museum. Those who have looked at the photographs for themselves have claimed to see all manner of strange things in them, including satellite dishes, statues, ruins, buildings, and even a lunar alien base with visible lights and structures. 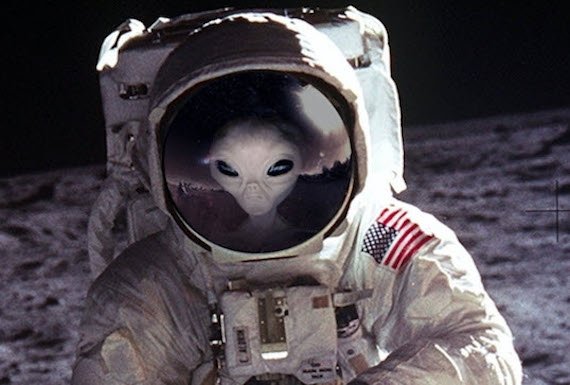 In the meantime, Johnston has travelled and lectured extensively on what he calls a NASA cover-up, as well as conducting various interviews. One of the most well-known and controversial of Johnston’s claims is that there were photos from the Apollo 14 mission that supposedly showed an alien base in Tsiolkovsky, an enormous crater on the back side of the Moon. Johnston claims that when he first saw the photographs he could see lights and a pentagonal cluster of domes showing that it was clearly a facility of some sort, but that the next day it had all been doctored to erase it. According to him it had essentially been airbrushed out. This claim has also become controversial, because according to NASA records Apollo 14 never flew over Tsiolkovsky and it was never photographed, although Johnston denies this.

Even in the face of such harsh criticism Ken Johnston has nevertheless become almost legendary as a “NASA whistleblower” and champion of disclosure, and over the years his claims have gone ever more into the fringe, such as that there are bases on Mars and that he has been hypnotically regressed to learn that it was in fact aliens that had told him to defy NASA and come forward with his strange findings. This has understandably brought a lot of attention to him, both by UFOlogists and conspiracy theorists, as well as skeptics, who have constantly challenged Johnston’s claims even as controversy surrounds him. One of the red flags that has come up is that Johnston has increasingly claimed that he is an actual astronaut, which is false, and he has been found to frequently misrepresent himself and blow up his credentials, also sometimes labelling himself as a former "chief trainer at NASA,” all of which has gotten him in hot water with NASA and the State Department. He has also made other extravagant claims that have been seen by skeptics as questionable at best, such as that he has a "Doctor of Metaphysics" diploma, and his close colleague Bret Sheppard, who often accompanies him to lectures, has also been a controversial figure within the UFO field.

For his part, Johnston has continuously fought off his critics and insisted it is all real. We are left to wonder, is there anything to this? Is Ken Johnston for real, or is he a fraud? Is this for real or a hoax? It has become hotly discussed and debated, and it shows that the moon will likely attract stories like this for some time to come.

Extreme Exoplanet Is So Hot That It Can Vaporize Iron