Captain Jack Sparrow is right, of course (when is he ever wrong?) … even when his ship is floating upside down, as it did in “Pirates of the Caribbean: At World's End.” That fictional scene inspired real-life physicists to attempt to recreate it and, despite not having Jack Sparrow on their crew, they managed to do it. When will we see this in a Disney park?

“Bodies” as in boats? Yes, according to a new paper published in the journal Nature. Dr. Emmanuel Fort, a professor at France’s ESPCI Paris and author of the paper, was actually just trying to levitate a liquid – an impressive accomplishment in its own right – and the upside floating boat was an unexpected surprise. Fort told The New York Times he got the idea after hearing the theory of Kapitza’s pendulum. In 1951, Russian physicist Pyotr Kapitsa, a Russian physicist who in 1951 described how a pendulum could be made to wing upside down if vibrated at the correct frequency. To improve on this, Fort decided to try it with a liquid.

Jack Sparrow would have observed that we’ve referred to a liquid, but not to water. That’s because water makes too many waves and ripples when vibrated. However, glycerol and silicon oil have the viscosity to prevent waves, so that became the liquid of choice. At 100 cycles a second, vibrations caused bubbles injected into the oil to be pushed downward, forming an air cushion that levitated the oil. And not just a few drops – they were able to levitate half a quart of oil spread about eight inches across.

At that point, Captain Sparrow might say it was time to play, so Fort’s team start seeing what they could float on the floating liquid. A 3-D printer provided plastic ducks and frogs that worked, and then they tried the obvious – a tiny boat. When that worked as well, they tried something crazy … a second boat on the other side of the liquid. 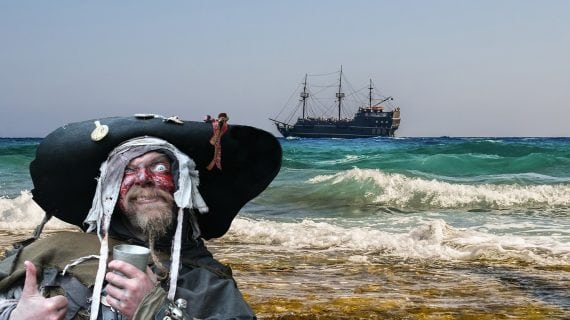 As the video in the article shows, Fort’s team was able to float the liquid with a boat on the top and upside down on the bottom. Sure, it’s on a very small scale, but the physicists believe the volume could increase with the strength of the vibrations, making the technique usable for use in industrial machinery. That’s because they’re physicists, not Captain Jack Sparrow.

“Did everyone see that? Because I will not be doing it again.”

The First Chinese Emperor and His Bizarre Quest for Immortality