Creepy Tales of Dogs and the Paranormal

There has long been believed to be a whole other world beyond our normal perception, hidden beyond a veil through which only the very psychic and those with certain sensitivities seem to be able to gaze. One category of those able to peer into some sort of spiritual realm are animals such as dogs, and they throughout the ages have demonstrated an uncanny ability to perceive that which most of us cannot. Here we will look at some spooky cases of dogs penetrating through the barrier of the world of the living and dead, of the physical and spiritual.

One very creepy report comes from a Reddit user called “OldRockingChair,” who says that he had taken to letting his dog, which had been mostly an outdoor animal, sleep inside the house at night. At first they kept the dog downstairs, but for some reason this severely upset it, to the point that it had to be tied down every night. Finally, after a week of this, they decided to let the dog sleep upstairs with them, and this is where things would get weird. The poster says:

He didn't like being alone at night downstairs. He used to wake us all up with his whining. We thought he just didn't like being tied down, or wanted to be with us upstairs. Finally, I relented and brought him upstairs to sleep — no collar, no leash. It stopped the whining. But here's the thing. Quite literally every night at 3 a.m., our dog gets up and does an inspection of all the rooms. Not before 3 a.m., and not after. Our bedroom doors are always open, so he has free access all around. If he happens to be sleeping on someone's bed, he gets restless (waking up the person), and wants to be let down. Due to a small accident when he was a puppy, our dog is afraid of jumping down from places, even the small gap from the bed to the floor. But at 3 a.m., like clockwork, he wakes up. When we do let him down, he goes from room to room, then sleeps in the doorway of my parents' room. It's happened every night that we could observe him. We started bringing him upstairs early September. I don't know what happens in our house at 3 a.m., but several times, when we do "catch him in the act", he looks at the doorway of the room (whoever owns the room he happens to be in would wonder what the hell he's doing), then stares at the person looking at him, then at the doorway again. 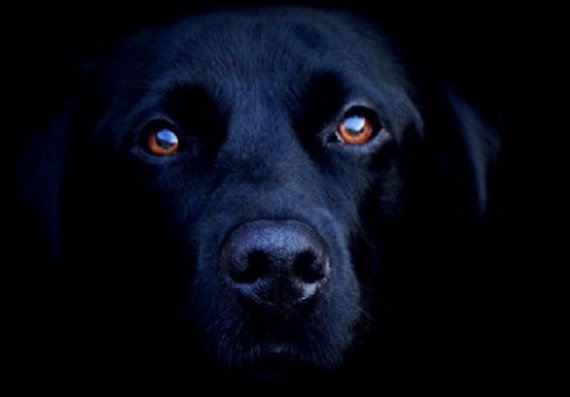 Interestingly, the hour of 3 AM is often said to be the “witching hour,” so perhaps there is something very strange going on here. Who knows? Many of the reports of dogs somehow sensing the paranormal revolve around their apparent ability to see or sense something we can’t, and a report from Reddit user “TheCyberTyger” also fits into this category. He says that this happened when he was younger, and that he and his parents at the time lived in a house in which minor ghostly phenomena such as anomalous noises and fleeting movement from the shadows already had them spooked. It got even spookier when the dog began to react to some presence there. The witness says of the experience:

When I was a kid, my family and I lived in a house that was curiously active. Nothing too concerning, just the occasional creak of footsteps during the night and small knick-knacks that would mysteriously tip over out of the corner of your eye. Anyway, one night I was sleeping in the bed that I shared with my two little sisters when our chocolate lab Remington lumbered into the room and jumped in between us. I was half asleep and scratching his ears when suddenly he jerks his head to the left and starts barking at the empty wall 3 feet away from me. After about 20 seconds of deep, back-bristled barking he relaxes, turns back to me, and continues licking my face. I'm not sure what he saw that night, but I'm pretty sure that dog saved me from starring in The Exorcist: Reality Show. My parents have long since moved away from that house, but I still have recurrent nightmares of waking up in my old room.

Another report comes from a poster called “Jujumanjaro,” who says that his dog immediately began acting oddly shortly after they got it as a puppy. In this case, the dog always seemed to respond to one particular area of the property for no reason that anyone could figure out. The witness explains:

My brother and I got us a dog, he is still a puppy around 15 weeks old, a very lovely and cute Labrador and we started to notice something... weird or creepy. It only happens when we walk him while it's dark outside, around 10PM-12AM and sometimes when he needs to pee during the night like 3-4AM we take him out as well. So the thing is he would always stare to that one direction right outside of our house and sometimes he is so focused of staring that he won't even listen or react to us not even a reaction when we softly pull the leash a bit. It's like if somebody is standing there and he is curios, because that's normal and dogs do that when they're curious. He even did this motion once with his head going from right to left as if somebody was walking there, but when I look there nobody or nothing is there just darkness and empty ways. I thought maybe he heard something, but there weren't any sounds around and especially not when it's 4AM. He wouldn't bark or move there, maybe because he is still young and scared and I heard that Dogs could possibly have a 7th sense. Does anybody know what this could be, maybe there is really a ghost standing there? 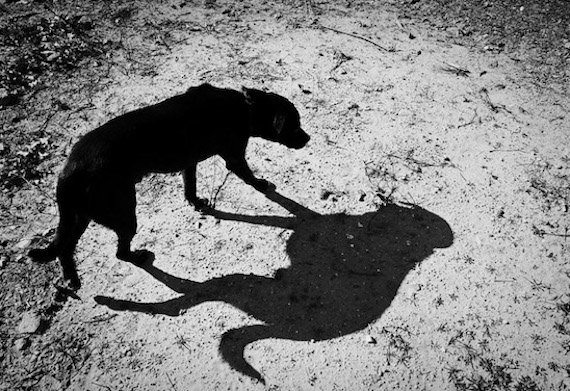 Similar to this is a report from user “octopoodle,” who says that his dog was normally very quiet and timid, but that on one occasion had a very strange reaction to the darkness beyond the door to the bedroom. The witness says:

I'm lying in bed reading with my dog at night. My bedroom door is open, and my room is the only room in the house with the lights on. It's completely silent. I took a quick glance at my dog. My dog is staring out the door into pure darkness. I see him slowly tilting to his head to the side, which he only does when he sees or hears something that seems bizarre. He growls for a good minute. Then, he notices me staring at him and wags his tail.

Another poster called “kupokupo” claims that her dog has the unsettling habit of waking up every night at the same time and growling at the doorway of the room she shares with her boyfriend. The dog was known to do this occasionally, and so although it was creepy they had gotten used to it, but one night would prove to be more frightening than most. The poster tells of this:

This night she woke up at 3:33 am on the dot. Growled loud enough that she starting drooling and snarling. She was up on all fours with her head lowered, looking at the doorway. I nudged her and told her to knock it off but she persisted. After about 5 minutes of this, the TV service cuts out. (We sleep with it on for noise) but it went out and cut to static. At this time my dog lowered herself to the bed lying flat, pulled her ears back and whined. Then she slowly moved her head from the doorway to the TV as if something was walking into the room. The TV shut off as she fixated her gaze upon it. I noped the fuck out, pulled my comforter over my head and refused to look around until it was daylight. My boyfriend and I swear our house is haunted. And if it isn’t, then our dog is possessed. 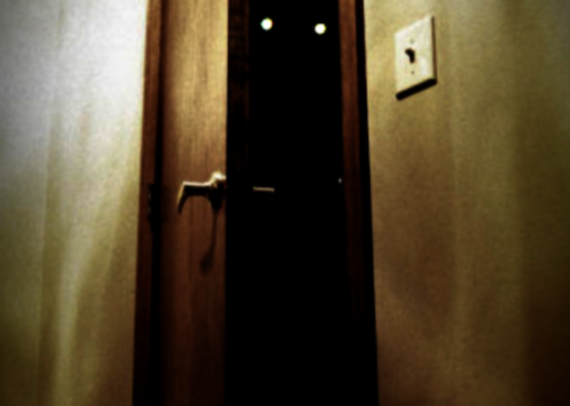 A very eerie account mixes this dog’s sense with the age-old Ouija board, and it seems that dogs and Ouija don’t mix. The witness in this case claims that this happened when she was a teenager and a friend had come over and that they had started playing with a Ouija board. During this session, she says that they managed to make contact with a spirit that called itself “John,” which was unsettling enough for them to end the game. Her friend then walked her home and this would be where things got even stranger. She says of this:

When we got to my place we decided to play again. We did this outside. My dog, Lucky, joined us; laid at my feet while we played. Well, we summoned a spirit. Asked for his name and we starting spelling J-O-H-N. Right when we were at the ‘N,’ Lucky jolts up and starts barking into the darkness of a long empty corridor. He goes crazy, as if he was about to attack. Lucky never ever barked, he was the most docile Shih-Tzu you’d ever meet. This night though, he was on attack mode. My best friend and I immediately stop and burned the board. We never played again.

There are countless other reports of dogs staring or barking at something that isn’t there, and we are left to wonder just why this might be. Are dogs attuned to something that isn’t there, something beyond our ability to perceive? Are they able to see beyond the veil and notice the strange entities and spiritual beings that are perhaps all around us but which we are usually unable to see? It has often been said that dogs have a sort of sixth sense to these sorts of things, with their heightened perceptions able to gone in on certain cues that we usually can’t pick up on, perhaps gaining glimpses into a whole other realm that we cannot comprehend, and one Pet psychologist Marti Miller has said of this:

The simple answer is, we don't know that dogs see ghosts or spirits. If you observe a dog standing in the corner, barking at nothing visible, then there's a pretty good chance that he's barking at an entity, spirit, or energy that doesn't belong there.

Do dogs have a special ability to tune into the paranormal? Are they privy to things and sights beyond some invisible veil through which we cannot penetrate? Do they see things that do not belong, such as ghosts and spirits? It is certain that these animals have sharper senses of hearing and smell than we do, and may perhaps pick up on cues that we cannot, perhaps even possessing a sort of 6th sense that few of us possess. We are left to wonder what such experiences entail and just what they mean, and for pet owners, especially those who have had similar experiences, we are left to try and figure out just what, if anything, these dogs are seeing in the gloom. Be sure to share any of your own experiences with this.

Supernatural Creatures That Will Make You Sick