Dead Crows Drop From the Sky in Russian Town — Another 2020 Warning?

Dead birds in the road are never a good thing. Dead crows are worse because of the mythical connotations they bring. Dead crows in Russia in 2020 during a pandemic sets off so many warnings, it wouldn’t be surprising if people in the area just packed up and left. Welcome to Balakovo, Russia, where this week a road was mysteriously covered with dead crows and no one has given residents a reason for their scary demise. Anyone for hiding in a cave until January 1, 2021?

“Who knows what happened? The birds just fell down dead.”

Photos and videos on various Russian media sites on September 20, 2020, showed black birds on a street in Balakovo in the Saratov Region of southwestern Russia near the Volga River and the border with Kazakhstan. With the sudden occurrence and no obvious cause, various theories were spreading, including electrocution by electrical wires, fireworks (a nearby restaurant had a display), pollution, mass infection or poison, radiation from a nearby nuclear plant, two flocks colliding, a hoax (yeah, that’s sick) and others. Oddly for something of this nature, there was no mention of 5G. Fortunately (well, not for the crows), a resident reported that the mysterious mass death was localized. 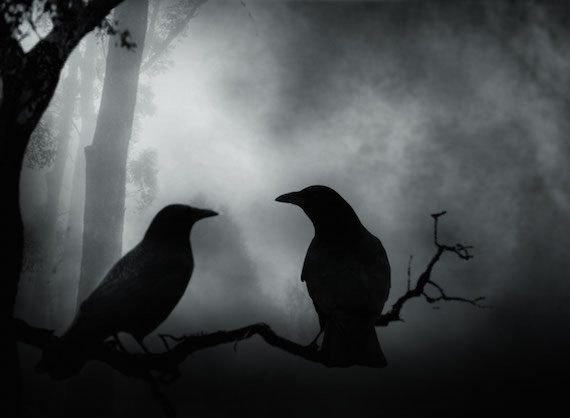 “One flock fell, or part of the flock. The radius is 50 m. There are no traces of bullets, or any other traces of violent death.”

Some of the crows were picked up and taken to a bird rescue center where ornithologists were able to examine them. A volunteer at Wise Rukh 64, gave a preliminary report to a radio station:

“As a volunteer, I connect with many other volunteers who treat birds and care for birds of mass species - crows and pigeons. This year, the mass death of pigeons, 80% mortality, has never happened. A lot of infection was due to the fact that the winter was warm, but there weren't so many sick birds for several years. The winter was very warm, because of this, birds began to nest and hatch much earlier than usual. Because of this, there are more weakened birds, weather conditions made it so that more chicks hatched."

Weak birds due to an abnormally warm winter – this sounds like the conditions caused by climate change that appears to be killing millions of migrating birds in the U.S. southwest and Mexico that were forced to leave their nests early due to Pacific coast wildfires also caused, at least partially, by climate change. Before you can say “But, but … nuke! Wires! Pollution! 5G!”, Ksenia Igoreva, another staffer at Wise Rukh 64 had this to say:

“As for the ecological situation with regard to nuclear power plants, emissions - this is all somehow silly, because it happens all the time. Pollution is constant and planned, it cannot affect the death of birds one-time. This year, almost all pigeons are sick, they do not recover in the time they should. There are a lot of birds with sick eyes. Birds in such numbers cannot die because of the electric wires, because the electric drives are always hanging, and the birds have died now, once. Due to pollution, because of the nuclear power plant, the birds could not die at once. If recently there was processing of fields and asphalt with all sorts of rubbish, then the birds could get poisoned and die."

Elena Isaeva, Deputy Head of the Crow's Nest, another local rehab center for wild birds, agreed on eliminating radiation or pollution, but wanted a more in-depth examination by a state lab before making any other assessments.

“If the matter is in the poisoning, it will be seen at the autopsy, but if the birds died from the blow, then yes, the reason may well be the fireworks, which frightened the birds that settled for the night."

Poisoning in Russia? That never happens -- well, according to a certain leader it doesn't. Is there any good news? In fact, in a twisted way, the sight of dead crows may be it. While the appearances of live crows and ravens are associated with death, doom and misfortune, many cultures believe a dead crow means the opposite – the bad times are ending and good change is coming. Well, except for the crows.

It’s 2020 – we’ll take the dead Russian crows as a tiny ray of hope for good times ahead. Just don’t get too carried away.

Sinister Sacrifice of Animals in the U.K.