Fenn Treasure Finder Finally Breaks His Silence … or Does He?

“I am the person who found Forrest’s famed treasure. The moment it happened was not the triumphant Hollywood ending some surely envisioned; it just felt like I had just survived something and was fortunate to come out the other end.”

In a revelation/explanation/confession on the website Medium.com, the man who claims to have found the infamous $2 million Fenn treasure just weeks before the man behind it – Forrest Fenn – passed away, tells a compelling, in-depth and sometimes heart-wrenching tale of his search for the elusive chest hidden in the Rocky Mountains with no clues but a poem from Forrest Fenn and the hints he gave in interviews. But … is this revelation for real?

“I figured out the location where he wished to die (and thus, where his treasure was) back in 2018, but it took me many months to figure out the exact spot.”

According to the article, the "months" included 25 days at the location before finally finding it. No, the man does not give the location, or even any hints to where it is. However, he reveals something not reported before – in addition to contacting Fenn by phone after making the discovery, they also talked on the phone in 2018 and met in person in June.

“After living inside his head for two years, meeting him in person was sensory overload. I could now analyze his words and facial expressions and tone in real time, mere feet away from me. I could ask him questions about the chase and he would actually answer them! I never got used to it, and I was still analyzing him unnecessarily when he died, unable to turn my obsession off.”

In his announcements about the find, Fenn only said that the finder was a man from “back east” who did not want his name revealed … and the finder doesn’t reveal it in the Medium article either. What he does reveal is more about the late Forrest Fenn than any interview or obituary this writer has seen. Not only does the finder give more facts about the life of Fenn before the treasure, he delivers many heartfelt descriptions of a man he calls his “friend.”

“Lost in some of the remembrances of Forrest is his generosity. Forrest used his chase not for personal profit, but supported a local independent bookseller and raised tens of thousands of dollars for cancer victims. He was a benefactor and donated artifacts from his personal collection over the years to the Buffalo Bill Center of the West in Cody, Wyoming, on whose board he served for several years.”

“Forrest wrote poignantly about his struggles with self-esteem and self-worth, and it’s probably these writings I connected to most.”

“For weeks he had wanted to fly me back to Santa Fe to spend more time with him (he even tried to convince me to move there), but circumstances out of our control made it more practical for me to come later.”

“For a man who expressed anxiety about getting Alzheimer’s, he seemed to have found the perfect deterrent to cognitive decline — talking frequently and in guarded detail about a huge, closely-held secret to a cache of gold, yet never divulging it to the thousands of interested people inquiring.”

This is definitely a side of Forrest Fenn that has not been covered, at least in the years since the treasure hunt kicked into high gear. The finder also gives a few guarded details about himself and what he will do with the treasure.

“Alas, I’m a millennial and have student loans to pay off, so it wouldn’t be prudent to continue to own the Fenn Treasure. And at the end of the day, for all our similarities, Forrest and I couldn’t be less alike when it comes to collecting. I’m the kind of person who feels burdened by possessions and most free adventuring the world out of a carry-on suitcase, so the treasure and I will have to soon part, and I will offer it for sale (minus the turquoise row bracelet returned to Forrest, of course).”

Finally, he reveals that Fenn had a final wish for “where he thought the treasure should end up” and the finder says “The first step for me will be to try to make that happen.”

As the title of this article suggests, this writer wonders whether the Medium article is truly the work of the finder of the Fenn treasure. Let’s start at the end and work backwards, highlighting the possible red flags. If Fenn had a wish for where he wanted the treasure to end up, was it to be sold for loan money as the finder says is his plan? The intimate details of the sensitive side of Fenn’s life almost seem as though they were written ahead of time in anticipation of the dry obituaries and continued attacks on the deaths caused by the treasure hunt, the controversies over Fenn’s reputed history of removing Native American remains, the skepticism that the treasure had truly been found or even hidden at all. This doesn’t sound like something a person could get in a brief phone call and a few days with a dying man. 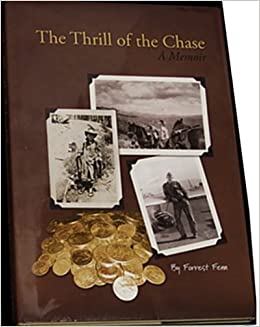 Finally, there’s the anonymity. It’s understandable that the finder would want to keep the location secret – we know how careless and destructive people can be in public parks. However, it would help if the finder were to give the interview to a journalist who could verify their existence, their statements, their logs of the hunt, etc. An anonymous article on a public blog doesn’t suffice.

This writer admired and enjoyed the depth and detail of the tale the finder weaves about his alleged finding of the Fenn treasure and the life of Forrest Fenn and recommends reading it to to draw your own conclusions. He congratulates the finder if he truly found the Fenn treasure and does not wish to disparage him … just to verify what continues to be one of the most interesting and intriguing mysteries of the 21st century.