The area of El Dorado Canyon, in the U.S. state of Nevada, has a long and colorful history. Originally home to the Paiute and Mojave tribes of Native Americans, the area gained a reputation for being a land of vast reserves of gold, which is the main reason that the Spanish conquistadors came pouring into this wild place to try and conquer it. The Spanish were not ever able to find the legendary veins of gold they had been looking for, but this would not stop people from trying well into later centuries. By the mid-1800s an influx of gold prospectors were finding their way into the region to pan the Colorado River, and with the news of gold being found the stream of prospectors increased. They would eventually hit upon the mother lode, when in 1861 a substantial vein of gold called the Salvage Vein was found in the area, and mines began to pop up left and right, including the famous Techatticup Mine, owned by California Senator George Hearst, father of publishing magnate William Randolph Hearst. It has become not only a place full of history, but also one with its fair share of paranormal phenomena, not the least of which are its supposed phantom hellhounds.

All of these miners with greedy visions of striking it rich elbowing for space on the same land were bound to cause problems, and there were. With many of these men not exactly the most outstanding of citizens, including outlaws, Civil War deserters, and other various dregs of society, it was only natural that this would become somewhat of a lawless place, a den of villainy, with gunfight disputes and casual murder common, made all the more intense by rivalries forming between Northern and Southern sympathizers during the Civil War, as well as raids carried out by Native American tribes. It got so bad that even lawmen did not come here, and the rowdy miners were more or less left to their anarchist, lawless state to kill themselves, with the only real attempts to maintain peace being the occasional intrusions of Federal troops coming in to break up particularly nasty disputes. There would eventually be a military outpost permanently stationed here, if only to protect the heavy steamboat traffic that passed along the Colorado River. Yet even in the face of all of the violence many of the prominent mines were making money hand over fist, with the Techatticup Mine alone producing more than 2.5 million dollars’ worth of gold, silver, copper, and lead by the time it closed in 1945. 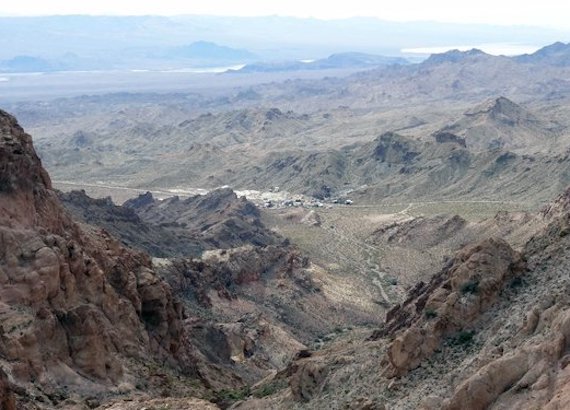 It is perhaps not surprising that with such a turbulent history of conflict and death that there should be numerous ghost stories from the canyon, but among these are the strange tales of what seem to be demonic hounds that purportedly prowl the wilds here. There have been many accounts of snarling spectral canine apparitions from here among the long abandoned mines and feral ghost towns, and these are largely said to be the spirits of the ferocious dogs miners once used to protect their claims. Back in those days everyone was stabbing each other in the back looking to move in on claims, so the miners employed highly vicious dogs to guard the mines. Many of these dogs did not fare well, either shot by trespassers or simply left abandoned to die when the miners moved on after the gold dried up, and it is thought that these animals remain as ghosts, still guarding treasure that no longer exists. One such sighting of the “Hell Hounds” comes from the Shadowlands site, from a witness who claims to have gone to the area with his brother to investigate the claims of these apparitions and would not come away disappointed. The witness says:

For many years people have come out of this canyon with tales of sightings and in a very few instances terrifying accounts of actually being attacked or chased by these alleged ghost dogs while exploring various different mining or town sites in the area. Curious as to the validity of such tales my brother and I made the decision to do a little exploring of our own. On the first few excursions we found nothing as was expected. However, on the last adventure we stumbled onto what we thought was just another anonymous shaft site. As we looked closer at the site, we noticed about an eight foot severely weathered chain embedded into the rock wall at the entrance to the shaft.

Well, curiosity got the best of the both of us and foolishly we entered the shaft. There we came upon the bones of what appeared to be those of a large dog. We decided to camp here as the day was coming slowly to its end. A decision that later we would come to regret. The still desert night closed in as we had dinner and relaxed around our small campfire. we heard what we assumed were coyotes yipping and calling off in the distance. The atmosphere became thick and very uneasy. We now felt that we were being watched from a very close distance. What we thought was the night time breeze now sounded more like the panting or breathing of large dogs in close proximity. Then we heard the growling. Grating,low......and hateful. The fall of paws on the desert sand now became apparent. They seemed to circle the campsite. We were surrounded. That's when the scratching started. It came from the area were the chain was. That damn chain moved! It seemed to tug away from the rock wall, pulling harder and harder each time! We fumbled for our gear and and stumbled to our feet. My brother shown the flashlight at the chain. There were scratch marks in the rock!

There were what appeared to be blood stains on the wall seemingly were the unfortunate dog furiously clawed at the chain's base in the rock itself! The chain dropped...something brushed against my leg and I struggled to keep my balance. My brother caught me and we ran like hell towards the car! The fall of canine footsteps and wild panting chased us all the way! I've never run faster in my life! On the road heading out of the canyon we were paced for a good two or three miles at least by what seemed to be a pack of wild strays! We made it home and I will never forget the terror of being chased by this pack of spectral hounds. 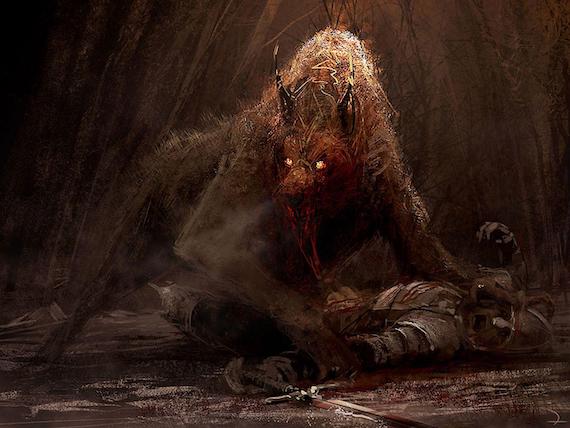 Another report of a sighting of these phantom hounds was given on the King Sasquatch Paranormal & Cryptozoology Blog. The witness in this case says:

Has any of your team members ever heard about the hell dogs of El Dorado canyon? I think I just seen one. I was with my buddies for a fun weekend at ---- setting up camp and seen a ghost dog in our camp. we spent the day on our dirt bikes and off-road trucks four wheelin til about 6. while cooking dinner my buddy Paul said he seen a coyote crouching in a defensive stance. my other friends Hellen and mike said they hadn’t seen a thing and they were next to him. after the hotdogs were done and everybody was fed and watered we started a campfire to settle down before we went to bed for that day. I’d say it was a quarter after 9 when we had all seen a big shadow of a dog on the tent wall. Hellen screamed and when she did the shadow disappeared. I came home today and looked up this animal and it says it’s called a hell dog of El Dorado canyon.

In another report from the same site, a witness was on the Colorado River and supposedly saw one of the creatures actually hunting, suggesting that it could be more than just a ghost. The report reads:

This is posted for my son. About twelve years ago my son and his wife were visiting ----- for their third honeymoon. They rented an older ---- boat and drifted along -----. Around two in the morning my house phone rang off the hook with my son fanatically shouting that he had just seen a mutant dog with a piercing howl attempting to catch a duck. He forwarded the details as a four-foot mangy dog with terrifying overlapping teeth. He said the dog failed to catch ducks and ran off hungry when they shined a flashlight onto the shore.

Was this a spirit, a phantom, a cryptid of some sort, or just a misidentification of a stray dog? We are left to ask such questions in all of these cases. Is this all purely legend, or is there something more to this all? If these hounds are real, then what are they and what do they want? Why do they continue to remain tethered to this location? Whether there is anything to it or if it is all a spooky legend, the hellhounds of El Dorado Canyon add a layer of weirdness to this historic place.