While the United States struggles to legalize marijuana for medicinal purposes, let alone for recreation, and keeps LSD illegal despite growing medical acceptance of it as a treatment for addictions and PTSD, its neighbor to the north has moved on to the next big thing in ancient-hallucinogens-turned -modern therapies – ayahuasca. The country’s governmental health department recently granted the sixth federal exemption to a church to allow the import of ayahuasca to use in religious ceremonies. Can I hear an “Amen … eh?”

“The mission of Céu do Montreal is to uphold the central tenets of the Santo Daime. The intent of Ceu do Montreal is to provide for transformation and evolution of all persons seeking enlightenment in communion with Divine Creator Consciousness through the use of the entheogen Santo Daime in the rituals known as Works. The rituals are called “Works” because through them we believe Initiates have the conscious responsibility for correcting personal flaws and transforming themselves during the spiritual services.” 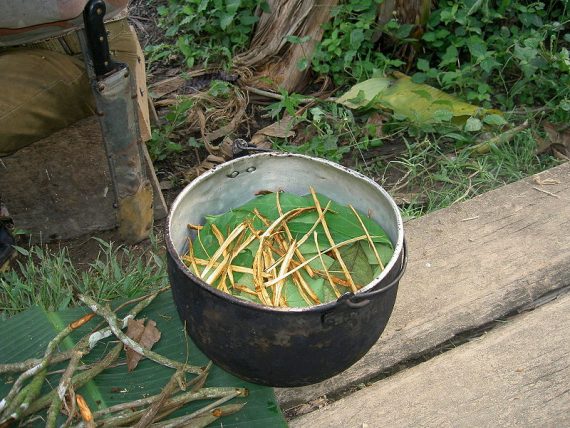 Céu do Montreal was one of the first two Canadian churches to receive an exemption from Health Canada to use ayahuasca, which the church calls Santo Daime sacrament, in religious practices. That means it and five other Canadian churches, with the addition of the latest one in Winnipeg, can import ayahuasca from Brazil and other countries where the use of the DMT-containing drug is legal. VICE interviewed Health Canada spokesperson Maryse Durette about the new exemption for Céu do Winnipeg and she said it was issued after a “comprehensive assessment” that ensures the “risk of diversion and any other health risks” is minimized. That includes current COVID-19 restrictions which have temporarily stopped the churches from practicing the Santo Daime ceremonies.

“The more we talk about psychedelic medicine, the more we reframe psychedelics into popular culture, the more popular it becomes. And that changes public opinion, and eventually it becomes relatively less painful for politicians to support it.”

In his comments to VICE, Mark Haden, Chair of the Board of MAPS (Multidisciplinary Association for Psychedelic Studies) Canada, told VICE News how the Canadian public is moving towards acceptance of ayahuasca through these exemptions to churches. Once that happens, its benefits in the medical field will also become more accessible.

However (there’s always a ‘however’), this doesn’t mean Americans can rush to Montreal or Winnipeg to attend a church service and try ayahuasca or the Santo Daime sacrament. As Céu do Montréal explains in its Mission Statement:

“Membership in the Santo Daime is gained only upon the serious request of the participant.”

Could Santo Daime churches open in the U.S. and get exemptions allowing the use of ayahuasca? While the answer to the second half of the question is “highly doubtful,” Santo Daime churches without the Santo Daime might still be attractive and helpful to Americans seeking a new religion or philosophy. Again, from the Céu do Montréal Mission Statement:

All that plus no vomiting – sounds like a fair trade-off to get the ball rolling in the U.S. for the acceptance of ayahuasca, DMT and other psychedelics for the benefits they can provide to those suffering from addictions, PTSD and other illnesses that have been proven to respond to them.

Then again, we’re talking about the U.S., not Canada … eh?

UFOs: The Origins of an Investigation, Part 2