The giant hairy hominid called Bigfoot, or Sasquatch, has been around for a long time, and has materialized in reports from the most far-flung corners of the United States and beyond. Every state of the union has had reports of something like this lurking in their wildernesses, yes, including Hawaii, and it is enough to seriously give one pause as to just what is going on here. One state that might be far from the first that one might conjure up in one's mind when asked to think about Bigfoot encounters is the state of Ohio, yet here we find a rich history of hairy apeman reports that have remained unexplained to this day.

Probably the most well-known Bigfoot-like beast of Ohio is what has come to be called the Grassman, which also goes by various other names such as the “Minerva Monster.” Hulking hairy hominids have been seen in Ohio, mostly along the Ohio River, since the early 1800s, but the phenomenon didn’t really enter the public consciousness until 1978, when there would be a series of bizarre sightings in the small town of Minerva, Ohio. In August of that year, an Evelyn and Howe Cayton were relaxing in their home when their grandchildren came running in from outside in quite an upset state. They were crying and screaming about a huge, hairy beast that had been lurking about outside near a gravel pit, and when the Caytons went outside to see what was going on they saw it too. According to them it stood about 7ft tall, weighed perhaps 300 pounds, and was covered in dark brown hair, posing a very intimidating presence that made them immediately back off. 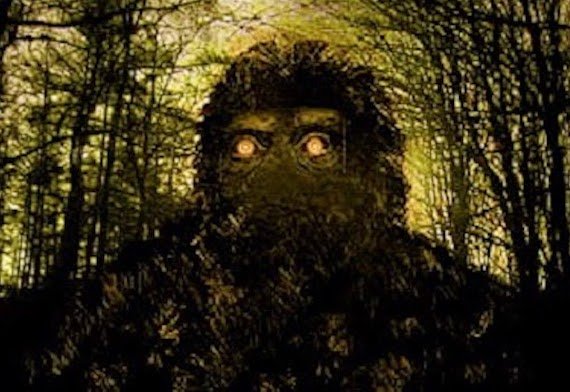 Over the coming days, the Caytons would see the creature lurking about the rural property on several occasions, and once even saw two of the things on a nearby hill. They became convinced that the creatures had killed their pet German Sheppard, which was found with a broken neck out in the trees at around the same time, and there was a sense of dread permeating the scene. Some of the encounters with the weird beast were very unsettling indeed, as it purportedly had the habit of peering into their windows at night, pounding on the walls, and even throwing stones at the house with great force. In the meantime, there were many other reports coming in from across the general area of the same thing over the next several weeks. From a heavily wooded area in Paris Township, just two miles west of Minerva, came around a dozen reports of a massive, hairy bipedal creature roaming about, and hunters began to fan out through the area in an effort to hunt it down. Farmers also reported seeing it walking through tall grass on their properties, and one report even described the beast as sitting on top of a chicken coop. Motorists also sometimes encountered the creature crossing the road, and in one case the monster ran towards the witnesses’ car in a threatening manner. The creature was often heard as well, it’s wail described as sounding like a combination of a baby crying and a woman screaming.

Another Ohio beast in a similar vein is the legend of what has come to be called “Orange Eyes,” from the wilds of the area of Charles Mill Reservoir outside of Mansfield, Ohio. Beginning from the 1960s, numerous witnesses came forth with mind-boggling tales of encountering a beastly, enormous creature estimated as up to 11 feet tall, covered with filthy matted hair, exuding an odiferous stench, and possessing two large glowing orange eyes. The bizarre creature was most often said to roam about an area called Ruggles Road, which was a popular make-out place for young couples and also had the nickname Lover’s Lane.

The monstrosity was known to terrorize those who came here, looming over vehicles menacingly, banging on the windows, or even rocking cars to the point that they threatened to tip over. One of the most spectacular reports of Orange Eyes comes from April of 1968, when a group of school kids spotted the creature roaming around and actually chased it with flashlights in hand, but it disappeared into the night. The story goes that this abomination spewed forth from the tunnels underneath Cleveland’s Riverside cemetery, driven out when its home was destroyed by construction work carried out there in the 1940s. Interestingly, the area of Charles Mill Lake has another cryptid that may or may not be related, in the form of an aquatic humanoid with no arms, luminous glowing eyes, and enormous webbed feet, which surged out from the water of the lake to frighten witnesses Denny Patterson, Wayne Armstrong and Michael Lane in March of 1959. Authorities would later uncover “tracks that resembled the footgear worn by skin divers,” but the case has never been solved and there is no reliable connection to the Orange Eyes phenomenon. What it was or where it came from is anyone’s guess. 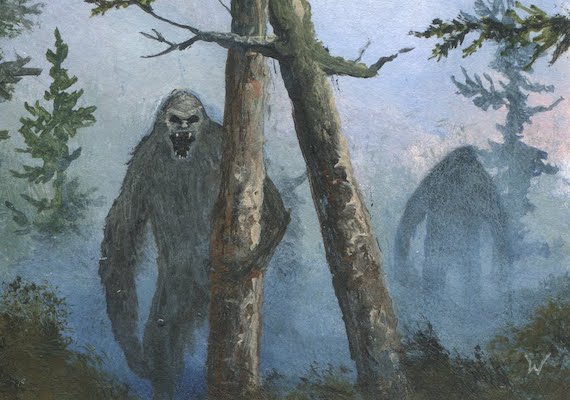 Another creature that may or may not be related to these sightings we have looked at so far has come to be known as the Cedar Bog Monster, and was reported from the thick wilderness of the Cedar Bog Nature Preserve, near Urbana, Ohio, which was established in 1942 and is widely touted as Ohio’s first nature preserve. Not long after the preserve opened, people wandering its trails or the road that cuts through began coming back with strange stories of a bizarre, apelike creature with glowing red eyes within the dim woods. One very prominent story from the era is that in 1945 a group of teenagers went camping in the Cedar Bog Reserve and disappeared without a trace, which of course was blamed on the monster, and rather eerily not long after this the entire area was fenced off and closed to the outside world, either to keep trespassers out or whatever lived there in. What are these creatures prowling the wilderness of Ohio? Are they Bigfoot or some subspecies of it? Are they just tall tales and urban legend? The answers are not clear, but sightings reports such as these have ingrained themselves into the landscape of Ohio, and present a compelling mystery that may, or may not, ever be solved.