Back in 2014, a man was found buried face down in a German cemetery. Prospectors discovered the oddly-buried man in a cemetery that contained 340 individuals but he was the only one who was facing downwards.

Buried with the man were several items, including a dagger and some coins, which indicated that he had died between the years 1630 and 1650. It was unclear as to why he had been buried face down, but new research may offer an explanation. Those who buried the individual may have put him face down to prevent him from coming back as a zombie.

A team looked at numerous records and noticed that several people in the past 900 years have been buried face down – specifically in Central European countries like Germany, Switzerland, and Austria. It is believed that they were buried in that manner as an act of humility towards God. 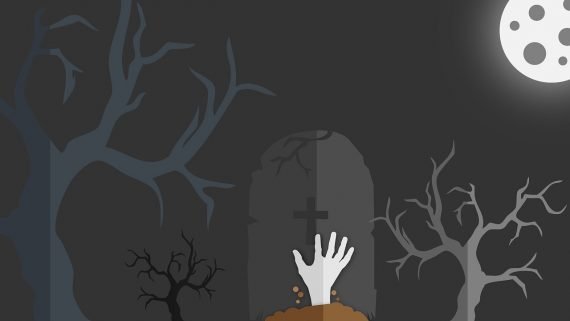 The researchers noticed that prior to the 13th century, the dead were thought to be friendly spirits, however, after that time period, they found stories of nachzehrer which is a type of vampire in Germany folklore that eats its burial shroud as well as its human body so that it can survive after death. Additionally, it feasts on the bodies of living humans – much like a zombie would.

That time period is actually quite significant since that was around the time when the plague spread across Europe and killed almost half of the population. The plague (also known as Black Death) arrived in Europe in October of 1347 and within five years it would kill over 20 million people (nearly a third of the entire European population).

Symptoms of the plague included swelling in the groin area or underneath the armpits, followed by pus and blood seeping out of the enlarged areas. The infected individual would then experience chills, fever, diarrhea, vomiting, and body aches. Those living at that time believed that it was God punishing them.

The fear of the pandemic caused a lot of paranoia among those living in infected areas. “There was a theory that someone would become a nachzehrer if they were the first to die in the community during a pandemic,” the researchers claimed. Additionally, since the plague was very contagious, family members who attended funerals often died themselves after becoming infected and since very little information was known at that time, it was believed that they were being punished; therefore, the stories of “evil spirits” and zombies/nachzehrer began circulating.

Matthias Toplak, who is an archaeologist at the University of Tübingen in Germany but who was not involved in the study, told National Geographic, “This transformation into evil spirits takes place around the year 1300 or 1400,” adding, “It stands to reason that people would blame supernatural spirits and take action to prevent the dead from returning.”

The new study was published in the journal PLOS One and can be read in full here.