Texas has taken over the Chupacabra from Puerto Rico, even though what is referred to as the ‘goat sucker’ in the Lone Star State usually looks more like a sickly dog or hairless coyote with mange. Nonetheless, this love affair with the cryptid just got a legitimate exhibit at the San Antonio Zoo, when kids and adults can learn all about the mysterious creature. Do they have a baby one in the petting zoo?

“Chupacabra! San Antonio Zoo is thrilled to host a grand opening for a new species that has never before been featured at a zoological facility, the Chupacabra. The Chupacabra is a legendary creature in local folklore. The name comes from the animal’s reported habit of attacking and drinking the blood of livestock, especially goats. Chupacabra can be translated as “goat-sucker” from Chupa (to suck), and Cabra (goat). According to biologists and wildlife  management officials, the Chupacabra was an urban legend…or is it?” 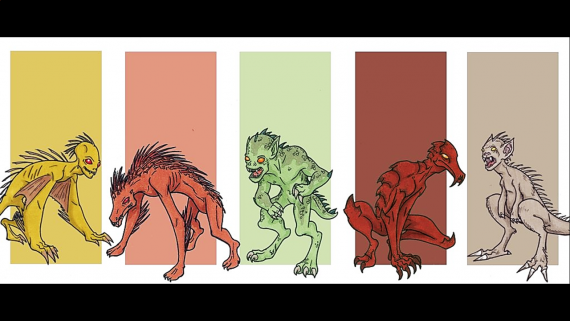 The press release announcing the San Antonio Zoo’s new fall and Halloween features includes the new Chupacabra exhibit, although technically the creature is not associated with fall nor Halloween. Nor has it technically “never before been featured at a zoological facility” – the same San Antonio Zoo announced an exhibit on April 1, 2016, which was revealed to be a prank on April 2nd. This time it’s legitimate – at least according to Tim Morrow, President & CEO San Antonio Zoo.

“This new one of a kind habitat is sure to spark both the imagination of what wildlife exists that we haven’t yet discovered and the desire to conserve species, both known and unknown.”

Habitat? Will there be a chicken coop filled with feathers and blood? A goat pen filled with fur and blood? A pasture filled with cowhide and … you get the idea. Perhaps instead the “habitat” will be more Texas Chupacabra. Will it be a suburban neighborhood with garbage cans knocked over? A chemical plant with garbage cans knocked over? A prairie with a sick-looking dog? Perhaps this IS an appropriate exhibition for Halloween.

“At the grand opening of the Chupacabra habitat, our culinary team will be on hand featuring a new drink called “The Goat Sucker,” the drink will feature a set of plastic Chupacabra teeth and will come in both adult cocktail and kid-friendly mocktail versions.”

Never let the thought of a revered and beloved 106-year-old zoological garden known for breeding a number of endangered species including black rhino, golden lion tamarin, dama gazelle, Attwater's prairie chicken, black mangabey, and Caribbean flamingos get in the way of selling burgers, medals and plastic fangs commemorating a cryptid. (Those prairie chickens and flamingoes better be on alert.) Sure, everybody is hurting during these pandemic times, but is this the best way to deal with them? Will this exhibit inspire other zoos to create exhibits showcasing their own legendary cryptids? Champ in New York? Fouke Monster in Arkansas? Altamaha-ha in Georgia? Frogmen in Ohio? Bigfoot … everywhere?

UFOs: The Origins of an Investigation, Part 3