Sinister Sacrifice of Animals in the U.K.

Now and again (and thankfully it's rare) cases of what I call sinister sacrifice surface in the U.K. It is, to say the least, a disturbing situation. With that said, here are a few examples. In October 2005, farmer Daniel Alford of Sampford Spiney, near Tavistock, Devon, England, made a shocking discovery on the wilds of Dartmoor: namely, six sheep, horrifically slaughtered, with their eyeballs removed and their necks viciously broken. More sinister is the fact that the corpses of the animals had been deliberately laid out, in what was perceived to be a Pagan symbol, near a series of ancient standing-stones. Alford was convinced this was the dark and horrific work of occultists. Primarily because this was not the first occasion upon which he had made such a gruesome find. In January 2005, Alford had stumbled upon five sheep, killed in a similar fashion and spread out in a circle, only half a mile away. Interestingly, on both occasions the animal attacks had occurred at the height of a full moon. 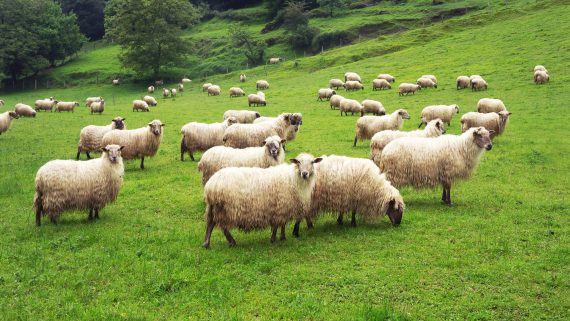 In the following year, 2006, yet more unsettling sacrifices of sheep on Dartmoor occurred, again near Tavistock, and specifically on moorland at a location called Pork Hill. Once again, the necks of the animals had been broken, and their eyes had been removed, and taken. This time, however, there was another disturbing development; the tongues of the animals had also been removed. RSPCA Inspector Becky Wadey commented: "These sheep must have been rounded up on the open moor by whoever carried out this barbaric attack. That would have required a number of people and potentially been quite a spectacle. The bodies were found on open, exposed ground very close to the road, so somebody must have seen something, even if they did not realize at the time that it was suspicious." The atrocities were never solved. Moving on, there's the strange story of Rob Lea, a man I met in 2000.

Matters all began, said Rob, in late August 1989, when his father rose early one morning to the unforgettable sight of five of his sheep, all dead, and laying in a rough circle in a field that sat directly behind the family’s home -in Newport, England. All of the animals had been slaughtered: their throats had been carefully cut by what bore all the hallmarks of being a sharp instrument, and several of their major, internal organs had been piled high, in a bloody mountainous mess, in the middle of the circle. Not without significant justification, thoughts of devil-worship, satanic sacrifice, and occult activities overwhelmed the frantic mind of Rob’s father. Unsurprisingly, the family quickly telephoned the local police, who were on the scene with very surprising speed. An official report was filed, amid an urging from the two officers who attended that the Lea family should refrain from giving the incident any publicity – and under any circumstances.

Another such story came from Frank Gibbons, who, while out walking his Labrador dog one day in 1998, found the remains of five fully-grown foxes laid out in a circle on a patch of grassy ground near the village of Brocton, England with the remains of a large, thick candle lying about six or seven feet from the dead bodies. Having no wish at all to get involved in what might very well have turned into a complicated and lengthy police investigation, Frank quickly grabbed his dog, walked away at a steady pace without once looking back, and opted not to report his macabre discovery at an official level - hence the reason why his story is a brief one.

I spent many fun summers in the late 1980s and early 1990s driving around the county of Wiltshire in search of Crop Circles - and, on more than several occasions. But, it's one particular case from 2006 that is worth noting. It was in the summer of that year that a significant number of peacock feathers were found in a field next to Chartley Castle, Staffordshire. Jane Adams is a devotee of Wicca who I first met in a Wiltshire Crop Circle back in August 1997. She has an intriguing theory to account for the presence of those out of place feathers. She is of the opinion that the presence of the feathers at Chartley Castle is evidence that the people she believes are guilty of making the formations in the crops use the peacock’s "Evil Eye" in what she describes as "black ceremonies."

It should be noted that these incidents have nothing to do with some of the weirder animal mutilations that have been reported in the United States and that became of interest to the FBI in the mid-to-late 1970s. In those U.S. cases, black helicopters, laser-like technology, and elevated radiation levels were all reported in the American incidents. In the U.K. cases, however, the culprits are sick, deranged nutjobs who need to spend significant time behind bars. With that all said, part-2 of this article will focus on the even more controversial issue of alleged human sacrifice in the U.K.