“To infinity … and beyond!”

The U.S. Space Force – the first military service branch tasked with operations in the space domain – has deployed its first Space Force airmen (that’s what they’re called, even if they’re female – at least until the Space Force switches over to Navy rankings) on their first mission. Where will they be stationed? Infinity? The International Space Station? Cape Canaveral? Area 51? A secret base testing secret anti-Tic-Tac-UFO aircraft?

“While a sunset would usually have signaled the end of just another day at Al Udeid Air Base, Qatar, for 20 military members the golden hour glow seemed to symbolize the promise of a new beginning. Enlisted and commissioned Airmen assigned to the 16th Expeditionary Space Control Flight and the 609th Air Operations Center joined the U.S. Space Force during enlistment and oath of office ceremonies at the Silent Sentry compound Sept. 1, 2020.”

That’s right – the first deployment of the Space Force is to Qatar. The twenty officers and Airmen in core space career fields such as space operations and space systems operations were formerly members of Space Operations. Now, as U.S. Air Force Col. Todd Benson, director of Space Forces for U.S. Air Forces Central Command, said in the press release, they are “joining our nation's newest service.”

We hear you. Let’s see if we can figure out why. Al Udeid Air Base did not exist until Operation Desert Storm, the Gulf War in 1991 between coalition forces and Iraq. Sensing a need for a base in the Gulf, Qatar secretly built Al Udeid Air Base in 1996 at the cost of more than $1 billion. It was first used by the U.S. in 2001 by the U.S. to prepare for operations in Afghanistan and eventually in Iraq and Syria. Al Udeid now serves as logistics, command, and basing hubs for the U.S. Central Command (CENTCOM) area of operations.

Well, that’s about it. No invasion has been announced. Al Udeid Air Base is probably the most modern based used by the U.S. military and it was once secret, so it could still have some new secret operations for the Space Force. It most likely has had more Air Force operations than any other base, so its pilots have had the most opportunities to encounter UFOs/UAPs. This seems like a good place for Space Force to be … especially since their uniforms are already desert camouflage. 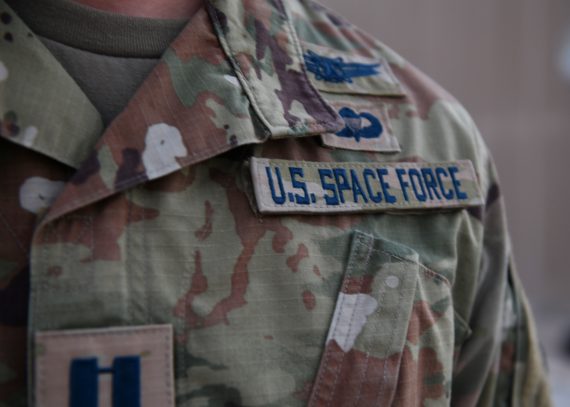 Not blue? Or something stolen from Star Trek?

Nope ... camo. The ‘official’ reasons are to save money (not a good sign) and that the Space Force is a ground force supporting ground personnel. That’s disappointing to the Trek-loving public and not really great for recruiting future Space Force members.

What would Buzz Lightyear think?

The Mysterious Mud Mermaids of Indiana