The Mysterious Drummer of Cortachy Castle

Hauntings happen all over the place, and some of the most infamous and spookiest come to us from old, historic places surrounded by creepy legends. Our tale here revolves around a place called Cortachy Castle, which is a castellated mansion House at Cortachy, Angus, in Scotland. Originally built in the 15th century, it is perhaps most-well known for being the seat of the historical Ogilvy Clan, who were the first Earls of Angus after Scotland became a unified country. It is said that they gained much favor with William the Lion, who was King of Scots from 1165 to 1214, the second-longest reign in Scottish history before the Act of Union with England in 1707, when members of the clan saved him from an ambush while his enemies while out hunting. William the Lion then had gifted them large tracts of land out of gratitude, as well as appointing them to various affluent titles. The Ogilvy Clan gained much power and influence over the centuries, accruing ever more wealth and territory, and one of these locations they acquired was the stately Cortachy Castle, which besides its history also holds a strange and infamous haunting.

According to the story, there was a drummer who got on the wrong side of the clan, and depending on the version the reason for incurring their wrath varies. In one version the drummer worked for the rival Carlisle family and was caught in a romantic liaison with the Earl's wife, the Countess of Airlie. In another he is said to have been a drummer for a hated chieftain, and that he angered the Ogilvy Clan with an unpleasant message. In yet another permutation of the tale he was a drummer for the Ogilvies, but gained their scorn when he failed to warn them of an impending attack from one of their many powerful enemies. Whatever version you choose, the end is the same, though, in that he was executed by the clan by being locked into his own huge drum and thrown from the highest tower of the castle. This doesn’t seem to have gotten rid of the drummer though, because he seems to have stuck around in a sense.

Over the next centuries there began to be noticed a macabre trend that seemed to follow the Ogilvy Clan around. It seemed that every death in the family was preceded by the eerie, ghostly beating of a drum coming from seemingly everywhere and nowhere at once. Whenever this thumping potent was heard, one of the Olgivies would soon after die of some accident or malady. It would get to the point that hearing the drums reverberate through the castle walls would send the family into a panic, as it was never clear exactly who would die next or how, the only thing they knew was that one of them was doomed. The drummer famously acted as an omen for many deaths in the family, including those of the first Lady Airlie and later even the 14th Earl of Airlie in the 19th century, but perhaps the most famous story related to the drummer happened in 1844. On Christmas of that year, a guest by the name of Miss Dalrymple was visiting the castle and asked the family what the insistent drumming she heard every night meant, thinking it was played by human hands for some ceremonial reason. As soon as she asked this, the family allegedly became somber and spooked, explaining to her that this drumming meant one of them was going to die. That night the drummer returned, which was enough to send the guest packing, and not long after the current Lady Airlie at the time was found dead, apparently leaving a note scrawled on a piece of paper stating that she had known the drummer was coming for her. 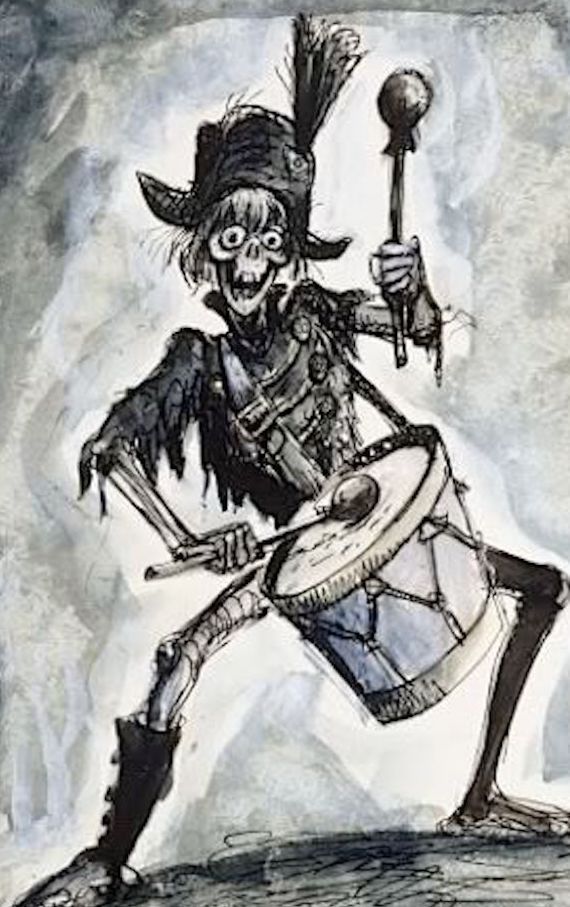 In 1849 there is another popular tale concerning the drummer. In August of that year, an Englishman and the next heir to the Earldom of Airlie was visiting the castle as a guest of Lord Ogilvy. On his first evening there he heard the low pounding of drums and asked others in the castle where it had come from but no one else seemed to have heard it. The drumming continued night after night, and he soon learned that the 9th Early of Airlie had been struck severely ill, and indeed would die the following day. The curse of the drummer would continue up to 1900, with the Earl who had been in place during the Boer War, after which the mysterious drummer seems to have gone quiet for good.

What was going on with the Drummer of Cortachy Castle? Was this a ghost, poltergeist, demonic entity, or merely a legend? Did it cause the deaths or merely warn of them? Why did it stop? One thing that is sure is that to hear those ghostly drums and wait for the next one to die would have been a very scary positions to be in, and it is a curious local paranormal phenomenon that has managed to stand the test of time.

Human Sacrifice in the U.K.?