The Mysterious Mud Mermaids of Indiana

When one thinks of mermaids they probably think of the vast expanses of the ocean and mysterious realms out past the horizons over the water. Mermaids have traditionally been seen as creatures of the sea, and whether they are real or not, it seems that most people can agree that at the very least they are denizens of the ocean along with the likes of the Kraken and sea serpents. However, this does not always seem to be the case, and in the 1800s there were apparently sightings of mermaids in perhaps one of the last places anyone would ever expect to find such entities.

The setting for this truly outlandish tale is the area near Vevay, in the U.S. state of Indiana. It is a state that has no coastline and would not typically be the first place to jump to mind when discussing sea monsters, yet beginning in 1891 this would supposedly change. There came to be several sightings of something lurking along the muddy shores and sandbars of the Ohio River that seemed to be some sort of grotesque, twisted version of the mermaids of legend. Apparently two of the creatures were spotted in the area, frolicking in the water and lounging about on submerged tree stumps, and were said to feed on fish and mussels. They were described as vaguely humanoid in appearance, amphibious and completely hairless, and with webbed hands, sharp claws, fins, pointed ears, and jagged teeth. A description in the Cincinnati Enquirer would say:

The beast is about five feet in length…Its general color is yellowish. The body between the four legs resembles that of a human being. Back of the hind legs it tapers to a point…The extremities resemble hands and are webbed and furnished with sharp claws…it is devoid of hair…Its ears are sharp-pointed and stand up like those of a dog. 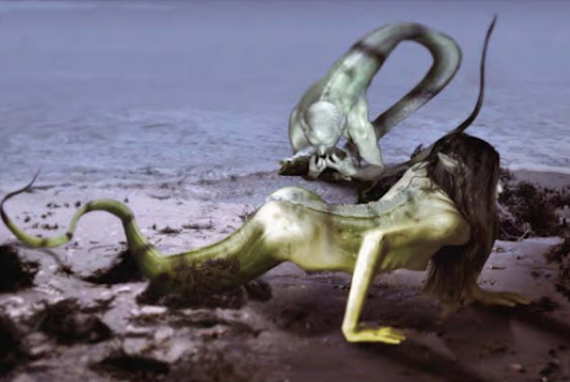 One of the witnesses, a Kentuckian Confederate captain, J.M. Ozier, would even provide a sketch of the creatures, and would claim that they were predatory and quite aggressive. Ozier would claim that the pair of creatures were a male and female, and that he had seen and been menaced by the male. Soon the newspapers were calling these creatures the “Mud Mermaids,” and another news report at the time would read in its entirety:

On the sand bar of the Ohio River Vevay, Indiana, reside two nondescript creatures horrible in appearance and habit. They are amphibious in nature and resemble in appearance huge lizards with human features. When partly submerged in the yellow waters of the Ohio, they are strangely like human beings. Of what species of animal they are no one knows, for it is impossible to get near enough to them to judge correctly. The sand bar in question is at low tide covered with huge logs and stumps of trees, known in the river vernacularly as snags. They have been deposited by the government snag boats engaged in keeping the channel clear. When the water is high enough to cover these snags, the creatures make their home among them. When the water recedes, they disappear into some unknown lair and wait for a rise.

From indications they appear to be carnivorous. Among the snags are to be found wagon loads of mussel shells, fish bones, and other debris of animals. When the river goes down, these shells and other articles disappear only to be succeeded by a fresh lot. This is evidence to those who have watched the coming and going of the strange things that they live upon such food. 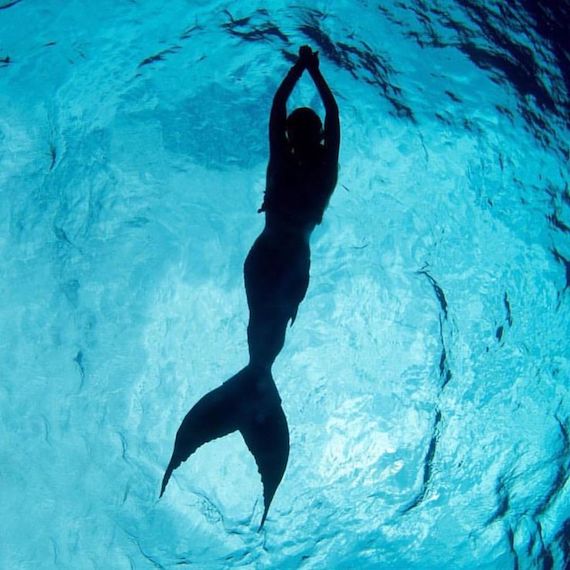 It is all very curious, indeed, but frustratingly the reports of these fantastical monsters just sort of end and there is no more mention of them. Neither is there any mention of accounts of such a creature in the Ohio River before 1891, and so we are left to wonder what is going on here. Considering that the sightings all happened within a very short period of time, with no prior accounts and none after, there is the possibility that these were some sort of creatures that somehow managed to get up the river from the sea, briefly seen in this place before moving on in their quest to get home. It might also have been just a misidentification of some other wildlife. There is the distinct possibility that it also might have been merely a sensational fake news piece, which were common to the era on slow news days. Whatever the case may be, the idea of Mud Mermaids in Indiana is too good to pass up, and it is an interesting little historical oddity all the same.