The Mysterious Wolfman of Maryland

Among the many reports of various hairy wildmen reported throughout the world, some of the strangest are those that seem to point to some sort of "Dogman" or werewolf type beast. Such stories and lore are plentiful from a range of disparate locations. One place that has long had its lore and strange sightings of a werewolf-like creature is that U.S. state of Maryland, where a half-man, half-wolf apparition is said to roam.

Tales of some sort of hairy, bipedal wolfman stalking the wilds of Maryland go back to the times of the first Pennsylvania Dutch settlers to the area in the 18th century, who often called the beast the Hexenwolf and believed that it hunted their livestock. It was often linked to another creature of the local lore called the Snallygaster, said to be a flying reptile that drinks blood, and indeed the wolfman and Snallygaster were said to be mortal enemies. So far it sounds like pure folklore and fantasy, but that would change in 1944, when it was reported that a hulking, hairy creature with canine features and a bushy tail was seen in the forests of West Middleton, Frederick County, and residents of the area frequently complained of hearing shrill howls in the night and of finding strange footprints on their property. However, the creature would go on to fully propel into the public consciousness when a compelling report hit the news in 1965, which seems to have made the Maryland Wolfman more real. In November of 1965, a local man by the name of John Becker called a local newspaper and claimed to have heard a strange noise in the backyard of his rural property. Thinking it was some wild animal he went out to investigate, and what he would find was far stranger than anything he had ever expected to see out there in the murky dark. An article in the Fredrick News Post would say of the encounter:

Near the woods of Gambrill State Park, John Becker went out in his yard to investigate a strange noise. It was getting dark, and he had started back to the house, when he saw something moving toward him. It was as big as a bear, had long black hair, a bushy tail, and growled like a wolf or a dog in anger. As it got closer, it stood up on its hind legs and attacked him. Becker fought the creature until it ran into the woods, leaving him, his wife and children in horror. Deciding to remain anonymous under the alias John Becker, he filed a report with local state police, telling of an attack by a mysterious monster that he called a Dwayyo. 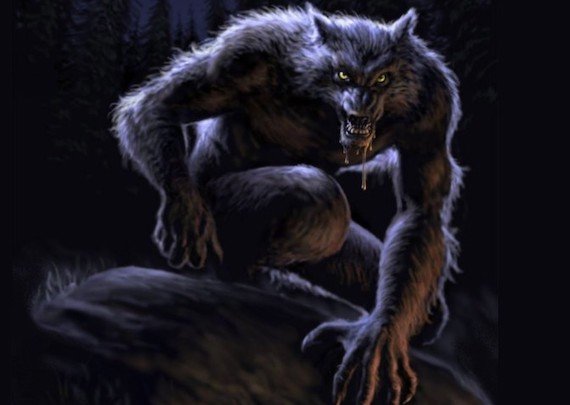 It is all certainly pretty sensational, and it was met with much skepticism at the time, especially considering police who went out to the property where Becker supposedly lived found nothing, not even the rural road that Becker claimed to live on, leading them to think it was a prank. However, as soon as it hit the news other people began reporting having come across the same thing prowling about in the shadows. A witness in Jefferson claimed to have seen "a dog-shaped animal about the size of a calf” marauding about chasing some cows on her farm and several hunters saw the thing too. One hunter would say of his own experience:

My dogs started chasing something, and I saw it was black, but I didn’t think too much of it, believing it was a dog maybe even a bear. However, after reading the newspaper article, I’m not too sure it wasn’t a Dwayyo. It trotted something like a horse. I don’t know what it was, but I’m looking for it this week.

In the summer of the following year there was a remarkable report from the rugged area of Gamrill State Park, where a camper claimed to have witnessed a “a shaggy two legged creature the size of a deer that had a triangle shaped head with pointed ears and chin, which issued a horrific scream before running off into the night. Another report given to the site Phantoms and Monsters also seems to have come from around the same time, from a witness who says that he was around 11 years old at the time. He says that at the time he had been staying with his grandmother on her rural property, and one evening he had gone out into the pitch-black outside to use the nearby outhouse. He didn’t bring a flashlight because he knew the way well and the moon was bright that night, and he says of what happened next:

I made it down to the outhouse and don't even remember hearing the usual night noises like crickets or owls, it seemed almost too quiet. I was a sharp and smart kid with a great imagination, but not enough to make this story up. I felt an uncanny sensation of being watched and I started to get scared. I left the outhouse, peeked outside first, and for some reason I wanted to run back to the house, getting to safety as quickly as possible. It was a rough and long run and I tired quickly and began walking the last few hundred feet to the porch of the house. Something told me to look back where I had been...to this day I wished I hadn't.

What I saw was an impossible sight. This animal stepping through the backyard of Grandma's property, just past the garden about ten feet past the outhouse. It was this upright furry creature with a dog-wolf head! I have owned German Shepherds from the age of 7 so the head was almost similar to the ears and snoot of a German Shepherd dog. I stopped dead in my tracks, not believing my eyes because it was impossible! It had arms that had claw-like hands that hung out in front of it. As it turned its head and looked right at me, the eyes looked yellow and super reflective. Chills shot up my spine as it quickly walked on two legs (that looked like real dog legs bending backwards) traveling from left to right, past her garden, into the old, gravel lane, then across into the thicket of the woods where it disappeared. I heard the rustling through the weeds. It may have initially traveled from the usually full cow pasture that was up an incline, past the spring, and up to the cow pasture that was behind Grandmas house. I shudder to think it was hiding behind the outhouse I was in, but that is a distinct possibility as well! 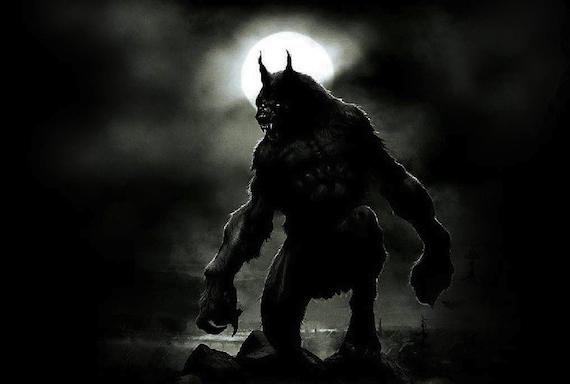 In every case the Dwayyo has always been described as looking like a wolf or an Irish wolfhound on its hind legs. Others claimed that they had heard the beast at night, with one local claiming that “It cried like a baby and then screamed like a woman for months.” Still other reports were a little more bizarre, such as one local who called police to tell them that she had actually captured the wolfman in her basement, yet when the police arrived there was no sign of it. So many reports were coming in that locals even organized a Dwayyo hunt, but almost no one showed up, so it was cancelled.

Reports would mostly then fall off, but they did occur sporadically. In 1976, there was another alleged sighting that occurred in Fredrick County, near Thurmont, between Cunningham Falls State Park and Catoctin Mountain National Park. On this evening, two men were driving down a dark private road through the woods when their headlights caught something they would never forget. The report was featured in the book The Michigan Dogman: Werewolves and Other Unknown Canines Across the U.S.A., in which the witness says:

It was at least 6 ft tall but inclined forward since it was moving quickly. Its head was fairly large and similar to the profile of a wolf. The body was covered in brown or brindle colored fur but the lower half had a striped pattern of noticeable darker and lighter banding. The forelegs (or arms) were slimmer and held out in front as it moved. The back legs were very muscled and thick similar to perhaps a kangaroo. This was not a hominid type creature; it did not have the characteristics of an ape. It was much more similar to a wolf or ferocious dog however it was definitely moving upright and appeared to be adapted for that type of mobility. I was particularly impressed by the size and strength of the back legs, the stripes on the lower half of the body and the canine-wolf-like head. 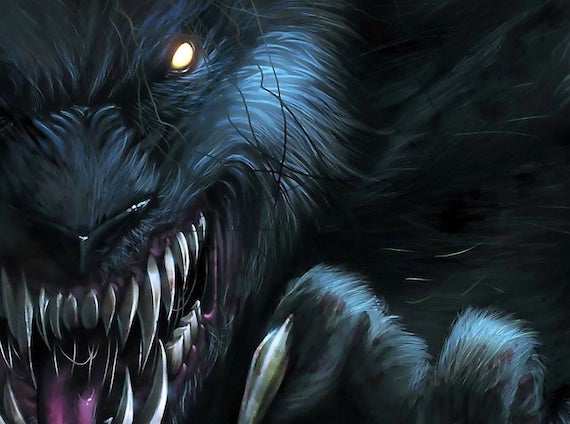 In 1978 two park rangers would report seeing a large, canine looking beast running along on two legs, and in as recently as 2009 a woman claimed that a “a huge dog-like animal on two legs” had chased her car as she was driving on Coxey Brown Road near Myersville, Maryland. She would claim that it had actually leapt and grabbed at her vehicle before she was able to outrun it and it gave up to lope off into the night. We are left to wonder what this creature could possibly be. Is it some sort of Bigfoot, a real werewolf, some sort of interdimensional being, or merely lore and legend? Whatever the case may be, the Dwayyo has remained firmly lodged within the lore of rural Maryland, and a curious case indeed.