The Mystery of the Bighorn Medicine Wheel

The ancient people of our planet left behind much that has confused and baffled us well into the modern era. These long lost people have often left behind half glimpsed peeks into their lives, and at other times have remained firmly in the shadows, and the ancients have often proven to be inscrutable entities, indeed. One such mysterious place lies within the wilds of the U.S., and has attracted a great amount of attention, speculation, and debate.

Located in the Bighorn National Forest, in the U.S. state of Wyoming is Medicine Mountain, which soars up 10,000 feet above the pristine, rugged landscape and is a part of the Big Horn Mountains range, east of Lovell, Wyoming. This has long been a scared place for various Native peoples from all over the region, including the Arapaho, Bannock, Blackfoot, Cheyenne, Crow, Kootenai-Salish, Lakota Sioux, Plains Cree, and Shoshone, who treated it as a spiritual realm and approached the mountain with great reverence, and there is a rich tradition of important archeological history to be found here. One very curious piece of mysterious history lies near the peak of this majestic, sacred place of lore, ceremony, and vision quests, where there lies a vast flat bedrock of limestone with a rather enigmatic structure upon it that has never been fully explained.

Here upon this forlorn limestone plateau is a circular structure measuring roughly 80 feet across and in a shape somewhat resembling a wheel, with 28 spokes of stone emanating from a central, ring-shaped cairn that itself is 12 feet in diameter. Along the edges are six other similar round, oval, or horseshoe-shaped cairns of rock, and the entirety is what is called a “medicine wheel” or “sacred hoop,” of which there are many across North America, but what the Bighorn Medicine Wheel is the largest, best preserved, and most mysterious of these. One of the mysteries is who built it, as all of the tribes of the area claim that it was not their doing, that it was there before their arrival, and that their traditions speak of it being made by ancient ancestors far back in the mists of time. According to these tribes, it was already ancient before they even came to this land, and it is a claim made all the more compelling in that the Bighorn Medicine Wheel has never been conclusively dated, although prehistoric native people are known to have been here since over 10,000 years ago. Study of the various archeological sites in the same general area typically date all the way back to over 7,000 years ago and artifacts in the immediate vicinity of the wheel have been dated to between from about 900 A.D. to 1800 A.D. One dating of a piece of wood lodged within the structure showed the tree dated to 1760 A.D., but it could have been left here long after the wheel’s creation, and so the exact age of the wheel is a mystery, with most ideas falling between the range of 1,000 to 3,000 years old.

Besides the age of the Bighorn Medicine Wheel, there is little known about why it was made or what it was used for. One interesting discovery was made in the 1970s, when astronomer Jack Eddy did an in-depth investigation of the site and found that the cairns had alignments that suggested some celestial importance. Eddy discovered that some of the cairns aligned with the direction of summer solstice sunrise, while others were in tune with the direction of summer solstice sunset. He additionally found that other cairn combinations created lines of sight to certain bright stars, such as stars Sirius, Aldebaran, and Rigel. The number of spokes in the wheel, 28, was also seen as significant, as it is considered a number tied to lunar cycles by many tribes. In Eddy’s opinion, that made the wheel likely some sort of calendar and observatory for tracking the length and progress of the solar year and other cosmic cycles such as the Moon's phases, lunar and solar eclipse cycles, and planets' orbital cycles. 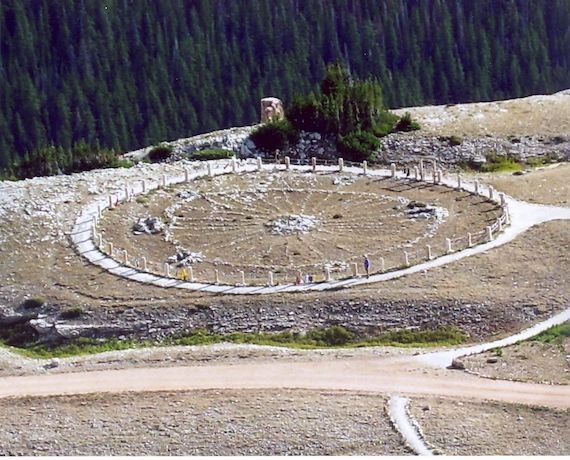 It is also thought that the Bighorn Medicine Wheel was most certainly used for various ceremonies and for vision quests, but the age of the wheel and its exact creators are still murky. Various tribes have described the wheel as being an important place for fasting and it was also said to be a place of healing. One legend says that the Crow tribesman called Burnt Face came here and found his disfigured face completely healed after seeing a vision of Little People. Other chiefs, including the Crow Chief Plenty Coups, Shoshone chief Washakie, and Nez Perce Chief Joseph were said to variously gain insight, guidance and power from the wheel.

In more recent times, the site was named as a National Historic Landmark in August 1970 and was renamed to Medicine Wheel/Medicine Mountain National Historic Landmark in 2011. The area encompasses a large variety of important cultural and archeological sites, but the wheel remains the most well-known and mysterious. In modern days the area is popular with campers and hikers, and the wheel itself it remains a place of mystical power, with many of the regional tribes still utilizing it for rituals and ceremonies, and many New Agers and Wiccans have been drawn to this place as well, braving the steep, treacherous trail up the mountain to be in the presence of this magical realm. This remains an enchanted place full of mysteries we may never understand, and the Bighorn Medicine Wheel still is a unique historical and archeological oddity, as it will perhaps always be.