Located atop a towering picturesque cliff near Montségur, a commune in the Ariège department in southern France, near the Pyrenees mountains, is a remote castle called the Château de Montségur, which comes from the Latin ‘mons securus’, meaning ‘safe hill’. It is a quaint spot full of natural beauty overlooking the scenic French countryside below, with a gorgeous panoramic view of the Plantaurel hills, the Aude Valley and St-Barthélemy Range. It seems like something plucked off of a postcard, but it also holds a long history full of mystery, secret treasures, and darkness that has earned it the nickname of “The Devil’s Synagogue.”

It was to this place that in the very early 13th century the heretical, persecuted offshoot of Christianity called the Cathars came to make a fortress stronghold out of the ruins of a former castle that had sat at the site long before. It was meant to be the center of their activities and a sanctuary away from the Catholic church, which had branded them as heretics and did everything in their power to wipe out the Cathar movement, even having launched a 20-year unsuccessful campaign to exterminate them, called Albigensian Crusade, which had resulted in half a million people accused of being Cathars slaughtered. Although the bloody Crusade ended in 1229, hostilities against the Cathars still went on and the resistance was very active. By 1233 the castle was a symbol of this staunch resistance against the Catholics, the headquarters of the entire Cathar church, and the group’s main base of operations, and it was a good thing they were so heavily fortified and hard to get to, because in 1241 they had to fend off a siege carried out by Raymond VII, Count of Toulouse. However, this was not to be the end of the Catholic Church’s efforts to stamp out what was seen as the last great bastion of Catharism. 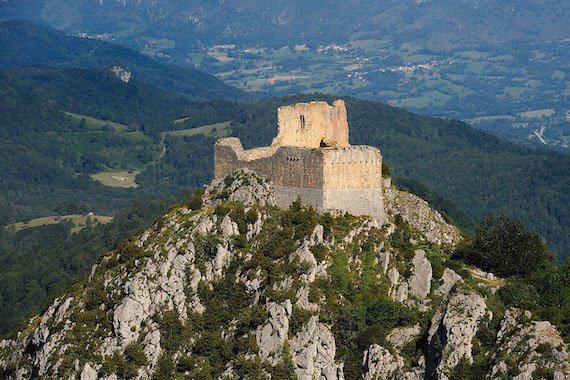 In May of 1242, a group of fifty men from Montségur defied the church by killing two representatives of the Inquisition, a William Arnald and Stephen de Saint-Thibéry, and this would be the last straw. As far as the Catholic Church was concerned, this was an act of all-out war, and they made arrangements to wipe out the Cathar stronghold once and for all. In May of 1243, an army of about 10,000 royal troops led by the seneschal Hugues des Arcis surrounded the Château de Montségur, which itself was mostly occupied by civilians and Cathar adept pacifists known as Perfecti, with only 100 armed fighters there to protect the fortress from the sea of soldiers around them. A long siege was begun in order to choke the Cathars off through lack of supplies, but they were very well-stocked and somehow managed to sneak supplies in through local connections, having no problem waiting out the army.

The siege went on for a full 9 months until the frustrated forces decided to launch a direct attack. This was easier said than done, as the castle was located on a huge limestone rock atop a steep treacherous spire surrounded by cliffs. The enemy was eventually able to secure an area upon which to build a catapult, and this was bad news for the Cathars, as there was only so much of a pounding they could take and very little they could do about it. On top of this, many of the peasant Cathars who lived outside of the castle walls were forced to take refuge within, which stretched supplies thin and caused living conditions to become unbearable. The castle was subjected to relentless bombardment by the catapult, and in March of 1244, 10 months after the siege had begun, the Cathars were finally forced to surrender. In the aftermath, over 200 Cathars who refused to renounce their faith, including women and children, were burned alive in a massive bonfire, many of them willingly marching into the flames as a last act of defiance and middle finger to their attackers, and the air was filled with smoke and the smell of charred flesh. Those who renounced Catharism and embraced the Catholic Church were spared and free to go, and the castle was then smashed and razed to the ground.

Catharism would linger on for several decades, but without its head and in the face of the Inquisition it was dying a slow death, and eventually they faded away into history. The original Cathar castle had been completely destroyed, but the French in later centuries built a fortress upon its ruins, which is the castle seen at the site today. Very little of the Cathar castle remains today, and it mostly exists in history and legend. At the bottom of the cliff side is a modern stele commemorating the death of the victims, reading: "In this place on 16th March 1244, more than 200 people were burned. They chose not to abjure their faith." 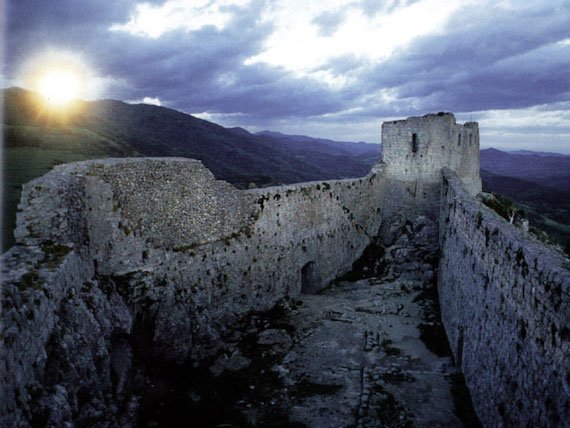 In the centuries since it fell, a good many mysteries and legends have sprung up around the Château de Montségur. One is that they literally cursed the place upon their defeat in order to keep the Catholics from ever using it. There is also the prominent tale of some of the Cathars escaping through secret tunnels into the surrounding countryside, carrying off a secret treasure to hide and protect. It is unknown what this secret treasure was supposed to be, but it has been speculated as being everything from gold, to esoteric knowledge of some sort, to the Holy Grail itself. The location of this alleged treasure has been speculated on and debated ever since, with some believing the fleeing Cathars hid it somewhere in the neighboring cave of Lombrives. A spookier legend of the site is that the ghost of the daughter of the Cathar Raymond de Perella, who was the lord of the castle at the time of the siege, haunts the area, appearing as a woman in flowing white who meanders about the ruins weeping.

This tale has all of the makings of an intriguing legend. Ghosts, lost treasure, a mysterious cliffside castle, historical dark machinations, battles, it is all very compelling stuff. Whether any of the more fringe ideas about the Château de Montségur are true or not, it is a place steeped in dark history and mystery, and will likely remain lodged in the legends of the area for quite some time to come.