Venus is in the news a lot lately, with astrobiologists claiming that the presence of phosphine high in the toxic atmosphere above the planet’s hellish surface is a sign that floating life forms are present there. However, a different group of scientists is looking into the Venusian past and has found evidence that the planet once teemed with life on the level of Earth … until Jupiter (yes, that one) migrated out of its current orbit, swung around the solar system and altered the orbit of Venus – killing off any life and making it the uninhabitable hellscape it is today. Is a planetary apology in order?

“I focus on the differences between Venus and Earth, and what went wrong for Venus, so we can gain insight into how the Earth is habitable, and what we can do to shepherd this planet as best we can.” 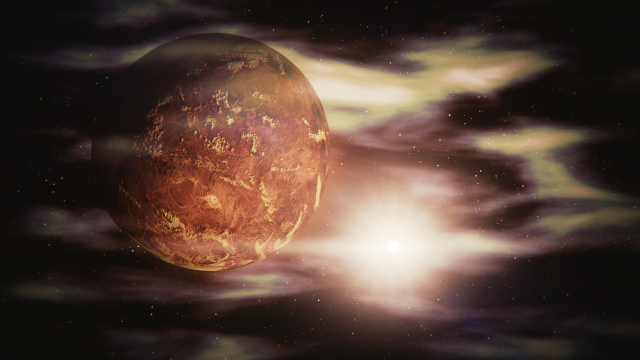 You may wish there was more focus on what went wrong for Earth in 2020, but University of California Riverside astrobiologist Stephen Kane instead led a study, published this week in the Planetary Science Journal, into what might have happened to Venus – a planet that many astronomers believe was once as hospitable to life as Earth. Kane looked for some obvious differences and one jumped out – the orbit of Venus is a perfect circle, while Earth and the rest of the planets in our solar system follow an elliptical path. This means Venus never gets any variety in climates or a chance to cool off from the Sun’s heat. But that alone shouldn’t have killed all life plus any future growth, should it?

“As Jupiter migrated, Venus would have gone through dramatic changes in climate, heating up then cooling off and increasingly losing its water into the atmosphere.”

Kane knew from observations of other star systems and exoplanets that gas giants like Jupiter tend to migrate or dance around their stars early in their life cycles. Feeding that into a model of the formation of our own system, it showed a young Jupiter moving close enough to Venus, which was then in an elliptical orbit, to first draw away its water with its massive gravity, and then pull Venus into the circular orbit that made this change permanent.

“(It may be) the last surviving species on a planet that went through a dramatic change in its environment.”

In a nod to the recent discovery of phosphine in the greenhouse gas hell that is the atmosphere of Venus, Kane says it could be remnants of the planet’s last sole survivors – ones that, if they have tiny fingers left, are pointing one of them at the big fat murderous gas bag that is Jupiter. On the other hand, conceding that it’s seemingly impossible that these life forms could have survived a billion years suspended over Venus, Kane admits “There are probably a lot of other processes that could produce the gas that haven’t yet been explored.” More research is needed.

In the meantime, what might we find out if we feed Earth 2020 into that model?