Some UFO and alien encounters can be even stranger than usual. In some cases we have accounts that just seem on the surface to be particularly absurd and outlandish, often leaving us with no idea what to make of them. Such accounts can serve to generate much controversy and debate, and one of these is certainly the time a farmer in Wisconsin supposedly met a trio of aliens that gifted him some pancakes from space.

One of the weirdest UFO encounter cases I’ve ever come across started on the morning of April 18, 1961, in a rural area of Eagle River, Wisconsin. On this morning, a 60-year-old chicken farmer by the name of Joe Simonton sat down out on his porch to enjoy his breakfast on a calm, peaceful morning, but the day was about to deviate into the strange. As he sat there eating and looking out over his chicken farm, Simonton allegedly had his peace ruined by a loud sound like "knobby tires on wet pavement” coming from behind the house. It was an odd enough sound that he went back there to investigate, and it was then that he saw a silver disc measuring about 12 feet high and 30 feet in diameter and with something like come “exhaust pipes” on the side came down out of the sky to hover over his property, and as it did things would get even more bizarre. 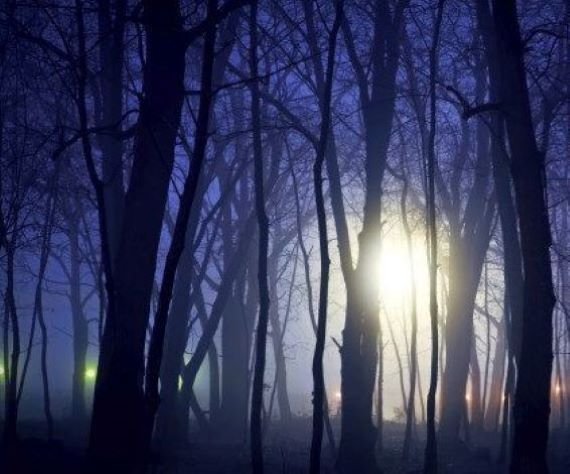 According to Simonton, a hatch opened on the bottom of the otherworldly craft, and out crawled three little dark-skinned men about 5 feet in height, dressed in what looked like two-piece black suits, turtlenecks, and helmets sitting atop their heads. Simonton would say the strange little men were “Italian-looking,” and they were holding something that looked somewhat like a jug. The beings approached him and gestured with their jug, and although they were completely silent Simonton was hit by the strong message in his mind that they wanted him to fill it with water. He took the jug from them, which he described as “a beautiful thing, a Thermos jug-like bottle quite unlike any jug I have ever seen here on Earth,” and filled it with water, and as he was doing that two of the entities took out a device that was sort of like a flameless gas grill. When Simonton returned with the water, the aliens were hard at work purportedly cooking something on their little grill, which on closer inspection looked something like pancakes. The creatures then popped a stack of the “pancakes” off of the grill, each of them roughly 3 inches in diameter and perforated with small holes, and gave it to Simonton, before saluting him and getting back into their craft to fly off at such speeds that it was “gone in two seconds.” The farmer was left there with this stack of alien pancakes in his hands, and he would later tell reporters:

If that was their food, God help them, because I took a bite of one of them and it tasted like a piece of cardboard. If that’s what they lived on, no wonder they were small. ... When they left I stood there in the driveway with a pile of greasy pancakes and my mouth open wondering what the heck I just saw, what happened.

Although it sounds far too weird to be true, amazingly there were other eyewitnesses who saw the same UFO fly over the area, and this caused the whole thing to draw the attention of the United States Air Force and the National Investigating Committee for Aerial Phenomena. The mysterious pancakes were analyzed by the Food and Drug Laboratory of the U.S. Department of Health, Education, and Welfare, who came to the rather mundane conclusion that they were made up of hydrogenated fat, starch, buckwheat hulls, soya bean hulls and wheat bran. Did that mean they weren’t from aliens? No, but it certainly didn’t paint them as anything that proved they were from otherworldly beings either. As this was going on, the story was being picked up in newspapers, with many of the reports decidedly tongue in cheek, and Simonton and his space pancakes were becoming a sort of laughing stock. However, he stuck by his story, and the Air Force investigator Dr. J. Allen Hynek would come to the conclusion that the man at least really believed what he was saying. Hynek would say:

There is no question that Mr. Simonton felt that his contact had been a real experience. Simonton answered questions directly, did not contradict himself, insisted on the facts being exactly as he stated and refused to accept embellishments or modifications. He stated he was sure that we wouldn't believe him but that he didn't care whether he was believed. He stated simply that this happened and that was that. He appeared quite sincere to me, did not appear to be the perpetrator of a hoax.

An odd detail to the case that doesn’t seem to be mentioned too often in articles on the matter is that in the days after the encounter Simonton would claim that dozens of his chickens got sick and died. He was sure that it had to do with the UFO he had seen, and told a local Judge Frank W.Carter about it, who would then write:

Simonton informed me that 23 chicken died since April 18th and thought maybe that may have been caused by the alleged Saucer. He sells eggs to customers in town here, and the sheriff, County Agricultural Agent and myself drove out, from a Health standpoint, to see IF the eggs might' be affected by radiation. We took one diseased chicken to a local vet who "thought" the chicken MIGHT be sick from Food deficiency, and becoming cannibals, pecking at each other, where feathers drop off and kill each other. No Geiger was used however.

Making it all even odder still was that there were many rumors surrounding the case, including one perpetuated by pulp flying saucer magazine publisher and UFO researcher Raymond Palmer, who put out the rather bizarre theory that Simonton had been hypnotized by an Eagle River real estate broker and the whole thing planted in his head as a part of a real estate scam to get the farmer off his property so that a “miniature Disneyland” could be built. Right. In the meantime, as far as the U.S. Air Force was concerned, the case was labelled as simply “unexplained,” and then sort of swept away and forgotten. Considering that the pancakes are long gone and the case has mostly faded away, we are left to wonder just what went on here. Was this a hoax perpetuated by Simonton or some sort of delusion? Or was there perhaps something more to it all? We will probably never know, and it remains one of the weirdest alien encounter cases there is.

Neanderthals May Have Isolated Themselves on a European Island 120,000 Years Ago